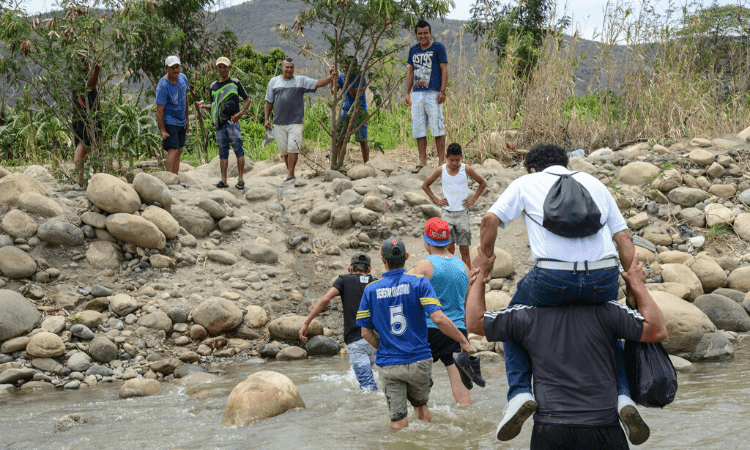 On July 6, businesses on the Venezuela-Colombia border published an open letter urging both countries to allow the restart of economic activities. A double whammy of lockdowns and damaged diplomatic relations has hit the region hard, turning it into a no man’s land and exacerbating poverty and crime.

Extortion, kidnapping, and human trafficking have become part of daily life as drug gangs, such as the Rastrojos and Pelusos, battle with Marxist guerrillas for control of the territory.

Whereas Colombian President Iván Duque tries to reassert dominance through military operations, Venezuelan strongman Nicolás Maduro adds fuel to the fire by supporting left-wing vigilante groups called colectivos. A standoff between both governments climaxed in February 2019, when Maduro broke relations with Colombia and expelled its diplomats. The border has remained closed since mid-March.

Unfortunately, there is no end in sight to the violence due to five factors feeding on each other: mass migration, turf wars, smuggling, cocaine production, and lawlessness.

Venezuelan Migrants between a Rock and a Hard Place

Lockdowns to contain the COVID-19 pandemic and the ensuing economic plunge in neighboring countries have left thousands of Venezuelan migrants unemployed. Two million had fled to Colombia over the years to try to eke out a living. Thousands are now returning to guaranteed poverty in their home country.

Unable to afford the scarce flights, migrants are traveling back with their families by land. However, crossing into Venezuela has become a nightmare; official checkpoints remain closed and let only a few in each day.

Those who cannot wait try their chances at trochas, illegal crosspoints that are the battleground between guerrillas and gangs. Migrants can, therefore, get caught in the crossfire or fall victim to theft and kidnapping.

The dwindling economic activity within bordering cities does not allow for reliable jobs. In Cúcuta, Colombia, 73 percent of the economy is informal or outright illicit. Poverty rates in Guanía and Guajira, two regions bordering Venezuela, are 65 percent and 51.4 percent, respectively.

Across Colombia, the unemployment rate will jump to 20 percent by the end of the year, according to the independent think tank Fedesarrollo. Remittances, which make up a large share of poor households’ income, are expected to drop by 30 to 45 percent.

The Venezuelan economy is even more fragile, devastated by years of socialism and disarray. Food prices have soared by 150 percent since COVID-19 arrived; nine out of 10 Venezuelans cannot afford basic necessities. Shortages of water, electricity, gas, and gasoline are commonplace.

Since lockdowns began in Colombia, organized crime has murdered nine social leaders and expanded their operations to fend off rival groups. For years now, traditional smuggling and drug gangs have had to contend with the increasing presence of ideological, terrorist groups such as the Colombian National Liberation Army (ELN) and the leftover Revolutionary Armed Forces of Colombia (FARC).

Shootings across the border have increased, exposing civilians to stray bullets. Executions pile up. In March, the Colombian police found eight corpses with gunshot and burn wounds in Cúcuta. The same day, five bodies turned up in Ureña, Venezuela.

Due to the pandemic, the ELN has taken upon itself to impose lockdowns. The radical left-wing guerilla has declared a ceasefire and threatened to kill residents who violate the quarantine. Nevertheless, the Colombian government continued with military incursions. On July 4, President Duque announced the capture of two ELN leaders.

In August 2019, Human Rights Watch (HRW) visited the border cities of Arauca, in Colombia, and Apure, in Venezuela. They interviewed 105 people, including community members, justice officials, journalists, and activists.

HRW confirmed that “non-state armed groups use violence to control peoples’ daily lives.” According to the testimonies, “They … threaten civilians on both sides of the border, subjecting those who do not obey to punishments ranging from fines to forced labor to killings.”

When Venezuela’s economic crisis worsened in 2013, the trochas became a key revenue stream for criminal groups. They charged between $1 and $25 to the hordes of Venezuelans leaving the country and also smuggled gas, minerals, and drugs.

The border closure has brought a threefold increase to the crossing “fees” at the busiest crosspoints. Gas, once abundant in Venezuela and smuggled even by officials, is increasingly scarce. Human and drug trafficking now make up the bulk of illegal trade.

Javier Tarazona, the director of Fundaredes, a human-rights advocacy group, has reported that gangs struggling due to the lockdowns have led to more confrontations, disappearances, murders, torture, and extortion.

The dwindling activity has also hit the approximately 400 Venezuelan refugee families in precarious settlements in Guainía, Colombia, who used to make a living out of smuggling whatever was needed across the border.

According to the US Drug Enforcement Administration, most of the cocaine crossing Guatemala towards the United States comes from Venezuela, Colombia, and Ecuador.

Those shipments have grown by 57 percent from 2012 to 2017. During the pandemic, the Sinaloa and Jalisco cartels have expanded their presence in Colombia and have injected capital to ensure a steady cocaine production.

The drug enters Venezuela through trochas and then finds its way to Central America with the help of corrupt military and political officials. In 2018 alone, 265 tons of cocaine crossed into Venezuela from Colombia. The practice is so brazen that the US government has charged Maduro and a dozen of top officials with “narco-terrorism” for flooding the country with the drug.

The vast 1,400-mile border Colombia shares with Venezuela has always been particularly vulnerable to guerrilla takeovers. But the situation got worse when Hugo Chávez took office in Venezuela, deploying his socialist agenda at home and abroad.

Chávez first provided Colombian guerrillas with arms and safe passage when needed. With the Maduro regime, Venezuela is now home to FARC fugitives of the Colombian justice such as Iván Márquez, who announced the creation of a new guerrilla group in August 2019.

Given the pressure of the United States, Colombia, and the international community for Maduro to leave power, the ruling socialist party of Venezuela openly promotes a proxy war by supporting the ELN and FARC. Non-state armed groups supported by Maduro have joined land disputes and extort Venezuelan migrants living in northeastern Colombian cities.

The Venezuela-Colombia border is a ticking time bomb in the hands of insurgent groups and drug lords. It poses serious threats to the national security of both countries, of Central American nations, and the United States. The Colombian government can only do so much; short of a regime change in Venezuela, the violence will keep spiraling out of control.