Hecht: An Obama Third Term Is on the Ballot
Skip to content 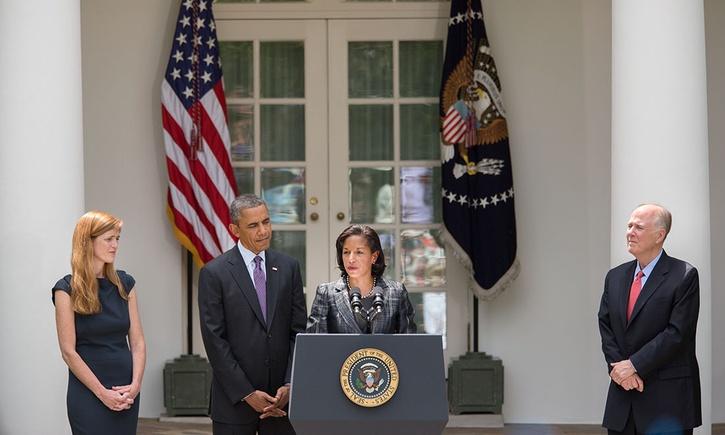 Rice has proved herself a loyal member of Obama’s cabal, prepared to do anything to promote a one-party state. (The White House)

Susan Rice is the logical choice for Joe Biden’s running mate, to be announced by August 1. A woman of color, she checks two critical Democrat boxes. Her many recent media appearances are not coincidental.

Her ironclad loyalty to Barack Obama is even more important. The former president is indispensable for a Biden victory, and Obama wants to finish his transformation of America.

Rice was on Meet the Press on July 5 in the traditional vice-presidential attack-dog role. She appeared on the same show on September 16, 2012, to lie about events in Benghazi—which ended in four American deaths, including Ambassador Chris Stevens.

The Obama team knew a terrorist attack had killed our people. With only seven weeks before the election, they needed a cover story. However, the fabrication was an assignment not even Hillary Clinton would take.

According to testimony to the House Select Committee on Benghazi, the first person the White House wanted was Clinton. She passed. They turned to national-security advisor Tom Donilon. He also refused.

With contempt for the American people and the truth, then US Ambassador to the United Nations Rice lied for the administration on five Sunday shows. She said the tragedy had been spontaneously provoked by an obscure video circulated days before in Egypt. When confronted with the facts, the Obama administration later acknowledged the attack was pre-planned.

Rice’s deceit demonstrated loyalty to Obama, but it cost her the opportunity to be secretary of state. The Senate would not have confirmed her, so Obama made her national security advisor.

On Meet the Press this July, Rice fomented fake news by claiming President Donald Trump was ignoring Russian bounties on US troops in Afghanistan. She said, “The message to Vladimir Putin is, ‘You can kill American servicemen and women with absolute impunity’ … The president of the United States has demonstrated absolutely callous disregard for the safety and security of American forces in a war zone.”

Obama knows he will have to carry Biden, with diminished faculties, across the finish line. Rice’s loyalty to Obama and the radical left and her disregard for truth make her the perfect choice for running mate.

The New York Times recently ran a front-page Sunday article depicting Obama as a reluctant entrant into the 2020 political fray. This is as absurd as Rice’s Sunday appearances are coincidental.

The Times waxed: “More than three years after his exit, the 44th president of the United States is back on a political battlefield he longed to leave, drawn into the fight by an enemy, Mr. Trump, who is hellbent on erasing him, and by a friend, Joseph R. Biden Jr., who is equally intent on embracing him.”

Obama has a larger stake in this election than anyone in the country. He wants to complete his transformation of America, expand the revolution we see in our cities to the entire country, and protect himself from prosecution.

I know because I witnessed Obama and Biden imposing the successors of Fidel Castro-supported guerrillas on Guatemala, where I have lived for nearly 50 years. I saw Obama’s and Biden’s willingness to break any law to achieve their objectives. Even before information emerged from Obamagate, I knew Obama and Biden had criminally attempted to fix the 2016 election and later remove Trump.

Trump’s reelection could for generations ruin Obama’s socialist agenda. Unhampered by Obama’s sabotage, Trump could produce a better economy than before via deregulation, lower taxes, and reciprocal trade deals.

As they did in Guatemala and as Democrat officials at the state and local levels do now, Biden officials would protect the criminal gangs on our streets and persecute their political opponents.

Recently declassified documents lead to Obama and show Rice was part of the efforts against Trump. On their final day in office, she sent herself an e-mail stating multiple times that everything the administration had done to surveil the Trump team was at Obama’s order “by the book.” Rice lied when she said she knew nothing about Trump surveillance. She has an interest in squashing the Durham probe.

Rice has proved herself a loyal member of Obama’s cabal, prepared to do anything to promote a one-party state. Obama will be the real president if Biden wins, and his socialist agenda will continue through Rice.