Memo: Who Is the Future US Ambassador to Guatemala?
Skip to content 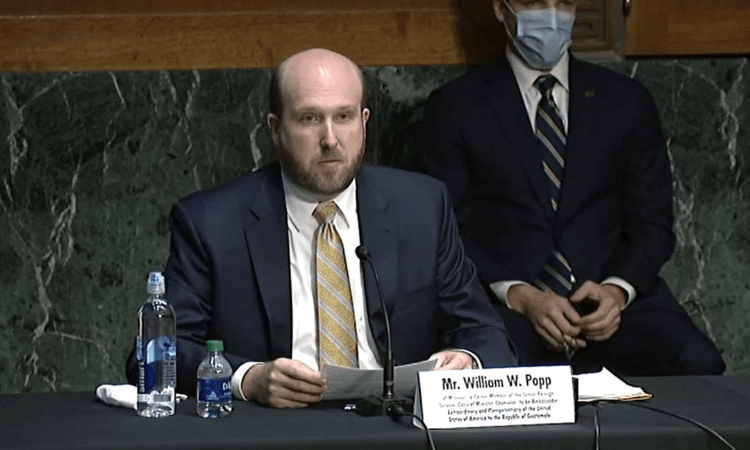 On May 28, President Donald Trump announced his will to nominate career diplomat William Wayne Popp to replace Luis Arreaga as the US ambassador to Guatemala. The nomination has received approval from the US Senate’s Committee on Foreign Relations and is pending confirmation from the full US Senate.

Popp holds a B.A. from Westminster College, a M.A. from George Washington University, and a M.S. in national security strategy from the National War College. He speaks Portuguese and Spanish and has received several US State Department awards.

What has been current Ambassador Arreaga’s performance during his tenure?

Upon arriving in Guatemala in October 2017, Luis Arreaga began supporting the now-defunct International Commission against Impunity in Guatemala (CICIG). The CICIG, a foreign entity backed by the United Nations and the country’s progressive elites, had an interest in tilting the 2019 Guatemalan presidential election. In 2018, the Supreme Electoral Tribunal (TSE) allowed the CICIG to play an illegal role in overseeing political campaigns, media coverage, and voting procedures.

Arreaga put the US embassy’s full weight behind the CICIG, even though its unchecked power had led to abuses in criminal investigations and the appointment of judges and prosecutors. In the run-up to the election, the ambassador publicly expressed his support for Sandra Torres, the left-wing National Unity of Hope’s presidential candidate.

In July 2019, Judicial Watch reported Arreaga was collaborating with a group of US State Department officials to undermine Trump’s immigration agenda.

Arreaga tried to sabotage the signing of an asylum agreement between Trump and then Guatemalan President Jimmy Morales to reduce migration toward the United States and to promote economic opportunities in Guatemala. Several media outlets reported the White House called Arreaga after the first deal fell through. Nevertheless, both countries ended up signing the agreement at the end of July.

Has Popp or his previous offices been involved in any controversies?

In light of the unprecedented fires that ravaged the Amazon rainforest in 2019, 12 Democratic senators sent an open letter to Popp, then chargé d’affaires in Brazil. They urged Popp to engage with President Jair Bolsonaro. For the US lawmakers, Bolsonaro’s policies were fueling deforestation in the Amazon.

On September 27, 2019, the US embassy in Brasilia released a statement in which Popp said, “The United States is working closely with Brazilian experts to combat and minimize the harm of this year’s Amazon fires.”

In addition, the US embassy, headed by Ambassador Todd Chapman, has been involved in a series of conflicts about the US-China trade war. The latest controversy concerns Brazil’s plan to deploy 5G technology with Huawei’s support.

In December 2016, Kenyan President Uhuru Kenyatta accused the United States of trying to meddle in the upcoming presidential and parliamentary elections. As a result, he decided to suspend a US aid program to provide electoral assistance. Robert Godec, then US ambassador to Kenya, rejected the president’s statement and claimed the United States just sought to promote free, fair, peaceful, and credible elections.

However, citing persistent irregularities, Odinga withdrew from the October election and asked his supporters to stay home. His name remained on the ballot, and the turnout was more than 60 percent less than in August. Kenyatta came out on top once again.

What media appearances has he made?

Where does his nomination stand and what has been the reception so far?

On July 23, the Senate’s Committee on Foreign Relations held a hearing on Popp’s nomination. During the event, Popp laid out his plan for the US embassy in Guatemala. On July 29, the committee unanimously greenlighted his nomination and included it in the Senate Executive Calendar for a full vote. If confirmed by the Senate floor, Popp will take office in the last quarter of 2020.

Popp has no known adversaries so far, and observers across the spectrum have commented he is a professional diplomat without political affiliation. Whether he will follow in the footsteps of his predecessor or respect the rule of law in Guatemala remains to be seen.