US State Department Prepares to Steal an Election
Skip to content 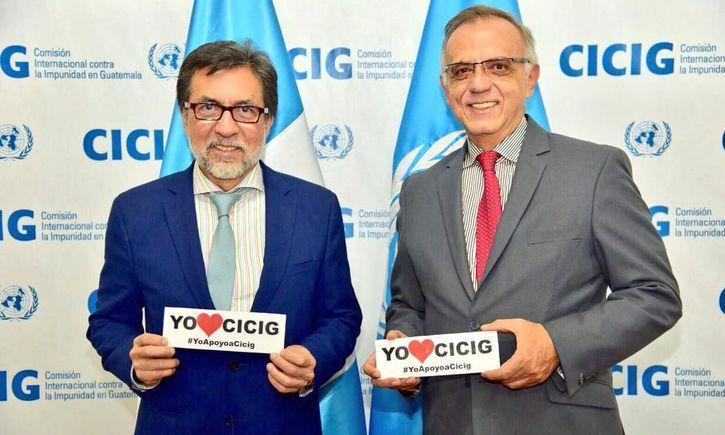 The United Nations created a commission, known as the CICIG, to prosecute clandestine security organizations in Guatemala, but do you think the globalists stopped there?

The question answers itself. The latest move from the CICIG beyond its legal terrain is the signing of an agreement on August 16 with the Guatemalan Supreme Electoral Tribunal to, among other roles, monitor media coverage of the 2019 national and local elections.

On its face, such a role might seem benign, but observers of CICIG history—including many illegal and questionable actions—know its ideological motives and allies. The most notable and indispensable ally, in addition to militant collectivists in Guatemala’s judiciary, is the State Department.

Obama holdovers and anti-American career bureaucrats of the State Department, working with the CICIG, want to impose a collectivist electoral heist to complete a totalitarian takeover of the country, à la Nicaragua. US Ambassador Luis Arreaga is complicit in this unholy alliance. Earlier this year, he gave an emphatic photo endorsement of the CICIG, and recently he met with members of the electoral tribunal.

The CICIG, which first arrived in 2006 on a narrow mandate and agreement with the Guatemalan government, now dominates the Central American nation. Although UN appointed, the CICIG is completely unaccountable, and its commissioner has defied a persona non grata declaration from the Guatemalan president. Commissioner Iván Velásquez, while facing no repercussions for his own malfeasance, has requested the lifting of President Jimmy Morales’s immunity from prosecution.

The CICIG mandate provided for the foreign organization to advise the Justice Ministry on how to identify and dismantle criminal networks that deprive inhabitants of their human rights. In collaboration with the State Department, the CICIG has leveraged its power to co-opt the criminal-justice system, and it has used tactics that would make dictators such as Hugo Chávez and Fidel Castro smile with approval from hell.

Even as the CICIG’s illegality has grown more brazen, the State Department has been its primary, steadfast advocate. Former Vice President Joe Biden traveled to Guatemala three times in the span of a single year and declared CICIG continuance a requirement for US aid.

Perhaps flying under the radar of the Trump administration, the Obama policy has continued on into the new tenure. While President Morales has done the right thing and proved to be an ally to the United States and President Donald Trump—for example, by moving the Guatemalan embassy to Jerusalem—the standoff with a wayward State Department has fomented instability and hostility in Guatemala.

The State Department and its allies, which include powerful private-sector persons, use both illegal actions and deceitful propaganda to promote their agenda: collectivist dominance of the nation, including in the presidential palace. As described in a recent report by four civic organizations, the CICIG has repeatedly jailed political targets without evidence and in violation of law and due process.

Guatemala’s progressive media have fallen into line and been co-opted by the CICIG and its allies. Intimidated and naive journalists barely report CICIG violations of the law, while they mercilessly attack President Morales.

The climate of fear crosses all political and economic lines. In effect, people of means and conviction are scared, and they mostly abstain from activities that would push back against the foreign-led takeover. This silence has consequences, since Guatemala is one year out from elections.

The State Department and congressional allies—such as Senator Patrick Leahy (D-VT) and Representatives Norma Torres (D-CA) and Elliot Engel (D-NY)—have cooperated in efforts to suppress the truth about the CICIG. They employ the collectivist strategy of division, creating a false binary narrative of themselves as pure and their critics as corrupt. Their efforts, unfortunately, have succeeded in reversing the hold by Senator Marco Rubio (R-FL) on $6 million of US taxpayer money destined for the CICIG.

Torres and Senator Ben Cardin (D-MD), by injecting a little-known provision into the National Defense Authorization Act, have also given carte blanche to the State Department to “provide Congress with a list of individuals, including government officials, who have committed serious acts of corruption, drug trafficking, and illicit campaign finance.” Trump signed the NDAA into law on August 14, and the name-and-shame ritual with legal consequences will take place within the next six months.

“The individuals named in the list required by the legislation could be subject to asset freezing and visa denial,” states the press release from Cardin. His Orwellian message, “to combat corruption,” sends a clear message to anyone who might dare oppose the CICIG and the State Department.

Trump and Secretary of State Mike Pompeo are obviously busy with vital issues such as North Korea, Iran, China, Russia, and Turkey. However, those priorities have ceded control of Central American policy to the Obama holdovers and career bureaucrats, who will put their political enemies on the list and protect their criminal allies. Those allies include corrupt judges who protect the flow of illegal migrants and narcotics to the United States.

Members of Guatemala’s Congress, speaking on condition of anonymity, have said CICIG pressure for them to strip Morales’s immunity is intense. They fear persecution if they don’t vote in favor, which would send Morales to prison on bogus charges. Such an imprisonment would remove a Trump ally, and it would grease the wheels for stealing the 2019 elections.

Other US agencies, such as the Defense Department and CIA, are aware of the CICIG and State Department activities, and perhaps the message will get to Pompeo and Trump in the near future. That means the holdovers and their allies are in a race against time to get Morales out of the way, to prevent him from working with Trump and to further facilitate stealing the presidential election.

One way to foster development and maintain a good partner in Guatemala is through genuinely open, transparent, and competitive elections. The Trump administration, especially the National Security Council and Pompeo, must take a close look and undo the damage done to both Guatemala and US national security.