Nights in the Gardens of Havana
Skip to content 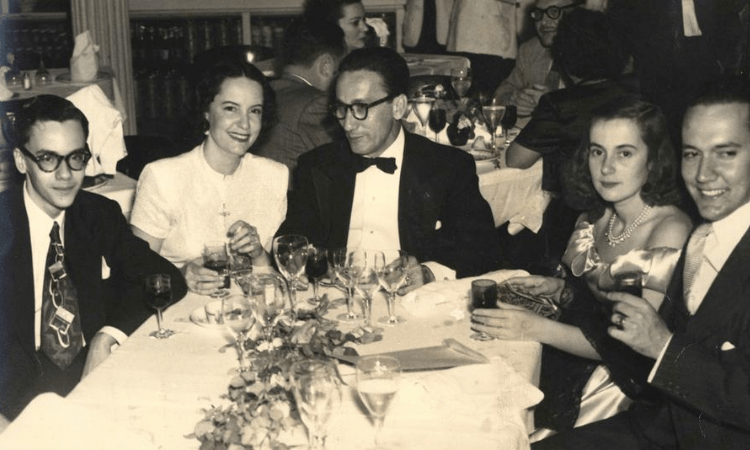 Havana, circa 1950. The photo above presents the four leading actors in this story, plus one other who will make a crucial contribution.

At the start of many narratives you see the phrase, “inspired by a true story.”

As it happens, every story on earth is a “true story.” That includes the apocryphal story, which often has more value than the one governed by literal truth.

That said, the present work is a history which aims for literal truth. All the characters are portraits of actual people. No one is a composite. All bear the names to which they answered in life, including nicknames, pet names and underground names.

Almost everything here comes from direct experience and testimony of the main characters. Virtually all the dialogue is from first-hand accounts. Imagination is used to envision how things were; never to construct alternatives.

It’s amazing how much apocryphal stuff makes its way into venerated works of history. And speaking of veneration, the only people in this tale who look for it are the heads of state who come and go.

The principal players were not heads of state or anything close. In life they had their dreams of glory. But now, if they could speak from the beyond, they would only ask for truth. Even in going for glory, they were obsessively faithful to facts. And they paid a high price for their scruples. The least one can do in a story about them is to apply the same standard.

Havana, circa 1950. The photo above presents the four leading actors in this story, plus one other who will make a crucial contribution.

In the center is Adolfo Rivero Rodríguez (1904-1975), a Cuban newspaper correspondent who in 1950 is serving as head of the presidential press corps. Outside the family he is called “Riverito” – little Rivero – while within the family he is viejo, Dad.

Riverito has taken a long road to this table. He was born to a farming family in Camagüey province, with a father and sons tilling the land. The youngest of nine sons, little Rivero wished for another kind of life.

At age twelve – after a beating from his oldest brother, enforcing Father’s will in the old-fashioned way – Riverito fled from home. Instead of coming back next day, he was gone. Only later did his family learn that he had crossed hundreds of miles to the dreamscape city of Havana, where he learned to be a productive citizen.

Riverito never broke with his family. In his early 20’s he attended an older sister’s wedding and fell for 15-year-old Delia Caro, daughter of the groom. Riverito and Delia were married and quickly joined by a son, Emi, who was born in the house of a former nemesis – Riverito’s oldest brother.

Riverito took his young family to Havana, where he stood a better chance than in the depressed countryside. He earned a living as a photographer in the city’s cafés, also running errands for a newspaper editor. In 1933 he landed a job as an assistant reporter at the Presidential Palace.

By 1950 Riverito is one of the country’s leading journalists, a friend to presidents and to the major players in Cuban politics. In a short time, when he completes his term as chief of the presidential press corps, his fellow journalists will give him a plaque inscribed with his qualities – “dynamic, excitable, untiring, and ready to serve.”

At Riverito’s side in the photo is his wife Delia Caro Valdés (1912-1983), nearly always called vieja or Mom. Brilliant and beautiful, inspiring in her personal power, la vieja is the prime mover of her family; everyone cedes to her.

Next to la vieja is her younger son Adolfo Rivero Caro (1935-2011) – a lad by himself, gazing into the unknown. Shy and timid, with a big ambition beneath, he is already placing bets for his father and uncle at Havana’s jai alai matches. In a few years he will be a communist revolutionary.

Across from Adolfo is his elder brother and near-namesake Emilio Adolfo Rivero Caro, or Emi (1928-2016). An attorney and journalist, Emi is still in thrall to his father. But two years hence, when Batista seizes power in a coup, Emi will strike out on his own. At heart Riverito is a courtier while his older boy is an insurgent. Throughout the 1950’s Emi will fight for Batista’s overthrow. Starting in 1959, when a new ruler comes to power in a coup and shows his colors, Emi will fight even harder to overthrow Fidel.

Next to Emi in the photo is his wife Lizbet – not her given name but the name of Nietzsche’s sister, which Emi bestowed on her during their high-school romance. Now with a little Emi of their own, the two are gone from the world of gods and heroes and are smack in the middle of a young family’s struggles.

A few years from now, with Adolfo joining the ‘rejected sect’ of communism and Emi vowing to “die in the street if necessary,” Riverito and la vieja will wonder – in Emi’s words – “Where do they come from, these beings to whom we gave life?”

They come from a vortex, yet unseen, that’s about to devour their society.