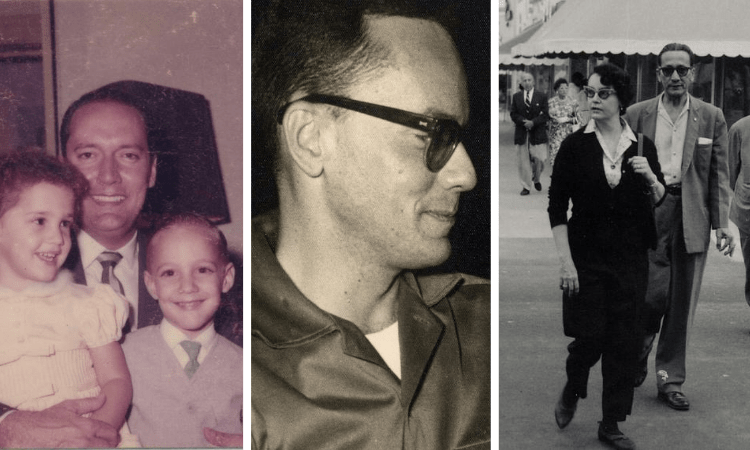 Portraits of a family. From left: Emi with his younger kids in Miami, early 1961; Adolfo in his officer dress; and los viejos in Miami Beach, early 1961.

The same day America was electing a new president, Brand was in Washington briefing his principal CIA contact.

“Let’s not push the panic button, Brand,” J.B. said back in his best aggressive-defensive manner.

The CIA was now committed to overthrowing Castro. The agency had put millions of dollars, months of effort, and its priceless reputation on the line. J.B. didn’t relish the idea of going to his superiors and telling them: “One of my men has come back from the Cuban underground and says we’re headed for disaster.”

“Let me ask you, J.B. How many men do you have training in Guatemala?” At a group of CIA enclaves there, a Cuban force was preparing for an invasion of the island.

“In Guatemala we have close to a thousand men,” J.B. said, hinting that the agency had an extra force tucked away somewhere else.

“Then what can the resistance do?” J.B. asked with an implied threat: If your next answer does not measure up, you lose us.

“The resistance can create chaos!” Brand said with energy. “In a moment of crisis and confusion, the people inside the government and the army who dislike Castro’s policies will have their opening. They are a small minority, no question; but if they get a cue from the underground they can do something decisive. The task of the underground is to give them a clear opening – an incentive to act.”

With his answer, Brand had flipped J.B. as in a judo move and pinned him to the mat. All at once the American was not speaking down to him but up.

J.B. said: “What I’m asking you to do is to go back, get your people together, locate drop-zones, let us know about them, and we’ll send you what you need. The invasion force is getting restless. We can’t keep those men in Guatemala much longer. We have to go faster. The heat is on. You do your part of the deal and we’ll do ours.”

“J.B., I’m burned,” Brand replied. “In Havana I have no chance to survive more than 45 or 50 days. I think I should go to a rural area. I can move in and out of Havana, I have friends in Havana and I can act through them. But I should have my center of activity elsewhere. If not, I’m going to get caught.

“One thing more: you constantly insist that time is short. Don’t send me into Cuba without weapons. I have already used lots of time looking for drop-zones and organizing reception committees. Send the weapons ahead of me. That way I can give full time to the preparation and execution of my plans.”

J.B.: “This time you’ll go in with your own radio operators. We have men in Guatemala preparing for your mission. You’ll meet with them, be with them and see which men suit you. Two of your choice will go in with you. Pick a night with a waning moon and go in as soon as you can. We’ll give you the maps. Just send us the coordinates, the exact times and the signals. We’ll drop the equipment for you.”

Brand: “J.B., it will not work. Don’t make me waste my efforts and time. Put the weapons there first.”

J.B.: “I understand what you are saying, I see your reasons, but in this matter of sending weapons ahead of you, we don’t agree.”

In the following days, and contrary to his fears, Brand got encouraging news. “The Viking,” a man with whom he had worked closely the previous summer, now told Brand that J.B. was deeply disturbed by his report, and was giving clear accounts of it to the heads of the agency.

From other sources Brand heard sketchier stories; one of those being, “We have 25,000 men in reserve.” That number could only mean the US was going to use its own troops.

A suggestive piece of evidence fell from the lips of J.B. himself: the invasion plan included a force of 30 PT boats.

That figure was important for what else it meant. The invasion force would include many different kinds of vessels. Brand, having a good grasp of military configurations, could quickly extrapolate the size of the other components. J.B. had just told him the invasion force would be huge – something in excess of a hundred thousand men, with full air support.

He had some family affairs to settle. In recent months the locus of his personal affairs had moved to the city of Miami, which had swollen with the outflow of Cubans from the island; it was already becoming another Havana. In addition to his two youngest kids and their mother, Brand had also gotten his parents to Miami, where they could live among people they had known all their lives.

Thanks to Brand’s contacts, el viejo now had a job more in keeping with his background. He was working for the US government as an analyst, scanning newspapers and journals for trends in Spanish America. It was a big step up from carrying kitchen trays. But he was a far piece from his former self.

In Miami Brand spent as much time with the kids as he could. How it moved him, every time he came back to the house from one of his trips, to find his not-yet-three-year-old daughter Ermi short of breath, hyperventilating with excitement at his approach; and how he loved Rubén’s mispronunciations, as when he showed the boy some object, saying, “¡Rubén, mira qué lindo es!” Rubén, look at how pretty that is!

With Pelén, however, his heart was finished. Like the fair-minded man he was, he held himself accountable for the distance that had grown between them and took on the task of making an honorable end.

He flew to Key West for a meeting with Pelén’s father and mother, who by now had settled there. Sitting with them in a car, he said: “I’ve come to tell you I plan to ask for a divorce from your daughter.”

Dr. S., who spoke for the family in such matters, gave back to her son-in-law a pair of lines that the authors of Carmen had somehow left out of their show:

Listen closely to what I say.
Watch out! I will destroy you some day.