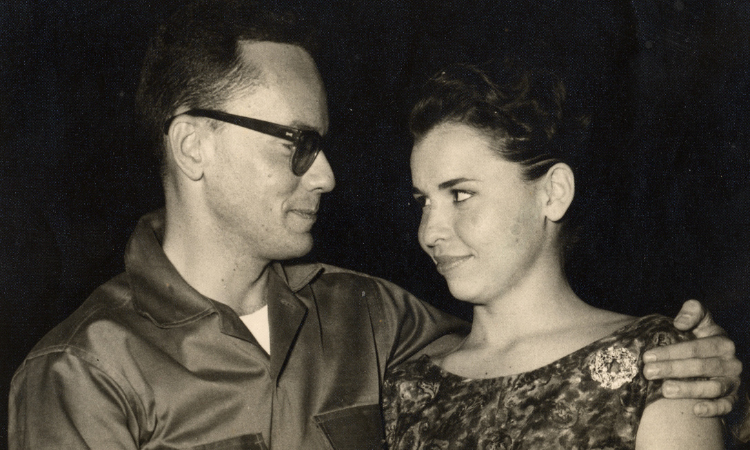 In the revolution's jaw: Adolfo and Marisa, early days.

Rebel Youth headquarters, Tuesday morning, October 23, 1962. Adolfo sat writing at a large conference table when the door opened and four or five comrades entered. Joel Iglesias, who walked with a slight limp, came striding toward him.

“Haven’t you heard the news?” Joel asked with urgency.

“A blockade! What does it mean?”

“It means no ships will be allowed to enter Cuban waters.”

“No ships? But what sorts of ships?”

“No ships, dammit! None!” Joel was dead serious.

“But – but – the Soviet Union cannot let its ships be stopped in mid-water!” Adolfo sputtered. “That would be war!”

“Good! You see?” César said to Joel. “He’s smart. You just have to give him a little time.”

“Let’s meet tonight after I hear from the Party,” Joel said. “Most probably I’ll stay in Havana and you guys will go to the provinces.”

That night, outside the building, they said goodbye to each other.

“See you under the mushroom!” Adolfo’s buddy Carlos Quintela said, going to his car.

“Bullshit! Everyone loves his own skin,” another departing comrade said, putting down Quintela’s nonchalance.

“What the hell! See you under the mushroom,” César said, leaving.

Adolfo climbed into his car. His driver Bebo was at the wheel.

“Yeah. Tomorrow we leave for Santa Clara. If.”

“Good for you!” Bebo said. “In Santa Clara you can see that girl you like.”

Next day in Santa Clara, as danger continued to hang over everyone, Adolfo took charge of the local youth organization to deal with the crisis.

Late in the evening Bebo drove him out of town to an old house with a tiled roof. Adolfo knocked on the door. No one answered.

“Are you sure it’s here?” Adolfo asked his driver.

“Yeah! This is the address.”

“Who is it?” a female voice asked from inside.

Marisa emerged in her militia uniform. The sight of the beautiful 17-year-old gave Adolfo all the encouragement he needed.

“At least Nikita and Kennedy are exchanging letters. But it’s a strange feeling. And I decided to give you a present the next time I saw you.”

He reached in his pocket and brought out a small box, handing it to the girl.

“It’s not a fine ring but it is my mother’s.” Adolfo had reclaimed the ring from Galina when they broke up.

Marisa was astonished. “I had never thought of marrying so soon!”

“Of course,” the girl said haltingly.

“Listen,” he said intently. “Have they made a naval blockade against Cuba or not? Is the possibility of an atomic strike real or not?”

“And here we are,” he said, kissing her passionately.

Sunday, October 28, 1962 and following. Six days after Kennedy’s announcement of a naval blockade, the missile crisis abruptly ended when the Soviets agreed to remove their nuclear weapons from Cuba.

Fidel had no part in the agreement, which he had to learn about from news reports. Quite bitter, he skulked away from the Soviet alliance; for the next six years, until he again accepted Moscow’s embrace, he had no clear bearings in the wider world.

For Emi Rivero and thousands of his fellow inmates, the end of the crisis was a heartbreaking affair because it spelled the death of any chance that Castro might be overthrown by the US.

For Adolfo and his buddies, on the other hand, life began anew. Their outfit had yet another name. The Rebel Youth, which for years had been called the Socialist Youth, now became what it had always wanted to be: the Communist Youth. With gusto the young communists went back to the ordinary pleasures of political destruction.

Adolfo’s buddy César, in addition to holding a place in the youth leadership, headed the Union of Cuban Pioneers, the organization of schoolboys. In Adolfo’s eyes it wasn’t much of a job but César loved it.

That kind of situation was typical of power in communist structures. A typesetter at the regime’s daily newspaper might also be a member of the Party leadership and would have more clout in political matters than the newspaper’s editors. In the same way, César’s humble job with the Union of Pioneers didn’t reflect his bigger influence as a youth cadre.

When the position of youth leader for the Havana district opened up, César put in for the job and the Communist Youth directors gave him their backing.

Surprisingly, however, the Party’s Havana district said no. The order came from the new general secretary for the capital region – Joel Domenech.

Him again! How had he survived the purges? Besides being the toughest of sectarians, Domenech had also been Aníbal’s “man at the side of Fidel.” With Aníbal purged from power and disgraced for his association with “sects,” Aníbal’s man ought to have been a memory. Instead he was bigger than ever.

César and Adolfo did not make the connection because they were too sincere for their own good. When Domenech put forward his own man for the post of youth leader in Havana, César and Adolfo challenged the others to a debate in front of Cuba’s president, Osvaldo Dorticós.

Adolfo, predictably, complained about Domenech’s behavior in the argument over Rolando Cubela. Domenech, acting in character, called Adolfo’s assertion a lie. As the debate quickened, Fidel strutted into the president’s office.

After a few moments Fidel calmed down and said he couldn’t be happier with Adolfo and César. But he was speaking softly to men whom he had just laid waste.

The youth leader post went to Domenech’s man, Isidoro Malmierca. Some time later, at his pleasure, Domenech moved César and Adolfo out of the youth organizations.

The victors had big futures in the hierarchy, while Fidel’s thrashing had given Adolfo and César a clear vision of their destiny: to be rōnin, samurai without employment.

For now were let down gently. Raúl Castro took César for the military academy, while Adolfo received a pair of academic posts: a chair in philosophy at the newly formed Schools of the Party, and a professorship in Marxism at Havana University.

In a letter informing his parents of the changes, Adolfo struck a wistful tone. “One cannot have everything in life, and every road taken brings satisfactions as well as renunciations.”

Not yet out of his twenties, Adolfo had started to sound autumnal.