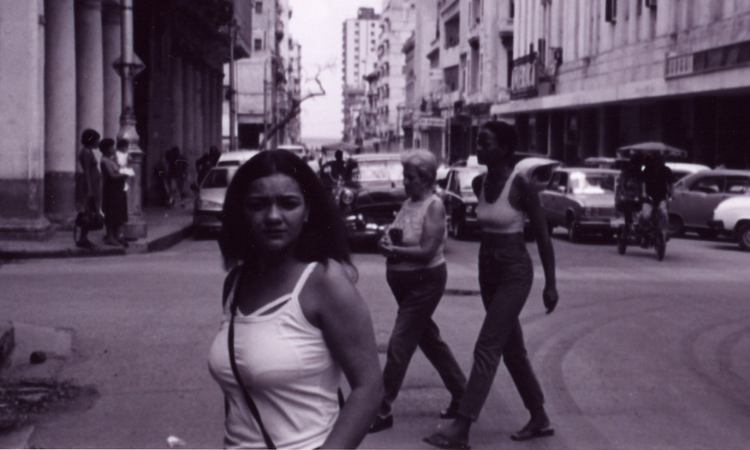 1966-68. In late 1966 Brian Pollitt, son of British communist leader Harry Pollitt, came to Cuba to do a study of rural peasants – a favorite Cuba project of the time for trendy intellectuals on the European Left. In Havana the Schools of the Party set up a sociology team for the study under Adolfo’s direction.

The researchers were looking at peasants in the Escambray. It was a tough subject. The people of that central region had put up a massive armed resistance against Castro; many thousands had had to endure forced relocation by Castro’s armies who were ‘cleaning’ the region of all communities that might aid the rebellion. The campesinos who remained, when scholars came to talk to them, were chary in what they said.

It was nonetheless an interesting, stimulating project. Adolfo’s wife Marisa had agreed to leave her studies and come along. She and Adolfo spent months living on top of a mountain. Each day they wore themselves out in trekking. Marisa didn’t mind the rough conditions at all. She loved the hikes and put on pounds climbing the mountains.

At night, when they turned off the light in their shack, a tremendous noise broke out. What was it? They turned on the light; rats were scurrying all over the room. Marisa couldn’t have cared less. She had fantastic toughness and stamina; the harder things got, the better she became.

Only, something was missing between them. Adolfo felt it even if he couldn’t explain it. Marisa was a good companion, a good comrade; but here they were, two young people on a mountain, with nothing and no one in the way, nothing to keep them from getting close, and they did not get close.

Late in 1967 Adolfo left for a sociology conference in Évian, France. His friend César, seeing him off at the airport, asked enigmatically: “Why don’t you think about staying there?”

César had an uncanny feel for political developments. Adolfo gave it a thought but took no action. Had he changed his plans, he might have spared himself quite a bit of trouble.

Like his brother on the day of his capture, Adolfo stood at a fork in the road – and as with his brother, the road he chose was the hard one.

To Adolfo as to Emi, the hard road would pay back a personal richness that the easy road would not have given him. People of conscience are typically drawn to the more challenging path, and it gives at least one clear advantage: it lets you see precisely where you stand.

Weeks after returning from Europe, I was still processing data from the Escambray study. Such rote-work was completely boring to me, though fortunately Marisa took care of things with her usual efficiency.

On that day late in January we went to have lunch, as always, at the Schools of the Party dining room. After lunch we were engaged in table talk when my close friend Félix de la Uz showed up, looking worried.

“Let’s beat it,” Félix told me. We took off on his motorcycle.

What was happening? Félix was strangely silent.

At last he turned his head and told me: “Your name is included in a report that is going to be published in Granma. You are named as a member of Aníbal Escalante’s faction.”

I felt my face and hands turn cold.

“But I have not seen Aníbal in more than a year!” I cried back at Félix, hardly able to hear my own voice.

The thing had no sense at all. César had come and said to me: “Look, Aníbal just sits around his house all day with nothing to do. Why don’t we drop in?”

Where was the harm? It was a chance to talk to history. If Churchill or De Gaulle were sitting on a porch reading a newspaper, who in the world would not go and speak with him?

At the Schools of the Party building we climbed up to the top-floor office of our boss, Leonel de Soto. The room wasn’t very big but it was carpeted and air-conditioned. Leonel received us with his usual smile.

The Central Committee was in session and had broken for lunch. Leonel, a member, had used the break to return to his office and send Félix for me.

Leonel told us that Raúl Castro had presented a report alleging a new scheme on Aníbal’s part. “They call it a ‘microfaction.’ Your name appears at the very beginning of the report, together with César’s. He is mentioned again but not you.”

I guessed that Leonel, with his last comment, was trying to console me. As a rule, however, one shot to the head is enough.

“What does the report say?” Félix asked Leonel.

“That Aníbal does not agree with anything.”

Félix launched into an explanation of how absurd it was to lump me with Aníbal. He spoke with his usual passion and clarity. Leonel sat listening attentively. But this talk between them was only a gesture of solidarity – of sympathy.

“I told you not to visit Aníbal!” Leonel said to me when Félix had done. “I even gave you a message from Fidel!”

“And I heeded that message!” I answered, exasperated. “Even before you talked to me, Carlos Rafael had mentioned it, and that was enough for me not to visit Aníbal again!”

Carlos Rafael Rodríguez was a 20th-century communist politician who might be called Cuba’s Talleyrand. He served in Batista’s wartime cabinet and went on to serve Castro for nearly 40 years.

“You should never have gone in the first place,” Leonel said. “A lot of people from the old Party are involved in this mess. Aníbal resented the anti-sectarian campaign. And he still has ambitions. He was meeting with people at the Soviet embassy.”

“It’s another purge!” I said bitterly.

“If Fidel were not distrustful, he wouldn’t be alive,” Leonel answered.

Of course! Anyone disagreeing with the report would look like part of the conspiracy. So everyone would agree.

Leonel stood up. “I have to go back,” he said, pressing my shoulder with affection. “Perhaps they won’t publish the report.”

Félix rode me back to the cafeteria, where Marisa was waiting. As we walked, I had to give her the news.

“Perhaps it will not be published,” I concluded.

“Let’s hope so,” she said desolately.

Of course it was published. Headlines blared out the accusations as facts:

How and where the traitors met!

Insidious labors of trickery and proselytizing!

Clandestine circulation of statements against the revolution!

The report went on and on with eye-witness accounts, official commentaries – acres of words running over into the next day’s newspaper, which it also filled.

The day of the first installment I went to have lunch as usual at the Schools of the Party. No one came to sit with me. Only one man stopped and said: “You are radioactive.”

The image struck home. I decided not to return there so as to save my colleagues from further contamination.

The day of the second installment, Félix invited me to the Centro Vasco restaurant with Javier de Varona and Ezequiel. Those were friends; they were courting professional failure and public censure of the most putrid kind.

Javier raised a glass. “To Siberia! They say it has a very healthy climate.”

1968-69. At the end of May 1968 Adolfo wrote to his parents about his plight and that of his friends, thrown out of their jobs for supposed ideological offenses.

“We continue without work even though they keep paying us. I have no idea what I’ll be able to do. I’ve run almost half the course of my life and still haven’t managed to cast anchor.

“My only security is in the principles that have directed my life and in the affections of a close few. It’s very curious for me, nonetheless, that certain general experiences have a wide range of validity. Among my friends, for example, certain of Dad’s sayings which I constantly use have become very popular; also, to be sure, some of Emi’s.

“I still think I was right in the fundamental areas. But things were infinitely more complicated than I had thought.”

Seven months later, at the beginning of 1969, Adolfo told his parents: “With the end of the year, the long process of my discussions with the Party also came to a close. Actually I took part in just two meetings, one in June and one in October, the second one only to receive the Party’s statement, which took five minutes.

“I was told that I had ‘serious differences with the Revolution,’ that the Party was ‘breaking relations’ with me and that the Labor Ministry would determine my work situation . . . I am only permitted to work as a field hand or in a factory. Among possible options which the comrades at the Ministry discussed very gently with me, we came to the conclusion that ‘electrician’s assistant’ would be best.

“So this year will find me changed into a proletarian – one of those whom I have dedicated my life to defending.”