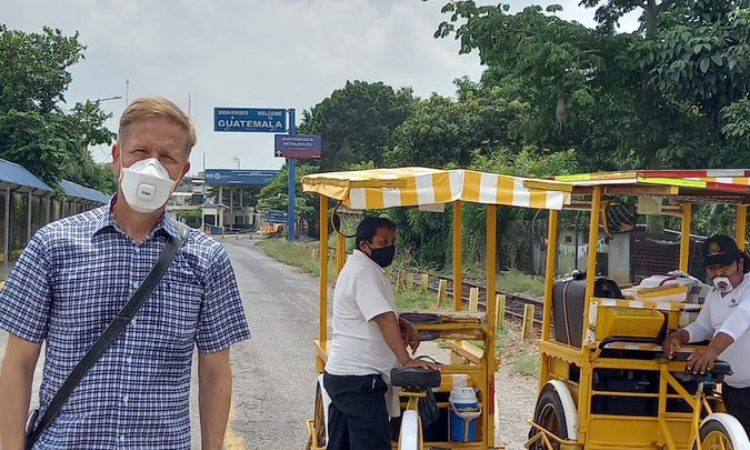 In early September 2020, Hans Magnusson made headlines as he entered Guatemala through its northern border on a pedicab. The international airport was closed due to the COVID-19 pandemic, so he had to cross the bridge connecting Guatemala with Mexico. He arrived to replace Anders Kompass as the new Swedish ambassador.

Sweden is an important powerbroker in Guatemala and was one of the main backers of the defunct International Commission against Impunity in Guatemala (CICIG), which was expelled from the country over alleged illegalities and corruption.

The Swedish government appointed Magnusson as ambassador to Guatemala on April 23. Previously, he held several managerial positions at the Swedish International Development Cooperation Agency (SIDA), a government body with poverty-relief programs across the world, including Guatemala.

Magnusson also served as an aid advisor to the Swedish embassy in Guatemala and the regional director for Central America of the Christian development organization Diakonia. He has kept a low profile and has not been involved in major controversies during his career.

What was his predecessor’s performance during his tenure?

Anders Kompass was the Swedish ambassador to Guatemala from late 2017 to mid-2020. He left the country on June 16 on a humanitarian charter flight.

Kompass came to Guatemala after working for over two decades at the United Nations, from which he resigned in 2016 over a scandal. Kompass had leaked information to the press about the cover-up of human-rights abuses by UN missions in Africa.

During his tenure as ambassador to Guatemala, Kompass supported the CICIG and its commissioner Iván Velásquez. He clashed with former Guatemalan President Jimmy Morales, who was working against the political establishment to end the CICIG’s mandate in Guatemala. The CICIG had incurred in illegalities as denounced by civil-society organizations. In May 2018, Morales decided to expel Kompass over his alleged meddling in internal Guatemalan affairs.

Nevertheless, the country’s Constitutional Court ruled against the president’s expulsion order and kept Kompass in his post. Civil-society organizations claimed this ruling violated the separation of powers because the Constitution grants exclusive powers to the executive branch regarding foreign affairs. The CICIG, however, ended up leaving Guatemala in September 2019.

How are the relations between Sweden and Guatemala?

Diplomatic relations between Sweden and Guatemala harken back to the 1930s, but cooperation intensified after the end of Guatemala’s internal armed conflict in 1996. Swedish aid has focused on the implementation of the peace agreements, transitional justice, anti-corruption efforts, and economic support for small-scale farmers and indigenous peoples.

Sweden has donated US$115 million over the past five years, and it was the second-largest funder of the CICIG while it was operational. Between 2007 and 2018, the Swedish government contributed over $35 million to the CICIG, surpassed only by the United States.

Diplomatic relations between Guatemala and Sweden became strained in 2018 when Morales announced he would not renew CICIG’s mandate and asked Sweden to replace Kompass as ambassador. In 2019, the Morales administration decided to close Guatemala’s embassy in Sweden and dismissed the bilateral relationship as “almost nonexistent.”

The current President Alejandro Giammattei, however, reversed Morales’s action when he took office in early 2020. He apologized to the Swedish government and began arrangements to reopen Guatemala’s embassy in Stockholm.

What has he said about his approach to Guatemala?

In his first public address to the Guatemalan people, Magnusson highlighted his country’s commitment to fighting climate change, to a “feminist” foreign policy, and to strengthening democratic institutions. It remains to be seen whether the Swedish embassy will focus on multilateral cooperation projects or try to keep steering Guatemalan politics as his predecessor did.