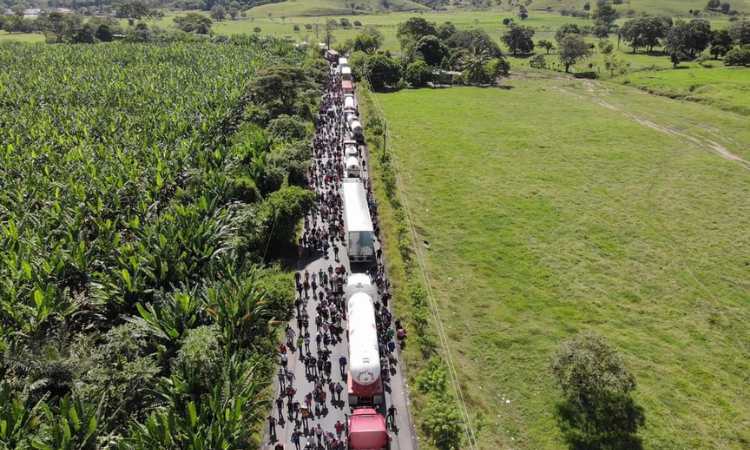 Men made up the majority of the caravan, but entire families also joined the crusade. (Orlin J. Martínez)

On September 30, a new migrant caravan departed from San Pedro Sula, Honduras, en route to the United States through Guatemala and Mexico. This is the first caravan since the COVID-19 pandemic hit Central America in March 2020, forcing entire economies and borders to shut down.

The migrants, however, did not reach their destination. To prevent a new health crisis and abide by the asylum agreement with the United States, the Guatemalan government stopped and disbanded the caravan. More than half of its members have returned home.

How was the latest caravan organized and who constituted it?

Organizers used Facebook and WhatsApp to schedule their departure early in the morning on October 1. Nevertheless, the caravan began its march toward Guatemala the night before.

A hotly contested topic is whether these migrant caravans receive funding from outside sources. In her research, Guadalupe Correa-Cabrera, an associate professor at George Mason University, did identify external influence in previous waves. “They are not just organic mobilizations,” she told the digital Latin American media outlet Infobae.

She argued all the caravans she has examined share a common origin: real conditions such as poverty and insecurity push migrants to explore all means to reach the United States, and external actors provide the means for the massive mobilization.

On October 4, Guatemalan President Alejandro Giammattei said around 3,500 people—mostly Hondurans—had joined the caravan and that officials had managed to repatriate 3,384 of them.

The Honduran government released different figures, however. Deputy Foreign Minister Nelly Jerez reported around 1,250 people had left the country with the caravan, and 1,043 of them had returned.

Men made up the majority of the caravan, but entire families also joined the crusade. According to Jerez, they used children as “human passports” in the hopes of receiving special treatment from migration authorities.

Giammattei also claimed the caravan had placed women and seniors in front as human shields to undermine security forces. He requested that caravan organizers stop putting vulnerable individuals at risk.

Why did Guatemala stop the caravan?

Giammattei, who tested positive for COVID-19 in late September, announced Guatemala was working together with Honduras to halt illegal attempts to cross the countries’ borders. He argued his administration’s foremost duty during the health crisis was to protect Guatemalans from any threats.

Although the Guatemalan government respects the right to migration, Giammattei said the caravan got into the country illegally and violently, disregarding health measures.

On September 18, the Guatemalan government reopened land, sea, and air borders, but placed new biosecurity measures in place. Those entering the country had to provide a recent negative COVID-19 test.

Most caravan members did not meet that requirement, arguing they were only passing through Guatemala to reach Mexico and then the United States. Due to the huge influx of migrants ignoring health measures, Giammattei declared a state of emergency in the Guatemalan regions of Izabal, Petén, Zacapa, Chiquimula, Jutiapa, and El Progreso.

What is the Guatemalan government’s legal basis for doing so?

Guatemalan security institutions reported that staff from the United Nations High Commissioner for Refugees (UNHCR) were pressuring to allow the caravan to continue their way to Mexico. Other international organizations also condemned Guatemala’s enforcement of the law.

The Giammattei administration cited the country’s Constitution. It provides that security trumps the full enjoyment of some rights, including migration and free movement across the country.

The caravan also violated Guatemala’s Migration Law by entering the country without submitting to mandatory controls and without complying with COVID-19 containment provisions. As violence broke out when the crowd entered Guatemala illegally, one caravan member died.

In addition to national legislation, the asylum agreement that Guatemala signed with the United States in 2019 compels the former to take an active role in reducing illegal migration toward the United States.

How did the international community react to Guatemala’s response?

The UN’s refugee agency criticized how Guatemala stopped the caravan. Arguing that the trip amid a pandemic underscores the desperate need of migrants, Felipe González, the UN special rapporteur on migrants’ human rights, labeled the government response “repressive.”

In contrast, the United States and Mexico, who had stopped the previous caravan, congratulated Giammattei on his response. These countries have joined efforts to reduce illegal migration through a similar asylum agreement; for them, Guatemala’s action shows cooperation is effective at containing the flow of illegal migrants and drugs.

This time, Mexico stood ready to detain the remaining caravan members who had escaped Guatemalan controls. On October 2, the Mexican government deployed 300 security officers to its southern border. Even though Guatemala had already done most of the work, they captured 235 people on their way to the United States.