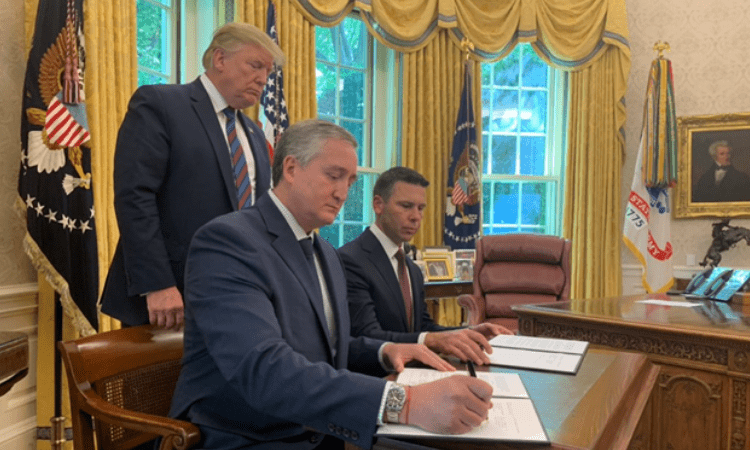 President Donald Trump reached an asylum agreement with Guatemala’s outgoing President Jimmy Morales on July 26. Although the winner of the Aug. 11 runoff, President-elect Alejandro Giammattei, has not supported the agreement, the responsibility of governing will change that when he takes office in January.

The agreement has provoked opposition from Democrats in the United States and leftists in Guatemala, but for different reasons. As part of their 2020 election strategy, Democrats want to keep illegitimate asylum seekers coming to the U.S. border and depict Mr. Trump as an anti-immigrant racist housing them in squalor.

With no answers to Mr. Trump’s many successes, Democrats only have demonization.

This became clear when Democrats viciously attacked Sen. Lindsey Graham, South Carolina Republican, after the Senate Judiciary Committee he chairs advanced legislation to limit asylum procedures. The current system promotes false asylum claims, since any alien alleging persecution has a legal claim to a hearing before a judge.

The wait time can be several years. Those with children can only be held for 20 days and are released pending the hearing. This is an open door to the United States for migrants who do not qualify for asylum.

Asylum is for protection from persecution. Almost all the migrants claiming asylum are seeking work, not fleeing persecution. Only crass partisan politics would permit so many aliens to enter the United States under false pretenses.

Democrats, however, exploit images of the migrants as part of their defamation of Mr. Trump. They care not for security issues or the suffering of those they push to migrate to the United States on what Democrats know is a perilous journey.

Mr. Trump has pursued the Guatemala agreement to circumvent shameful Democratic obstructionism. The agreement means the Trump administration can deny an asylum hearing to any alien who has passed through Guatemala.

The international left and Democrats work together. There is nothing more important to them than defeating Mr. Trump in 2020.

Socialists in Guatemala and in the United States, including their media allies, teamed up but failed to defeat Mr. Trump’s agreement with Guatemala. House Speaker Nancy Pelosi visited Guatemala last Thursday, just three days before the election, and met only with socialists opposed to the agreement. Her comrades wanted Guatemalans to interpret the meetings as U.S. government support for the socialist candidate.

Guatemalans were not fooled. They resoundingly voted against Sandra Torres in the runoff.

The main socialist talking point — a red herring — has been that Guatemala cannot host so many migrants, but the nation will face no such burden. The economic migrants will not apply for asylum in Guatemala, since they are heading to America for work. There is no appealing work available in Guatemala.

Guatemala’s Constitutional Court (CC) — the nation’s last word on judicial matters — could void the deal by declaring it unconstitutional. The resulting turmoil would reveal Obama-Biden administration intervention in 2016 to assure control of the court for their socialist takeover of Guatemala.

The Obama-Biden administration changed the policy of the previous 10 administrations and embraced the Castro regime, including establishing an embassy in Havana. They also supported the remnants of guerrilla groups across Latin America created and funded by Castro’s America Department. The Cubans continue a Marxist agenda in the region; see Venezuela.

To get the agreement with Mr. Morales, Mr. Trump threatened tariffs and travel restrictions on Guatemalans. Most importantly, he threatened a fee on the annual $9 billion remittances that comprise 12 percent of Guatemala’s GDP. No Guatemalan president who depends on the support of his people could oppose a harmless agreement and then withstand Mr. Trump’s retaliation.

Similarly, the new president will have no choice but to support the agreement.

The benefit for Guatemala is the side agreement of a guest-worker program: H-2A visas. Guatemalans will be able to work legally in the United States and return home. There are improvements Mr. Giammattei can make to this program to alleviate poverty and help development.

However, Mr. Giammattei can get what Mr. Morales has not. He can propose changing the Obama-Biden policy to one of support for enforcing the law, to the benefit of Mr. Trump and the United States. Working together for mutual benefit, Mr. Giammattei and Mr. Trump can develop Guatemala while significantly reducing the flow of illegal migrants and drugs.

Working together would build upon the asylum agreement, which is likely to be confirmed. The agreement is also set to remove a Democrat issue — an open door for false asylum — that harms the United States. The removal would help Mr. Trump’s re-election, which is also key for a stable Guatemala.

As vice president, Joe Biden came to Guatemala three times to support radical collectivists, and Mrs. Pelosi was in the country last week. Their agenda has been to inflame chaos, while Mr. Trump works to bring order. Guatemala needs Mr. Trump to help finally put an end to the socialists originally forced upon the country by Fidel Castro, and then, Mr. Obama and Mr. Biden.

This article first appeared in the Washington Times.