The ELN Guerrilla’s Expansion in Colombia, Venezuela
Skip to content 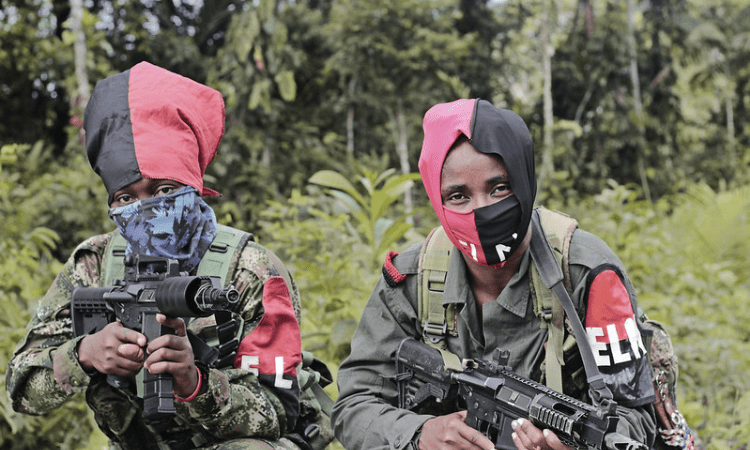 Since its inception, the ELN’s ideological and religious origins set the guerrilla’s scope beyond national borders. (Brasil de Fato)

In recent months, guerrilla activity on the Colombian border with Venezuela has ramped up, as the dominion of the National Liberation Army (ELN) has expanded in both countries. On September 12, in Arauquita—a Colombian border city—five military officers were killed in an ELN attack.

The ELN is the largest remaining guerrilla group in Colombia and all Latin America. The Revolutionary Armed Forces of Colombia (FARC), historically the region’s main Marxist rebels, signed a deal with the Colombian government in 2017 to depose arms and enter politics. The ELN has since moved into former FARC areas and continued to expand north into Venezuela.

Although the Colombian government also sought peace with the ELN, President Iván Duque suspended negotiations when he took office in 2018. Duque had demanded ELN hostages be freed, but the rebels kept at their kidnapping and terrorism. A January 2019 car bombing of the national police academy in Bogotá that left 20 dead was the straw that broke the camel’s back and buried peace efforts.

The ELN appeared on January 7, 1965, when a group of religious and student activists inspired by the Cuban revolution overran a tiny village in the central Santander region.

Its founding members, many of whom received training in Cuba, initially fused Marxist-Leninist ideology with liberation theology, a branch of Catholicism popular in South America at the time. From the 1970s to 1998, the ELN leader was Manuel Pérez, a Spanish priest. Over the decades, the ELN has gradually morphed into a less ideological criminal organization allied to drug cartels.

The ELN structure mimics that of an army with a Central Command (COCE) and eight battle units that gather around 3,000 fighters in total. Four commanders currently constitute the COCE:

The ELN has an uneasy relationship with smaller, dissident FARC factions that did not surrender their arms. Both groups fight for control of the main drug-trafficking corridors in Colombia. The ELN has taken the upper hand and expanded into Venezuela thanks to ties with the Nicolás Maduro regime, growing its drug-trafficking and illicit-mining operations.

How does the ELN finance its operations?

The ELN employs a mix of illicit methods to raise money.

A 2017 intelligence operation between Colombian and US officials found that an ELN unit was controlling poppy cultivation and trade in the southern part of the country. It had 204 people under its control and about 300 hectares of poppy crops used to produce heroin.

In a similar vein, the ELN trafficks drugs between Colombia and Venezuela. They extort coca-leaf growers and run labs to produce derivatives. They also control drug smugglers and trafficking routes to the north.

In Colombia, the ELN extorts owners of illegal mines, taking a cut of their profits or charging fees to allow access for machinery. In Venezuela, however, the ELN itself is actively engaged in illegal mining, running the exploitation of gold, diamond, and coltan in alleged alliance with Venezuelan government officials.

Since the ELN has taken control over most of the border, the rebels are extorting travelers and migrants who seek to cross it. The ELN also imposes “fines” on roads inside their territory. For instance, they forbid motorcycle riders from using helmets so they can identify passersby. The ELN also extorts other criminal groups engaged in human trafficking and smuggling.

Before focusing on the drug business, the ELN used to rely heavily on kidnappings to raise money from ransoms. According to Colombian newspaper El Tiempo, there were 6,789 kidnapping victims from 1978 to 2015.

Currently, in the border areas of Arauca and Apure, the ELN kidnaps people for forced labor or to take over their land for new crops. When civilians do not pay up extortion fees, the ELN holds them hostage for ransom. Those who disappear without a trace return home after months spent in guerrilla farms and camps.

What areas in Colombia are under ELN control?

As of February 2020, the Development and Peace Studies Institute identified ELN presence in 207 municipalities across 23 of the country’s 32 departments or regions. The ELN has had a constant presence in 136 municipalities and has been expanding or crossing into the remaining 71.

Since the FARC’s demobilization in 2018, the ELN has increased its presence in 16 municipalities and has kept expanding. It is mainly consolidating its war front in the northern departments Arauca, Boyacá, Casanare, and Magdalena Medio.

In January 2020, a study conducted by the Ideas for Peace foundation found that the ELN was controlling seven of the 10 municipalities with the largest coca-leaf crops: Taraza (Antioquia), Tambo (Cauca), Barbacoas, El Charco (Nariño), El Tarra, Sardinata, and Tibú (North Santander).

Where and how is the ELN expanding outside Colombia?

Since its inception, the ELN’s ideological and religious origins set the guerrilla’s scope beyond national borders. As it did with several guerrilla groups, Cuba’s Fidel Castro regime aided the ELN by providing ideological, military, and political training.

At present, although its ideological components have diminished, the ELN’s expansion outside Colombia continues. This strategy allows the ELN to have the status of a transnational armed group rather than common criminals.

Moreover, as the ELN conquers more territory, its dominion over drug-trafficking and illegal mining increases along with profits and manpower. In the corrupt and impoverished Venezuela, the ELN has found a golden opportunity to expand unabated.

The latest available data estimates the ELN has a presence in half of Venezuela. Rebels are rapidly taking over cities and becoming a parallel government.