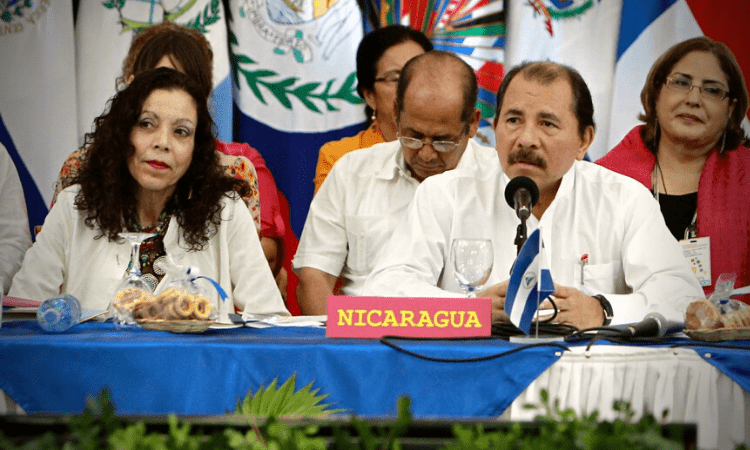 The couple dictatorship fully controls all formal powers: the executive, the legislative, the judicial, and the electoral. (Flickr)

When you read the headlines on November 8, they will say Daniel Ortega and his wife Rosario Murillo, respectively, are again president and vice president of Nicaragua. Ortega will begin his fourth consecutive term. As leaders of the Sandinista National Liberation Front (FSLN), they will be poised to rule for another six years. Be warned, however. While six years sounds like a constitutional limit, it is no more than a suggestion.

The Nicaraguan constitution once prohibited reelection for presidents and prohibited relatives to occupy the vice presidency. It is not far-fetched to think that the six-year barrier will soon be lifted. Hugo Chávez in Venezuela used the same tactics in his touted “twenty-first-century socialism.”

The presidential maneuver to install a spouse as vice-president did not fly in Africa. When revolutionary dictator Robert Mugabe tried it in Zimbabwe, the party he led stopped him. Mugabe was well entrenched in power for 37 years, but the Zimbabwe African National Union-Patriotic Front (ZANU-PF) bucked at the move and pushed him out.

It is difficult to know whether the Canadian, US, and European socialists had more admiration for ZANU-PF in Zimbabwe or the FSLN in Nicaragua. What is clear now is that between the liberating revolutionary movements that liberals lionized in the 1980s, the Sandinistas are by far more servile to dictatorship than their Zimbabwean counterparts. If servility to slithering tyranny became an Olympic sport, the Sandinista party would host the games and win the gold medal effortlessly.

Ortega and Murillo are a two-headed dictator. Leading up to the 2006 election, they purged and transformed the Sandinista party into their family’s instrument. As a couple dictatorship, they have set a new standard for banana republics. What African dictators might do in the future to regain their reputed supremacy in the politically ridiculous is anyone’s guess.

One might grant that the Ortega-Murillo are yet to top African dictators in brutal violence. While they have not reached the levels of a Charles Taylor, Jean-Bédel Bokassa, or Idi Amin, the Sandinistas have shown they wish to be contenders. They have embraced the killing spirit of previous local strongmen who turned their machetes against the citizenry.

During the 2018 spontaneous uprising against their rule, Ortega-Murillo did not hesitate to unleash the repressive Sandinista army, police, and rabid hounds of their own paramilitary partisans. Together, these murdered over 300 citizens, many of whom were children and innocent bystanders, and they persecuted, imprisoned, and chased several thousand others into exile.

It was not enough. Fearful of more protests, the Sandinistas enacted legislation under the pretense of national security that would make any 1950s Latin American military dictator proud. Under Law 1055, for example, the bicephalous Sandinista dictator gave itself broad powers to derogate competing political parties and to prosecute anyone for treason.

The couple dictatorship fully controls all formal powers: the executive, the legislative, the judicial, and the electoral. It controls all mainstream media and has shut down all independent voices. It enjoys a full monopoly of violence, and still, they are pathologically troubled by the prospect of losing.

Ahead of the November election this year, they brazenly applied such laws to round up any potential candidate suspected of being a threat. They have also imprisoned alternative media journalists and businesspeople who refuse to bow before them. A child can see that if the election were a baseball game, the Sandinistas are not allowing the other teams to have bats and gloves and have expelled from the stadium their managers, pitchers, and catchers.

The only independent institution in the country not fully under the Sandinista boot is the Roman Catholic Church, which will likely not be allowed to pray for the other teams either. Sandinista thugs and police often block entry for the faithful at select churches in which people might hear frightful messages of hope and liberty. Such restrictions might develop into more in the weeks ahead. In her daily radio rants, Vice President Murillo has been regularly accusing the church of advancing foreign interests and promoting sedition against the state.

No one, therefore, needs a crystal ball to determine with certainty who will win the upcoming election. None of the other parties and candidates allowed to be on the ballots has any real chance to defeat the couple dictatorship. No Nicaraguan casting a ballot on November 7 will be under any delusion that he can change the predetermined outcome. The two-headed beast has ensured there will be no surprises.

However the peaceful people of Nicaragua react—and whatever the response among former Sandinista allies’ and current supporters in Canada, the United States, and Europe—Ortega-Murillo’s dread of losing power is a new measure for pathetic political farce. Call it twenty-first-century socialism.