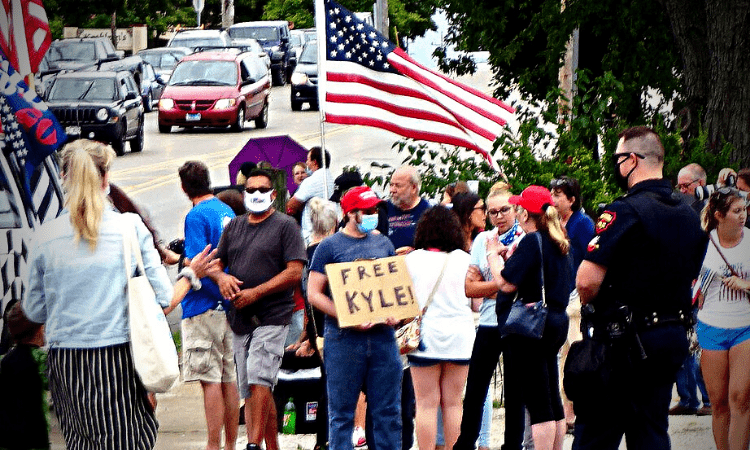 The Kyle Rittenhouse trial worked as the country’s founders foresaw. The defense, protected by due process, and a jury of 12 ordinary citizens produced a not-guilty verdict. Rittenhouse’s Creator-granted rights remained intact despite tremendous pressure and intimidation from those dominating the federal government who intend to steal our liberty and impose tyranny on us.

A reporter asked Joe Biden if he stood by his previous comments equating Rittenhouse to white supremacy. Biden replied, “the jury system works, and we have to abide by it.”

Shortly after, the White House issued another Biden statement: “While the verdict in Kenosha will leave many Americans feeling angry and concerned, myself included, we must acknowledge that the jury has spoken.” Biden’s handlers attempted to portray him as reasonable and consistent with the prior statement while simultaneously undermining the verdict and continuing the white-supremacy narrative.

The same happened when Biden declared as “trash” and “nonsense” reports that his regime would pay separated adult and minor illegal immigrants $450,000. That was Biden reacting spontaneously. A White House advisor two days later said the Justice Department would determine the amount of separation compensation.

Biden is clearly unaware and not in charge of his regime. His managers are systematically and purposely destroying the country domestically and internationally without taking responsibility.

If Biden were a real American leader, he would have said, prior to the Rittenhouse trial, all accused persons enjoy the presumption of innocence and a fair trial.

Instead, Biden stood by while his legacy media partners demonized Rittenhouse, including with false information. They made the trial a confrontation between supposed anti-racism protesters and white supremacists. This is part of a classic Marxist conquest strategy of division, with race as the core tool of division.

The many commentators who have expressed amazement that race should be an issue in the trial since the accused and the people he shot were all white miss the larger context. Marxists promote conflict to create chaos they think will result in public acceptance of a strong central government to restore order.

During the 2020 riots in many cities, Biden’s campaign promoted him as a return to normal. I wrote in these pages: “A Biden presidency, driven by identity politics, would foment chaos in US cities. He would exacerbate drug trafficking and illegal migration from Latin America.”

Barack Obama promoted the false narrative of systemic racism during his tenure as president, and he continues to do so. Black Lives Matter founder Patrisse Cullors in a 2015 video said “We are trained Marxists.” Obama had BLM activists at the White House and said “They are much better organizers than I was when I was their age … I am confident that they are going to take America to new heights.”

We have seen the lies and distortions produced for the false narrative of systemic racism many times, such as with the Michael Brown and Breonna Taylor cases. The Rittenhouse case is a continuation.

Proponents of the race angle claim Rittenhouse went to Kenosha to confront legitimate protestors of the racist police shooting of Jacob Blake, a black man. Obama’s legacy media partners omitted facts such as that the police were obligated to arrest Blake because of an outstanding warrant.

The mother of Blake’s children had called the police, and they discovered the warrant. An officer shot Blake when he resisted arrest. The Kenosha prosecutor and the Biden Justice Department both declined to prosecute the officer.

Legacy media have coalesced with oligarchs and Democrats—now dominated by Marxists—to impose their shared agenda. On the back of promoting identity politics and conflict, this coalition clamors for centralized, arbitrary power to protect victim groups.

An FBI whistleblower reports the Biden Justice Department used counterterror tools against parents trying to protect their children from Marxist indoctrination. That and Biden’s lawfare in Guatemala indicate the regime would have preferred to prosecute the officer who shot Blake. They did not because our jury system, as we saw on Friday, still offers some protection against an immoral government.

Our Constitution is based on Creator-granted individual rights that can only be abridged through due process of law. For the Marxists and their useful-idiot followers, as Lenin called them, Kyle Rittenhouse has no rights. The Marxist collective good demands he be sacrificed regardless of facts or law.

The lesson of the Rittenhouse ordeal to each one of us is our only protection against a tyrannical government is the system our wise founders bequeathed us. Let us protect it and thereby ourselves.