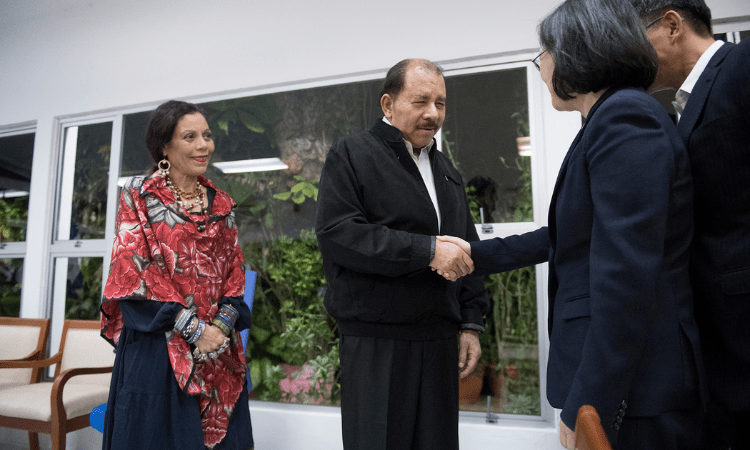 The regime of Daniel Ortega and his Vice President Rosario Murillo broke off official ties with Taiwan in December 2021. (Flickr)

Nearly 15,000 kilometers separate Taipei and Managua. This vast distance is akin to the distance between North America’s most northern point on the Arctic Ocean and Hornos Island at the most southern tip of the Americas. It is almost half the circumference of the planet.

Yet, for the better part of six decades—since the early 1960s—such significant physical distance was bridged by combinations of official and unofficial friendships between Taiwan and Nicaragua. That was until the pariah Sandinista regime of Daniel Ortega and his Vice President Rosario Murillo broke off official ties with Taiwan in December (2021).

Despite their own authoritarian tendencies and preference for Chinese-style totalitarianism, Ortega-Murillo carried on official relations with Taipei for a decade and a half. After another round of sham elections last November, however, Ortega-Murillo broke it off.

Taipei may have quietly commented on the increasingly thuggish Ortega-Murillo developments. The dictator couple held elections last November after abducting and imprisoning all potential opponents. They established the least respectable voting process in the hemisphere. They held an absurd electoral competition without competitors or neutral observers, which the Sandinistas naturally won.

Less than two weeks later, Ortega-Murillo unceremoniously evicted Taiwan from Nicaragua and announced their newly found allegiance to “the existence of one China.” In the whimsical way of tinpot dictatorships, Ortega-Murillo broke dozens of international law protocols and illegally seized Taipei’s property to present as an offering to their rekindled Beijing friends. Now more thuggish than ever, the Sandinistas ran into the arms of equally tyrannical Beijing.

The move harks back to the time before the Sandinistas became the lepers of the socialist world. When Ortega first became president of Nicaragua in the 1980s, he cut off relations with Taipei and declared favor to Beijing. That lasted five years. Violeta Chamorro later defeated Ortega and restored her country’s friendship with the small island country in 1990.

In Ortega’s aggregate reign of two decades, he has shunned Beijing three times longer than he has Taipei. Although Ortega-Murillo will not last in power much longer, the diplomatic reversal does change or reinforce some important things.

First, the people of Nicaragua have been deprived of their formal friendship with Taiwan, and reasonable Nicaraguans are embarrassed about the mistreatment of the Taiwanese. The same reasonable Nicaraguans already endure the existential burden and greater shame of knowing they are ruled by a clownish, power-lusting couple with radical delusions of global grandeur. Washington’s reaction can take cold comfort in being correct about popular sovereignty and legitimacy when it declared that “Without the mandate that comes with a free and fair election, Ortega’s actions cannot reflect the will of the Nicaraguan people.”

Second, the people of Taiwan are undoubtedly grieved, but they have seen the face of tyranny up close. They are acquainted with the vulgarity of those who have no guide to their actions other than power. Notwithstanding the loss of a political ally in a world wherein Beijing aggressively seeks to isolate them, the loss of fake allies such as Ortega-Murillo is a moral win for Taiwan.

Third, Beijing’s campaign to isolate Taipei claims one more victory. Beijing welcomes one more formal ally to its ranks, leaving one less for Taipei. In less than a decade, Beijing has successfully removed one-third of Taiwan’s diplomatic allies. As far as Managua is concerned, Beijing’s win may be short-lived, given the short expected shelf-life for Ortega-Murillo.

Finally, all freedom-loving peoples everywhere lose from the Taiwan setback, not just those in Taiwan and Nicaragua. However, the greatest strategic loser is the United States of America. With the severing of relations between Nicaragua and Taiwan, the United States loses political ground in the Caribbean basin, a key strategic region in the Western hemisphere.

The People’s Republic of China marched right through the front hemispheric door and isolated a key US ally in the eastern Pacific region. The boost for the Sandinistas is a boost for Beijing. It is a boost for US enemies in the Caribbean region and the Far East. While Washington is not responsible for Taipei’s diplomatic fortunes, Managua is the seventh ally in as many years that Beijing has peeled off of Taiwan, and it is all happening right under Washington’s nose.

Despite the vast distance separating them, a few years of diplomatic estrangement will not terminally damage the friendships between the freedom-loving peoples of Nicaragua and Taiwan. However short-lived this Chinese Communist Party advancement in Nicaragua may be, it is not in the best interests of free countries in the Americas.

The State Department needs to figure out a strategy to keep Beijing at bay in this hemisphere. The professorial response reciting popular sovereignty theory will simply not do.