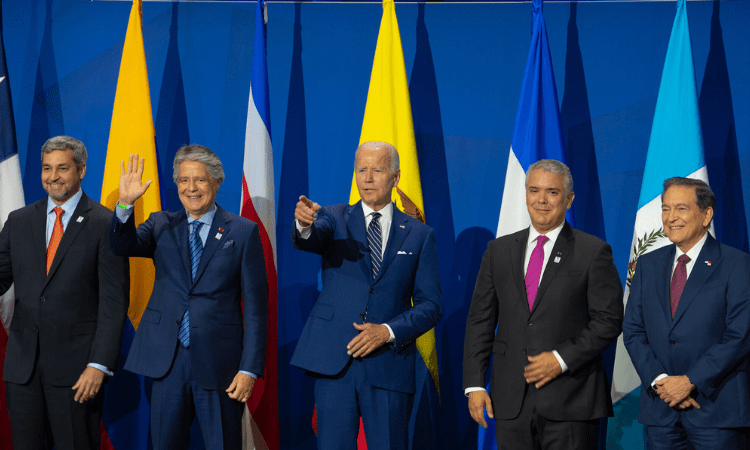 US President Joe Biden opened the long-awaited Summit of the Americas on June 8, 2022, announcing the Americas Partnership for Economic Prosperity. This pitiful plan is loaded with progressive buzzwords, but it is incapable of generating meaningful change.

The objective—not that it will be achieved—is the restoration of US leadership to nullify Chinese influence on the continent. The Biden administration has described the plan as a novel and ambitious economic agenda. In reality, it is a list of ways to funnel ideologically approved cronyism into Latin America.

Rather than creating new trade agreements, the Biden administration expects to manage new investments, including private capital. The plan does not state how much capital is anticipated, but the Northern Triangle appears to be the primary investment destination.

The plan includes a more fluid labor force to aid supply chains, decarbonization from so-called clean-energy jobs, and “inclusive” trade. The partnership, in keeping with progressive rhetoric, seeks “bottom-up” and “middle-out” growth and targets the working poor and middle class. If one reads between the lines, there are tighter regulations on the horizon for labor, the environment, and production.

The Biden administration’s other stated motivation for the plan is the amelioration of soaring illegal migration to the United States. However, during the very week of the summit, a new migrant caravan made its way to the US southern border, defying the Summit of the Americas and US immigration law.

This is the second time the Summit of the Americas has taken place in the United States. Former US President Bill Clinton hosted the first summit in Miami in 1994. Participant countries drafted an ambitious plan to create the largest free-trade zone in the world: the Free Trade Area of the Americas.

In 2005, during the fourth Summit of the Americas, country members planned to kickstart the project. However, Latin American countries succumbed to twenty-first-century socialism. With the emergence of anti-US Chavismo, the countries shelved the agreement.

Since then, US influence in the region has waned. US presidents—from George Bush to Biden—have shown a lack of interest in further economic cooperation with Latin America. Meanwhile, China—despite being on the other side of the world—has secured its presence.

The Biden administration expected to discuss immigration during the summit. He ended up talking to himself, since the presidents of the countries that send the most illegal migrants did not attend, nor did Mexican President Andrés Manuel López Obrador.

Uruguayan President Luis Lacalle Pou—who did not attend the summit due to a positive COVID-19 test—criticized the US approach to the region: “[US leaders] do not have a clear understanding of Latin America. They think the same needs and issues impact the region from Mexico to Patagonia.”

Announcing supposedly ambitious plans for the region is nothing new for Washington. In 2021, during the COP26 climate summit, the United States presented a similar development plan—dubbed Build Back Better World. Nothing has come of it.

The Americas Partnership for Economic Prosperity likely has a similar fate. Although heavy on feel-good intentions, the plan lacks specific actions, participants, and beneficiaries.

The Biden administration is proposing to channel millions of taxpayer dollars and private capital to Latin America without clear coordination and accountability—as though just sending money is a magic wand. During the summit’s opening ceremony, Biden voiced woke arguments: “We must invest to make sure that our trade relations are sustainable and responsible in the creation of more resilient, safer, and sustainable supply chains.”

A key aspect of the partnership is the modernization of the Inter-American Development Bank (IADB). However, the statement did not provide details on how to reform the poster child for graft and sugar-coated parasitism.

According to White House officials, the plan includes zero trade agreements, tariff reductions, or non-tariff barrier removals. This raises doubts about the plan’s substance. The United States does not have trade agreements with many countries in the region, such as Argentina, Bolivia, and Ecuador. Although the Northern Triangle countries—Guatemala, Honduras, and El Salvador—do have ongoing treaties with the United States, their political agendas differ.

The Biden administration is willing to impose investment under woke conditions on countries that have publicly confronted it by not attending the summit. Moreover, US officials are attempting to achieve economic prosperity by focusing on environmentalism and woke social engineering rather than markets.

The economic lockdowns, the Russia-Ukraine war, and inflation have hit hard in 2022. Without free trade, there is no way to make supply chains “more resilient, transparent, and free of exploitative working conditions,” as Biden has proposed.

Paradoxically, the plan’s failure points to closer ties between China and the region. This failure will open the door and heighten China’s ability to forge new commercial and investment relationships. According to a Reuters investigation, China’s trade advantage over the United States in many Latin American nations has increased under Biden.

Despite the empty promises of revived Washington leadership, China continues to expand its dominance in Latin America. This is mostly due to US inaction. “As long as China is ready to put the money on the table, it seems like we are fighting an already lost battle,” a US official told Reuters anonymously.