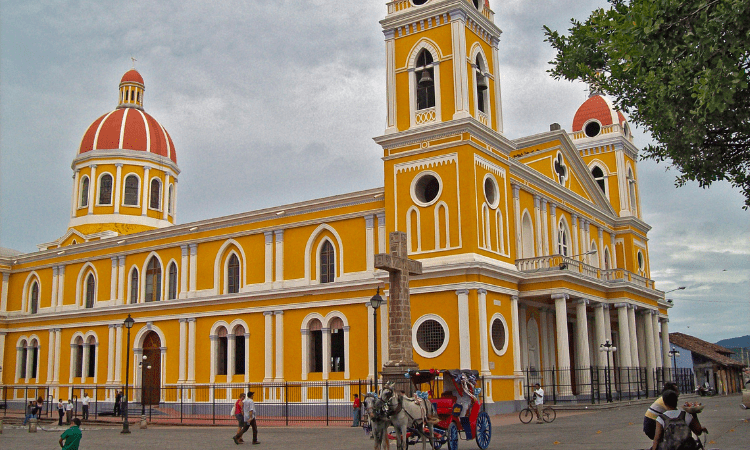 Having crushed or silenced all civic dissent, the Roman Catholic Church is now the focal point of attack. (Wikimedia)

Not content with commanding all the powers of the state in Nicaragua, the Sandinista rulers—the Ortega-Murillo presidential couple—also plan to subjugate the country’s informal institutions: private associations, charitable organizations, political parties, universities, the press, and churches. That plan was briefly interrupted by a massive but peaceful popular revolt in 2018. The Sandinistas crushed the revolt with brutal force, killing more than 300 citizens, and have since accelerated their designs for total domination of Nicaraguan society.

Since 2018, the ruling couple have systematically attacked and aggressively neutralized real and perceived opposition leaders, would-be political candidates, peasant and student leaders, dissenting intellectuals, entrepreneurs, and journalists. The couple have muzzled private associations, corralled with controlling legislation all charitable activity, outlawed uncooperative political parties, and crushed or chased out of the country the last few autonomous journalists. Hundreds among such citizens were abducted, tortured, and imprisoned on fabricated charges of treason or corruption. In the Sandinista Nicaragua of the Ortega-Murillo clan, persecuting journalists is lawful. The regime has erased almost all independent spaces for political expression.

Ahead of the November 2021 national elections, which they stole, the ruling couple snatched 46 prominent citizens, all of whom were charged under new laws that criminalized criticism of the regime. In December of 2021, they expelled the Taiwanese mission and declared fealty to Beijing. Then in February 2022, political show trials mounted the persecution of active and suspected opponents, and the regime cemented the predetermined guilt of those falsely accused before the election. At least one of those prisoners died in the Sandinista dungeon: El Chipote in Managua.

Having crushed or silenced all civic dissent, the Roman Catholic Church is now the focal point of attack. During the repressive wave of brutality in reaction to the 2018 protests, the Sandinista wolves met courageous resistance from clerics defending their flock peacefully. Sandinistas have rightly identified the Catholic Church and its irritably independent social infrastructure as their main obstacle.

The regime closed a dozen private universities, declared them illegal, and forced several to amalgamate into three state-controlled universities between December 2021 and the following April. A few of those were Catholic institutions. In March 2022, the regime expelled the senior Vatican diplomat, Nuncio Waldemar Sommertag. In May, the government shut down the Catholic TV channel directed by Monsignor Rolando Álvarez, the bishop of Matagalpa. (Matagalpa, coincidentally, is the cradle of the Sandinista guerrillas.) In July, Ortega-Murillo expelled the order of nuns founded by Mother Teresa of Calcutta, the Missionaries of Charity. Authorities left 18 nuns at the Costa Rica border, forcing them to march out of Nicaragua on foot. The regime has revoked the legal status of more than 200 charitable organizations in the last 12 months and has encouraged over 190 desecrations and attacks on temples since 2018. Most recently, in August 2022, Ortega-Murillo ordered seven additional Catholic radio stations closed, arrested several priests, and banned some processions and religious festivities.

In early August, Bishop Álvarez was placed under house arrest at the Matagalpa diocesan residence. Armor-clad riot police surrounded the house, monitored with aerial drones. Álvarez is falsely charged with “using social media” to “organize violent groups, inciting them to carry out acts of hatred against the population, creating an atmosphere of anxiety and disorder, disturbing the peace and harmony of the community,” all with the purpose of “destabilizing the state … and attacking constitutional authorities.” At the time of writing, government forces had abducted Álvarez after storming the residence at dawn. His whereabouts are unknown.

Although Ortega-Murillo now call Catholic clerics “devils in cassocks” and charge them as “terrorists,” a significant number of clerics became militant members of the violent guerrilla band in the late 1970s and 1980s, defying Pope John Paul II’s authority. Miguel D’Escoto was minister of foreign affairs and UN ambassador; Ernesto Cardenal was minister of culture; and Fernando Cardenal was minister of education. Their liberation theology became a useful tool to the revolutionaries. They eventually distanced themselves from the regime—far too late in my view—and later became objects of persecution.

Edgard Parrales, a former priest, became minister of national welfare and the Sandinista ambassador to Taipei and to the Organization of American States (OAS). He was recently condemned on trumped up charges of treason for criticizing the ruling couple’s lust for power. (Full disclosure: Edgard is my father’s first cousin.)

The rash of renewed Sandinista attacks on priests and Catholic social infrastructure are part of the broader strategy to install a totalitarian branch plant mimicking the new Beijing model. The Catholic Church is the country’s only and last remaining institution outside the clutches of Sandinista control. Accordingly, attacks against her are intensifying. Nicaragua’s Catholic Church is in distress, but Rome remains silent. Nicaragua’s clerics now stand alone as the last hurdle for the Ortega-Murillo clan’s plan to control the totality of Nicaraguan society.