Proposed Constitution Would Be Suicide for Chile
Skip to content 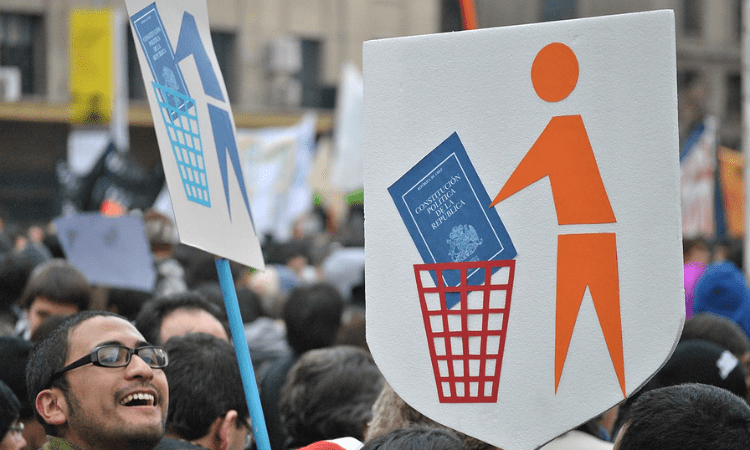 The new constitutional document would turn demagogy into a formalized aspect of Chile's political landscape. (Simenon)

On September 4, Chileans will decide whether to adopt or reject a new magna carta in a mandatory referendum. Surveys suggest rejection will prevail, and President Gabriel Boric warns he will not accept that decision. The new proposed constitution is crucial for executing his grandiose campaign platform.

If rejected, Boric says will restart the constitutional drafting process. This demonstrates his antidemocratic proclivities—akin to Juan Manuel Santos, who ignored voter rejection of the FARC deal in Colombia. The measure would also deepen legal uncertainty in the nation that, for four decades, has been the most prosperous in Latin America. Insofar as it has defended individual liberties and limited abuses of power, the prevailing constitution has been a cornerstone of Chile’s development.

Boric wants to open the door to profound interventionism and arbitrary rule at his discretion. Opposition leaders have denounced that he and his cabinet are campaigning for approval. Opponents also claim that Boric is using the government headquarters as the coordination center. They referred to a tweet by socialist legislator Leonardo Soto convening a meeting in the Moneda Palace, which then was deleted and denied.

A Solution in Search of a Problem

The violent riots that exploded in Chile in October 2019 pressured then President Sebastián Piñera into initiating the process for a new constitution. In 2020, Chileans ratified their willingness in a referendum for a new magna carta with 78 percent of votes in favor. On that occasion, however, voting was not mandatory; 50 percent of registered voters did not attend.

The main argument for a new constitution is that dictator Augusto Pinochet signed it. Nevertheless, this has been subject to 257 amendments through the passage of 52 laws. In 2005, then President Ricardo Lagos replaced Pinochet’s signature with his own.

Adopting the new proposed constitution implies a 180-degree pivot for Chile. First, the Southern Cone country would transition from a republican state to a “plurinational, intercultural, regional, and environmental state.” The 11 different indigenous nationalities residing in Chile will have, at least on paper, the opportunity for some autonomy for their own governance, justice, and land distribution. This would split the country into 12 jurisdictions, but not necessarily along geographical lines.

Moreover, congressional decision-making would rely on simple-majority voting, and the new constitution would eliminate the Senate. Chile has had a bicameral system since 1812.

In the same vein, the new document would likely end any notion of central-bank independence. It would allow the removal of its members for political reasons.

Ratify It So We Can Amend It Later

The new proposed constitution is so primitive and wrongheaded that proponents, as a campaign tactic, are pledging constitutional amendments after its approval. The alliance of leftist political parties has committed to reforming key tenets: the concept and scope of plurinational and social rights, the political system and the judiciary, and the structure of national and domestic security. They are, however, turning a blind eye to other concerns, such as Senate elimination.

Their strategy is to persuade citizens to vote in favor of an unconvincing, poorly written text. While Boric would get the green light he needs to implement his socialist plan, there is no certainty at all that they would reform—and for better—the constitution later.

The new proposed constitution would expand political power by paving the way for further governmental intervention in individuals’ daily lives. It would introduce a long list of so-called rights, which would require more taxpayer money.

() Rejection is the best path ahead.

Light at the End of the Tunnel

With the prevailing constitution, Chile achieved economic prosperity and social well-being. From being one of the poorest countries in the region in the 1980s, it turned into the leading nation in development rankings.

Chile occupies the first position in the region in the Human Development, Human Freedom, Economic Freedom, and Global Competitiveness indexes. It is ranked second in the Global Prosperity and Corruption Perception indexes and third in the Quality of Democracy Index. Despite this, the country’s economic growth has slowed since 2014, when social disruption and political fragmentation spiked.

Since the 2019 riots, Chile has been in a deadlock. This year, Chile became a member country of the Organization of Economic Cooperation and Development (OECD), and its citizens have performed worst of all members across a variety of economic measures. In Q1 of 2022, for example, average household real income fell by 10.4 percent due to inflation and the economic downturn.

The revolutionary experiment led by the extreme left in Chile has hindered the country’s institutionality and stability. Chileans have perceived this descent, and now the left faces an unexpected challenge: the potential rejection of this utopian constitutional document.

Chileans should treasure the country’s long-standing legal certainty and defend their decision on the September 4 referendum. Venturing again into a constitutional drafting effort is an enormous and precarious responsibility. This would impede individuals and businesses from making mid- to long-term projections and decisions.