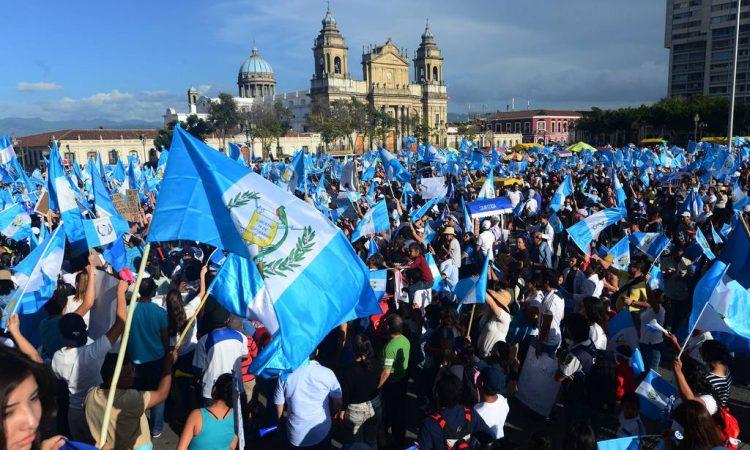 Guatemala's election dodged a bullet and was consistent with the rule of law. (ElSalvador.com)

In her first round of presidential voting on September 6, Guatemala narrowly avoided a coup d’état which would have cancelled elections and kept them cancelled for a long time. With a presidential runoff scheduled for October 25, the country has now stepped back to the relative comfort of being a haven for corruption, as she has been throughout her history.

While relief at the outcome was natural, optimism for the future is another matter. The forces that were edging the country toward a coup are still in place and ready to try again. Like an enormous mass of gelatin that has been pushed back on one front, the pro-coup party will sooner or later push forward on another.

One wing of the pro-coup party is the guerrilla phalange. A second wing is led by the UN agency, the International Commission against Impunity in Guatemala (CICIG), which is backed by the United States.

The CICIG has become the adjunct of political insiders whose governance rests on a base of systemic corruption. The “pinnacle” of oligarch leaders promote this corruption — often against the interest of the private sector — to keep themselves and their oligarchic privilege above the law; while the guerrilla also foster corruption to blackmail the oligarch leaders and gain a chunk of power for themselves.

Those odd bedfellows now work in tandem, with backing from the CICIG and the administration of US president Barack Obama. The arrangement is an insult to most Guatemalans, who are blocked every day from getting their fair chances in society.

As an established party among these players, the CICIG has grown its power in a manner impossible to ignore. In 2010, it engineered the removal of a sitting attorney general, Conrado Reyes, with a transparent campaign of defamation. This year, the CICIG procured the indictments of President Otto Pérez and Vice President Roxana Baldetti with still-unproven assertions that those officials were leaders of a corruption scheme.

Guatemalans have been thrilled to see the CICIG pursue their former heads of state, and continue to cheer the prosecution of officials. In the last week alone, a former customs administrator, an appeals-court magistrate, and two judges have all been arrested and charged with crimes by the Justice Ministry, acting at the behest of the CICIG.

The enthusiasm that many Guatemalans feel about the CICIG needs to be understood in the context of a society that has never known the actual rule of law. It is the same enthusiasm that people felt on seeing the first displays of power by communist and fascist regimes which, in their turn, became the monsters of modern history.

The CICIG’s case against Pérez and Baldetti looks compelling until you examine the facts. The bribery ring that the CICIG linked to their names had been operating for decades. The CICIG itself, during the first seven years of its own operation, had left the bribery ring untouched.

Especially with its backing from the US embassy, the CICIG now decides by itself who can serve in Guatemala’s government. The charges against Pérez and Baldetti will not require proof, because the CICIG has established an absolute power of condemnation over its targets.

By August and September of this year, the CICIG’s real target had become Guatemala’s electoral system itself. The CICIG’s actions had joined with the advocacy of radical groups who were demanding that the elections be called off.

The danger was real enough for the Organization of American States (OAS), the only major international actor that showed integrity in the crisis, to issue an urgent warning. On August 23, two weeks before the vote, the OAS secretary general released a statement saying: “it is essential that the elections be held under the existing constitutional framework.”

Less than a week before the polling, a good friend of ours, retired from the US government, told of running into a European envoy he knew. This envoy had just attended a briefing by US officials on the subject of electoral corruption.

To be sure, the US embassy issued its own statement with fine-sounding words about the coming elections. “We encourage Guatemalans to responsibly exercise their democratic right to vote,” it concluded most properly.

But the embassy’s earlier, blazing endorsement of the CICIG’s report on corruption had directly told the Guatemalan people to rise up against the established order. “The report makes it clear that the political classes have been mocking the Guatemalan people. Guatemalans deserve better. They have suffered under these conditions for too long.”

That last statement is Maoism pure and simple. Even more than an ideology, Maoism is a method of command. Whereas Marxists or guerrilla bodies create insurrections from below, Maoists instigate them from above, as Mao did.

President Obama, with his encouragement of the Ferguson rebels and of the Black Lives Matter movement in the United States, has today become the world’s leading Maoist; and his embassy in Guatemala has followed suit.

In Guatemala, the guerrilla tried for 40 years to come to power via a movement from below, and failed at every turn. In recent years, the CICIG and the Obama administration have been trying to institute an insurrection from above. To date, the Maoist move in Guatemala has not succeeded; the successful vote of September 6 was the latest check to it.

When the voting went off well, US Ambassador Todd Robinson jumped to the other side and praised the newly emerging democratic awareness. But his praise only exposed the void which now lives at the heart of US policy.

Recent troubles in Syria illuminate the matter perfectly. Testifying before a Senate committee, the general in charge of the US central command acknowledged that the Pentagon’s program for opposing the expansion of the Islamic State has not measured up. After a year of work, and tens of millions of dollars expended, the number of US-trained anti-ISIS fighters in Syria is only four or five.

The worst of this matter is in the White House comment about it. On September 16, Obama spokesman Josh Earnest said the president had only approved the training program under pressure from critics. Now that the program had come up short, it was the president’s critics who should be blamed. In Josh Earnest’s phrase: “That is not something that this administration ever believed, but it is something that our critics will have to answer for.”

That statement is a death-knell for US foreign policy. If a US commander in chief is permitted to be so negligent or unconcerned in his choices, then the policy no longer exists.

By that measure, even the corrupt, predatory system in Guatemala seems more dependable than the one in the United States. And the president’s abdication of policy is a call for responsible actors everywhere to guard against US influence — at least until a change occurs in the country’s leadership.