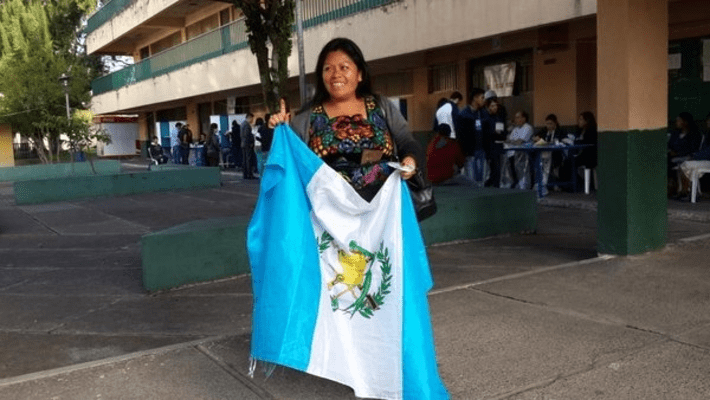 A young woman celebrates the victory of peaceful elections this weekend in Guatemala. (@sblaskey)

The first round of presidential voting in Guatemala is over, and the surprise winner is … Guatemala itself. The contest between the various candidates had been largely overshadowed by the imposition of criminal charges, only a few days before the vote, against the president and vice president — a situation that had taken the country to the edge of a coup d’état.

Indeed, as at least one international medium was forthright enough to note, the election had failed to meet a widespread demand in the country — namely, the demand that the election itself not take place, because it would be an election that “offered little alternative to the old guard.”

The intent to invalidate the election had been a powerful one. How had it been derailed? In a word, the people rose up and claimed their right to choose. When the polling was done, the Supreme Electoral Tribunal could affirm that 70.38 percent of registered voters had cast ballots. This was the highest figure in 30 years of Guatemala’s current electoral system.

It was also a figure larger than any seen in a US presidential election since 1900.

As it happens, US media had openly derided the coming elections, given the sordid melodrama that unfolded when Guatemala’s former vice president, and then its sitting president, went into jail only days before the polling.

“Guatemala is Having an Election Today, but Who Cares?” was the headline at allmediany.com.

“With seemingly the whole political class under suspicion or investigation for corruption or some other type of mischief, former comedian and relative political newcomer Jimmy Morales appears to be the frontrunner, if Guatemalan polls are to be trusted — and they’re not.”

Actually, the polls had it right. Newcomer Jimmy Morales finished ahead of the two “insider” candidates by a substantial margin. The two insiders — meaning, politicians with whom the political class would feel comfortable — are former front-runner Manuel Baldizón and former first lady Sandra Torres, who in 2011 divorced her husband, ex-president Álvaro Colóm, in order to be eligible to succeed him.

Torres is preferred by the insiders; she is also adamant about her support for the International Commission Against Impunity in Guatemala, the CICIG, without whom she says she could not govern.

As of this writing, Torres holds a slim lead over Baldizón for second place and a spot in the runoff election. She claims that she would easily beat front-runner Morales in the runoff. But Sunday was Morales’s day, and he could well take the prize in the runoff on October 25.

The significance of Morales’s finish is that it poses the kind of threat to Guatemala’s insider political order that the pundits had called impossible. A wild card is at loose in the country’s politics — and the powers-that-be are not likely to accept it with good grace.

The pre-election crisis had been unchained by the CICIG. An agency of the United Nations, the CICIG describes itself as “an independent, international body designed to support the Public Prosecutor’s Office (MP), the National Civil Police (PNC) and other State institutions.”

In actuality, the CICIG is a foreign body at the heart of the Guatemalan state, which recalls the dreaded papal emissaries of old. It is a political player, not a legal arbiter. In its preferences, and in violation of its own mandate, the CICIG firmly supports the network of the guerrilla militias that presently lord it over much of Guatemala’s rural population.

The CICIG has termed these militias “human-rights groups.” The militias were protected by the country’s last attorney general, Claudia Paz y Paz — a fact that prosecutors in her own ministry discovered to their dismay.

By early this year, as the CICIG’s mandate approached its renewal date, opposition to its continued existence was coming from top levels. Roxana Baldetti, the vice president who now sits in prison on corruption charges, declared that Guatemala “won’t need someone to help it cross the street forever.”

President Pérez, without saying anything quite so sharp, also stated his doubts about renewing the CICIG. In April 2015, the CICIG counterattacked by implicating Baldetti in a corruption investigation. The president got the message; on April 23, he announced he would ask the UN secretary general to extend the CICIG’s mandate for another two years.

Pérez’s acquiescence didn’t save him. Indeed, it sank him. After complying with urgent requests to retain the CICIG — including a personal plea from the US ambassador — Pérez was shafted by the very people he had agreed to keep around. It was a political hit job, dressed up in the language of law and ethics.

Why did the CICIG do it? The evident motive was to roil the elections. For the prior year or more, various radical groups had been saying that Guatemala’s official corruption made the country unfit for elections.

Instead, the radical groups had said, elections should be suspended in favor of a constitutional convention and thoroughgoing social reform.

This is precisely the formula that Fidel Castro offered to Cuba in May 1960. Today, 55 years later, it seems the Cuban people are still not mature enough to elect their own leaders.

The CICIG’s action against Pérez emboldened the anti-system radicals to press their program, which the international press dutifully endorsed. At the same time, the fall of Pérez and Baldetti awakened a huge faction on which the CICIG apparently had not counted.

This faction was the very group that Pérez had said would vindicate him — the people he calls “deep Guatemala” — the vast populace that struggle for their daily living, and viscerally hate the corruption regime which spoils their chances in society.

This populace have no love for Pérez, whom they rightly see as another politician feeding his own face. But they hate Pérez’s radical enemies just as much — and on this polling day, which the radicals were hoping to make into a fiasco, the people turned out in record numbers to make their wishes known.

Claudia Paz y Paz, who as Guatemala’s last attorney general drove the country to new extremes of social conflict, is now a scholar-in-residence at Georgetown University, where the foreign-policy establishment of the Democratic Party has sheltered her. In an interview with the New Yorker, Paz y Paz predicted: “These elections will not be held under normal circumstances. The vote in urban areas will probably be very low. People do not trust the political system anymore.”

The magazine took Paz y Paz’s line and ran with it. It proved to be utterly false. Despite threats of disruption, and despite some typical foibles, the turnout was orderly, and it was huge.

By noon Sunday, some 52 percent of Guatemala’s registered electorate had voted. Guatemalans had gotten on a par with voters in US presidential elections, who since 1972 have produced turnouts no higher than the low- to mid-50s. By the end of the day, in percentage of electoral participation, Guatemala’s statistic had bettered US voting figures for every presidential contest since 1900.

Now, it seems, the sleeping giant has not merely awakened but has handed a wild-card candidate to the cloistered, intensely conservative world of Guatemala’s political insiders. Those insiders will be especially shaken if Morales wins and successfully executes a policy against official corruption. That would be the ultimate catastrophe for the powers-that-be, whose rule over the country directly depends on corruption.

Strange as it might seem, Guatemala is presently governed by a “pinnacle” of the wealthy elite that work in tandem with the radical or guerrilla faction. It’s an exotic, uneasy alliance in which the pinnacle elite often betray the interests of their fellow oligarchs who are not playing the game.

In this matter, the guerrilla are not acting in the pursuit of equality or justice. They are playing a corrupt game of their own, with the capture of state power as the ultimate goal.

The CICIG officials, like papal emissaries of old, connive and manipulate within this balance of forces to find a secure place for themselves. They are on the side of the guerrilla; and, thanks to the United States, they have a big stick which they have used to extract concessions from Pérez’s government.

By literally cutting off the head of state, the CICIG made its major play with Pérez’s arrest. He and Baldetti, victims of the CICIG, are now lost to history. They cannot find vindication in Guatemala’s justice system, where an upstanding person may be ruined by a story while a killer goes free on a bribe. The best they can do is get out of jail, gather up their bank accounts, and slink away.

But the CICIG is now in difficulties of its own. It has shot its wad as a system player. Pérez, for all his faults, did everything the system expected of him; while the CICIG, with US backing, accepted Pérez’s favors and then chucked him in jail.

It’s a lesson about the CICIG that no future president, of whatever political color, is bound to forget. If you don’t deliver your part of the bargain, no one wants to deal with you. Even in corrupt Guatemala, it’s a badge of dishonor.

As for the guerrilla partisans, they are facing another kind of danger. The Obama administration, a trustworthy supporter, has loomed behind their program for the last six years. In 2016, that could all go away. A Republican president is certain to yank the plug on guerrilla power in Guatemala, which would also mean lights out for the CICIG. Even the accession of a moderate Democrat could have the same effect.

As the popular protest of recent weeks has shown, and as the polls have massively confirmed, the chain of events unloosed by the CICIG has brought “deep Guatemala” quite a bit closer to the political action.

That fact obliged the US ambassador, Todd Robinson, to put on a happy face. On election Sunday, he went before the cameras to say he had traveled around the country and had seen for himself that the election was well produced. The ambassador averred he was glad that the Guatemalan people were using the election to take their destiny in their hands.

What began, then, as a sordid political melodrama has a chance for a happy ending. Political classes tend to act in line with well-rehearsed motivations. But the people, as Abe Lincoln would say, always have it in them to surprise you.