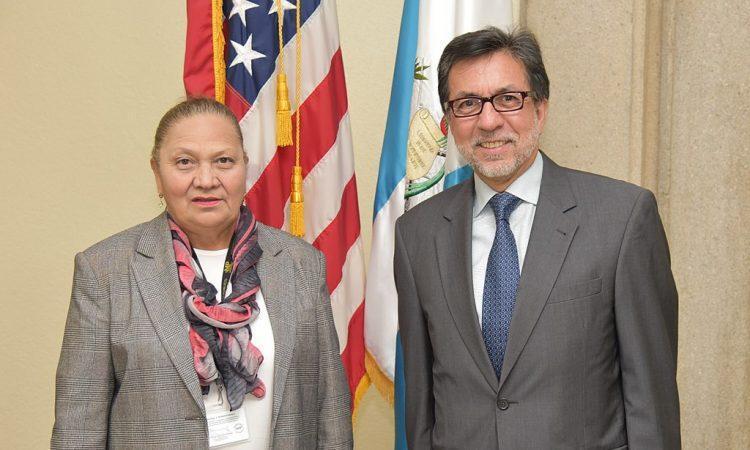 The Trump administration is forceful against human-rights violations in Iran, while it promotes them in Guatemala. The State Department, under Obama holdovers, is undermining the Trump strategy of peace through strength.

In a society with the individual rather than the collective as its core, no rights are more fundamental than life, liberty, and property—not to be deprived without due process of law. An accused person must be able to confront witnesses against him and obtain witnesses in his favor. The State Department has shown contempt for these rights, contained in the fifth and sixth amendments to the Constitution.

With a collectivist political agenda, State Department representatives in Guatemala have validated a court proceeding known as the Molina Theissen trial. They have publicly supported the process that has deprived four military veterans of these rights, also contained in Guatemala’s constitution. The blatant due-process violations constitute a show trial, along the lines of dictatorships such as Nazi Germany and Soviet Russia.

The veterans, over 75 years of age, were convicted in May of crimes against humanity, rape, and a forced disappearance, allegedly committed in 1981 during Guatemala’s internal armed conflict (1960-1996) against Fidel Castro-backed guerrillas. The prosecution presented no direct or forensic evidence against them. The judge used uncorroborated accuser testimony to convict the defendants and denied the defense cross-examination of the principal witnesses.

The prosecution did not charge these men with personally committing the crimes or even ordering or knowing about them. They were convicted because of their army positions when the alleged crimes took place. The judge’s father was a guerrilla who died in the hands of the army, which legally obligated him to recuse himself. In addition, the supposed rape victim admitted she was a guerrilla.

The alleged forced disappearance was of a then 14-year-old brother of the alleged rape victim, whose fate and whereabouts are unknown. The only evidence was the mother’s testimony, that the boy was taken by the military. She testified the abductors were military because they wore Ray-Ban sunglasses.

In his sentence, the judge ordered government agencies to do things beyond the court’s authority. He ordered the Guatemalan Congress to pass a law and the Defense Ministry to create an award named after the minor whose disappearance he convicted the defendants of without evidence.

David Mandell-Anthony, a senior State Department official, previously with a George Soros organization, attended the trial. In an interview with local media, he said his participation in the trial assured it was “credible, independent, transparent, and impartial.” He referred to the charges as facts and the case as symbolic, because “there are thousands … who have lost relatives through disappearance.”

US Ambassador to Guatemala Luis Arreaga attended the sentencing, at which four defendants received 38 to 58 years in prison. The embassy tweeted, “We support an independent and efficient judicial system.” Observers noted the ambassador was friendly with the director of a co-plaintiff NGO, a frequent visitor to the embassy.

The controversial commissioner of the International Commission Against Impunity in Guatemala (CICIG), Iván Velásquez, was also involved. Initially a two-year UN project beginning in 2007 and extended under Obama administration pressure, the CICIG has come under congressional examination for collusion with Russia and violating the rights of US citizen Anthony Segura. The State Department, the CICIG’s strongest advocate, hides negative aspects from Congress.

Although unrelated to the CICIG mandate, the commission’s operatives were present at the arrest of the veterans. Velásquez appeared in a photo with the alleged victim and her family, all smiling.
The Molina Theissen trial was clearly political on the part of the guerrilla successors, who have taken over Guatemala’s judicial branch with active intervention by the Obama administration. The prosecution and the hanging judge determined the outcome before the investigation began. Twelve hours after the verdict, the judge issued a 1,075-page ruling, obviously written in advance.

The Islamic Republic of Iran has committed human-rights violations since its founding. In 2009, the Obama administration ignored the Iranian people’s protests. Now they are protesting again, and the Trump administration supports their legitimate aspirations. Their options, however, are limited because the mullahs who run the country view the United States as an enemy.

In contrast, President Jimmy Morales of Guatemala is a US ally. His administration was one of seven countries that supported the United States in the UN vote on moving its embassy to Jerusalem, and one of the two countries to also move their embassy to Jerusalem. Morales is a victim of the State Department, the rogue judiciary it helped create, and the CICIG, which has tried to remove him from office.

Trump could solve the Guatemala human-rights abuses if he were to control his own State Department and support his ally Morales.