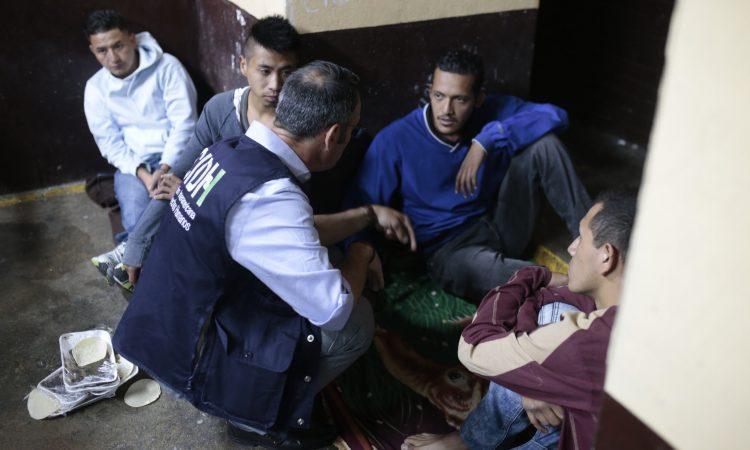 Cutting assistance to Guatemala would lessen the strength of entities subverting the country. (CIDH)

A little-known fact about foreign aid stops it from serving U.S. interests. Distributed through the State Department and USAID, taxpayer funds mostly go to enemies of American ideals and the rule of law.

President Donald Trump, as he opposes the organized wave of illegal migrants from Central America, should be aware that U.S. funds contribute to the problem. This breach of public trust means that Trump is right to “begin cutting off, or substantially reducing, the massive foreign aid routinely given to them.”

A rejected application to USAID, the State Department’s foreign-assistance arm, illustrates the problem with the $16.8 billion allocated specifically to aid programs (out of the $39.3 billion State Department budget). Those at the helm have a politically correct, central-planning mentality, with no understanding of free enterprise, bottom-up order, and personal responsibility.

Although the applicants can’t speak publicly without risking future business deals, one project met the criteria of providing an opportunity to poor people and supporting them to thrive in their own nation. A Guatemalan and a prominent international company created the project to organize farmers into cooperatives and grow an agricultural product. The project would have involved about 4,000 growers in the country’s poorest areas, including along the Mexican border.

However, the application was never approved.

The venture would have given the growers financial and technical assistance and a guaranteed buyer at a transparent market price, less a commission. The partners would assure a minimum price profitable to the growers. The mission was to create a sustainable, vertically integrated supply chain from micro-producers to final consumers.

The companies could have grown the product themselves or arranged to buy it from several larger farms. Small farmers could be the most cost-effective, with the proper organization and assistance. This process, however, entails risk and a time-consuming setup—hence the request for a USAID grant.

USAID criteria include financial, technical, and organizational assistance to poor people, as well as an emphasis on women and environmental friendliness. Without a doubt, the joint venture met all the stated conditions.

There is an unwritten USAID criterion, however, that the companies couldn’t satisfy. They wanted to empower individuals; the State Department favors organizations that promote progressive social goals, which lead to dependence and centralized control. In contrast, cooperatives are voluntary associations in which each member receives the result of his production, minus expenses for member-accountable management.

The areas in which the project would operate have hardly any state presence and are dominated by armed groups descended from the guerrillas from Guatemala’s internal armed conflict (1960–1996)—a strong disincentive for private investment. The State Department had a central role in creating these conditions and chose not to back economic development.

The Obama administration systematically pressured various Guatemalan administrations to place guerrilla-successor allies in key government positions. Former Vice President Joe Biden, for example, traveled to Guatemala three times in 12 months to pressure the government. His motive was an extended mandate for the UN anti-impunity commission (CICIG), which had already become what it was created to eliminate.

The gangs force locals to attack and close factories, invade private property, and deny authorities access to residential areas. Naturally, the ensuing increase in violence and lack of opportunity creates migration and guarantees an open channel for smugglers of people and materials.

Numerous NGOs participate in this violence and lawlessness. The Guatemalan equivalents of Antifa and Black Lives Matter formalized themselves after the 1996 peace accords. These organizations continue to seize political power in Guatemala for themselves and other radical collectivists. Judicial Watch identified more than a dozen “entities funded by the U.S. government [that] are furthering the Soros agenda in Guatemala and get money from the leftist billionaire.”

Judicial Watch reports that the Soros groups seek “to destabilize legitimate governments, erase national borders … and orchestrate refugee crises for political gain … Guatemala, in particular, has been subjected to an aggressive, insidious campaign of subversion … that threatens the sovereignty … [of an] ally of the United States.”

Cutting assistance to Guatemala would lessen the strength of entities subverting the country, a plus for Guatemala and U.S. taxpayers.

Guatemala is the key country in the only land route from Central and South America to the United States. If the Guatemalan government were to apply the law properly, especially in border areas, it would liberate inhabitants from their oppressors and promote business development. A grateful population would cooperate with security forces to identify suspicious activity, leading to a significant reduction in the flow of illegal migrants and narcotics.

To achieve this, Trump and Secretary of State Mike Pompeo must change the Obama policy and fire State Department globalists. That includes Obama henchman, former U.S. Ambassador to Guatemala Todd Robinson, who’s now a senior advisor for Central America. U.S. aid could then go to increased security and projects that empower individuals and create broad capital ownership—the best policy for development and defense against collectivism.