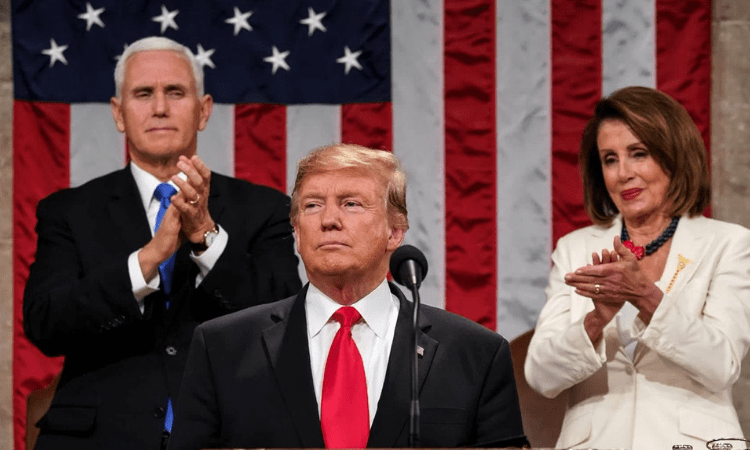 In his State of the Union address, President Donald Trump said the United States needs “to create an immigration system that is safe, lawful, modern and secure and to pursue a foreign policy that puts America’s interests first.”

To resolve the immigration crisis, Mr. Trump must confront radical socialists in Latin America who oppose him and all that America stands for. They have brought the region to its knees and catalyzed waves of caravans marching north.

Vice President Mike Pence, also aware of destruction south of the border, went to Florida recently and rebuked strongman Nicolas Maduro: “When the dictator came to power six long years ago, he promised to deliver an agenda of socialism Sadly for the Venezuelan people, Maduro did just that.”

The vice president correctly called out a leader whose predecessor and mentor, Hugo Chavez, was aided into power by Fidel Castro.

Mr. Pence noted that socialism has shrunk Venezuela’s economy by nearly half. More than nine out of 10 people live in poverty, and the average Venezuelan has lost 20 pounds through deprivation and malnutrition. As Mr. Pence said, “those who stay behind are subject to lawlessness and crime, as well as deprivation.”

The same virus of Cuban origins is causing massive migration from and through Central America to the United States. The damage done by Castro is still felt terribly in Venezuela and wherever his allies remain active.

In the early 1970s, Castro created Cuba’s America Department to initiate Marxist-Leninist violence throughout Latin America. Many rural areas in the region remain in chaos to this day as a result. In Guatemala, remnants of the old Castro-supported rebels maintain lawlessness and keep the population in submission.

The “Worldwide Threat Assessment” recently presented to Congress predicts even more immigration from the region. Guatemala is already the origin of an estimated 723,000 illegal immigrants in the United States, second only to Mexico (6.1 million). El Salvador is third (465,000), and Honduras is fourth (337,000).

I am an American businessman who has lived in Guatemala for more than 40 years. I am a 2,000-mile flight away from my hometown of New York City, but I appreciate the people and culture here.

I have written extensively on the issues confronting Guatemala, and I have interviewed coyotes who smuggle people into the United States. Migrants have shared their stories and why they flee their beloved countries. Principally, they fear for their safety.

Cuba’s America Department funded and trained guerrillas during Guatemala’s 36-year conflict. At Castro’s insistence, in 1982 the URNG (Guatemalan National Revolutionary Unity) became the umbrella group of four terrorist organizations attempting to overthrow the government. The four groups disbanded with the 1996 peace accords, and the URNG became a political party with the same socialist ideology.

While President Obama was embracing the Castro regime in Cuba, his State Department headed by Hillary Clinton was embracing Castro radicals in Guatemala. We have seen the result of Mr. Obama and his allies’ policy in Guatemala: Increased violence and decreased opportunity, a potent combination for the flow of illegal migrants and drugs.

Secretary of State Mike Pompeo recently noted how the hangover from Mr. Obama’s Middle East policies still plagues us there. The same can be said for Latin America. In particular, communities along the Mexican border areas are hungry for opportunity. They support legitimate authority and want to be rescued from their guerrilla-successor oppressors.

The United States is fortunate President Jimmy Morales was able to defeat former guerrilla and Socialist International Vice President Sandra Torres for the Guatemalan presidency. The victory put in place a potential partner for Mr. Trump.

As an American in Guatemala, I encourage the Trump administration to work with Mr. Morales. Mr. Morales could use his U.S.-trained elite security forces to enforce the law against illegal armed gangs. A grateful rural population would cooperate to identify suspicious activity in their communities.

The combination of proper law enforcement and community engagement would undo Castro’s efforts and impede illegal traffic. Success in Guatemala would add another layer of security to Mr. Trump’s border wall.

This article was first published in The Washington Times.
Lea en español.