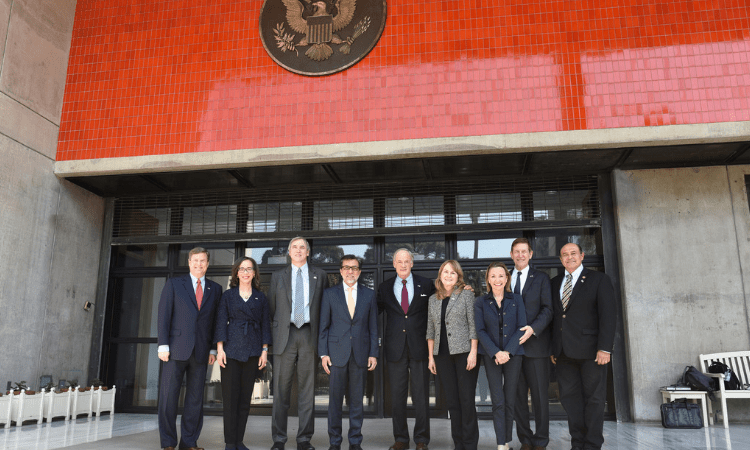 The State Department and its local partners have poisoned the electoral environment. (US Embassy Guatemala)

State Department bureaucrats are undermining Secretary of State Mike Pompeo and President Donald Trump by attempting to steal Guatemala’s 2019 elections. A tampered result would create an adversarial government that would increase the flow of illegal migrants and drugs to the United States.

As Barack Obama changed US policy towards Cuba, his officials also embraced successors to guerrilla groups propped up by Fidel Castro across Latin America. That included Guatemala, where US officials imposed radical socialists on the government. This made law enforcement effectively impossible on Guatemala’s 595-mile porous border with Mexico.

Unable to cancel the 2015 elections, US Ambassador Todd Robinson and Commissioner Iván Velásquez of the UN anti-impunity commission (CICIG) backed Sandra Torres of the UNE Party. A former guerrilla and vice president of Socialist International, she lost the presidential election by one-to-two to then-candidate Jimmy Morales.

Robinson and Velásquez then worked with Guatemalan Attorney General Thelma Aldana, whom they coopted for their agenda. Together, they illegally tried and failed to amend Guatemala’s constitution to control appointments to the judiciary and attorney general. Preparing for the 2019 elections, they changed the electoral law to favor the UNE Party.

Robinson’s most significant illegal intervention was the 2016 reappointment of magistrate Gloria Porras, first appointed by Torres’s then-president husband in 2011, to the Constitutional Court (CC). Confirming Robinson’s role, Congressman Fernando Linares stated Porras told other magistrates they would be subject to investigations if they didn’t rule as Robinson wanted.

Trump’s election was a potential catastrophe for the socialists. Permanent State Department people had to exercise more caution compared to their open intervention under Obama.

Not surprisingly, Robinson’s successor, career functionary Luis Arreaga, has continued his predecessor’s policy. Arreaga has defied his bosses by supporting the CICIG, which repeatedly violated its mandate, Guatemala’s sovereignty, and the law. The CICIG entered into an illegal agreement in August with Guatemala’s electoral authority (TSE).

The 2016 electoral law shortened the 2019 campaign to three months, limited campaign spending by political parties, and established strict requirements regarding transparency of contributions. While some of this is sensible, that only holds if applied to all parties, which is not the case.

Since the new CC term began in 2016, the three-magistrate majority created by Robinson has consistently issued illegal rulings. They have protected their allies and punished their enemies, increasing legal uncertainty, violence, and emigration. They have shut down businesses and usurped executive and legislative powers.

The three prongs of the trident—the US embassy, the CICIG, and the judiciary—have worked in concert for almost three years, until Morales expelled the CICIG in January. The CC now carries the burden of assuring success for the socialist agenda.

A criminal complaint against CC magistrates recently went to Guatemala’s Supreme Court (SC)—technically its highest court, but not in practice since the CC can overturn SC decisions.  Obligated by law, the SC sent the complaint to the Congress, which appointed a commission to investigate. The CC, with one of the accused magistrates joining the ruling, ordered the Congress to stop processing the complaint.

The CC magistrates in effect voted themselves immunity from criminal prosecution. The attorney general, illegally on her own, issued a statement she would process violations of the illegal court order, effectively intimidating the congressional commission to stop their legally mandated investigation.

Upon convening elections, the Valor Party nominated Zury Ríos Sosa for president. The TSE denied her registration on the grounds that her father, General Efraín Ríos Montt, had become head of state as the result of a coup d’état in 1982. This misinterpretation would deprive Ríos of her right to equal treatment. Nobody can be condemned for the actions of another.

The shortened electoral period and monetary restrictions give an advantage to those with high name recognition such as Torres. This advantage unavoidably included Ríos, a three-term congresswoman and daughter of Guatemala’s most recognizable figure in the last half century.

A Ríos presidency would be another catastrophe for the socialists. Robinson’s CC triumvirate and many other corrupt officials and conspirators would go into exile or face charges for obvious crimes. Based on their history of blatantly illegal rulings, we can expect the CC to overturn the SC or delay ruling until the last moment. That would deny or make useless Ríos’s right to be elected, as well as the Guatemalan people’s right to elect whom they choose.

The CC, attorney general, and TSE all maintain the CICIG continues despite the president’s justification and clear authority to end its mandate. The TSE and CICIG have absurdly interpreted the law to provide that any company doing business with the government is limited to $4,000 in campaign donations from all shareholders combined.

Fomenting the manipulation, Arreaga has intimidated members of large corporations from participating in politics. His intimidation has credibility, since the judiciary has persecuted and jailed many people for years without evidence and in violation of law.

In September 2018, Torres posted a photo of herself outside the State Department. She met with Robinson, now senior advisor for Central America. Clearly, he supports her again.

Meanwhile, Aldana has been party shopping, since her preferred party, Semilla, has not met electoral requirements. Unsuccessful in her overtures, she will work to get the party registered regardless. The party’s top official, Samuel Pérez Álvarez, also just met with Robinson at the State Department.

The State Department and its local partners have poisoned the electoral environment, eliminating viable competitors to Torres and Aldana. No doubt more illegal antics are in store to assure victory for one of the two, as is gushing support from socialist-leaning Democratic congressmen. Those who have already jumped on the bandwagon include Senators Thomas Carper and Jeff Merkley and Representatives Lou Correa, Don Veyer, Lisa Blunt Rochester and Donald Norcross.

Their victory, on the back of fraudulent elections, would complicate matters for Trump and the United States. Despite damage done by State Department underlings and their allies, prompt action—such as removing the ambassador—could give Guatemala and the United States a better chance to work together for their mutual benefit.