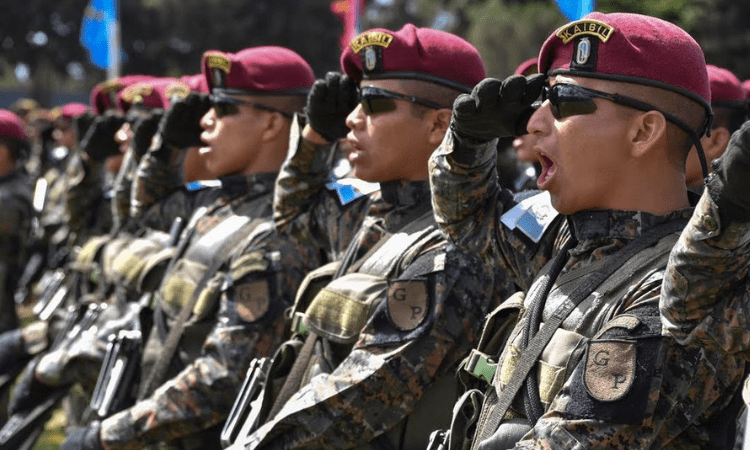 Morales should apply the law in these areas, for which he can use his elite security forces with Trump’s backing. (Elías Oxom)

The Department of Homeland Security (DHS) has deployed personnel to Guatemala to stop human smuggling and better understand the root causes of irregular migration. They need not go so far. A 15-minute drive to the Department of State would put DHS at the core of the problem.

Acting DHS Secretary Kevin McAleenan recently cited a study saying almost a quarter of Guatemalans, about 4 million people, plan to migrate to the United States. The secretary visited Guatemala the week of May 27 and finalized an agreement with its government. DHS will provide “law enforcement training and collaboration,” and its agents will deploy to Guatemala’s border with Mexico.

Guatemala “is a geographic ‘chokepoint’ for migration from the south up through Mexico,” according to Mr. McAleenan. I am aware of this as an American living in Guatemala for 46 years, only a short drive from where caravans pass en route to the United States via Mexico.

DHS agents will likely fail because the Guatemalan police and army have been degraded by Obama-Biden administration policy, continued under President Donald Trump by permanent State Department bureaucrats. These U.S. officials have exacerbated the lack of state presence in the border areas with Mexico, assuring the free flow of illegal migrants and drugs en route to the United States.

Rep. Vicente Gonzalez, Texas Democrat, wrote to Mr. Trump encouraging him to consider Guatemalan President Jimmy Morales’s offer to welcome U.S. troops to Guatemala’s northern border. U.S. troops are unnecessary. Guatemalans are capable of doing this themselves with political support from Mr. Trump and the release of already-earmarked foreign aid.

Guatemala uses U.S.-trained elite security forces — police, military and prosecutors — for counter-narcotics operations. Now that DHS has recognized the key role of Guatemala in illegal immigration, the Trump administration should work with Mr. Morales to use existing Guatemalan elite forces to address lawlessness in the border regions.

Mr. Obama helped the successors to the Fidel Castro-supported guerrillas from Guatemala’s internal armed conflict (196096) in their quest to control the country. Through pressure and corrupt deals, the State Department placed its allies in Guatemala’s government, critically in the public prosecutor’s office and judiciary. They protected guerrilla successor groups from criminal prosecution and persecuted legitimate authorities who attempted to enforce the law on the illegal groups.

Former Vice President Joe Biden traveled to Guatemala three times in 12 months to pressure the government to extend the U.N. International Commission Against Impunity in Guatemala (CICIG). U.S. pressure as the largest funder turned the CICIG into a battering ram for the U.S. ambassador. Judicial Watch and The Wall Street Journal reported CICIG criminality. With control of the judiciary and criminal prosecution, the ambassador could jail opponents without evidence and regard for law.

The guerrilla successors, called human-rights groups by the State Department and protected by the embassy cabal, force local inhabitants to participate in criminal activities. This includes destroying businesses and invading private property, which has resulted in less opportunity and increased violence and emigration.

Pursuant to an injunction request by a person associated with a guerrilla successor group, Guatemala’s Constitutional Court (CC) suspended the operations of two hydroelectric plants for failure to consult local communities. The American Chamber of Commerce in Guatemala (Amcham) issued a statement: “As a direct result of the CC’s rulings, more than 445,000 jobs and more than $780 million in annual tax revenues are at risk.” This is huge for a country of about 18 million people and GDP of about $75 billion.

The inhabitants of the communities testified they did not know the plaintiff and had been consulted and support the plants. Amcham said “We are in a period of radical ideological movements by social-conflict groups, with distortions and open opposition to any investment project, that do not show they legitimately or democratically represent the communities.”

In contrast to condemning illegitimacy in other places, such as Venezuela, the State Department remains silent on this harm to Guatemala and to U.S. interests.

Rural inhabitants who live under the cruel and arbitrary rule of the guerrilla successors yearn to be free. They have made hundreds of unheeded requests for army presence.

Mr. Morales should apply the law in these areas, for which he can use his elite security forces with Mr. Trump’s backing. Mr. Morales also needs to act, with support from Mr. Trump, against the criminal Constitutional Court magistrates to encourage the rest of the judiciary to properly apply the law. Mr. Trump and Secretary of State Mike Pompeo likewise have to neutralize the permanent State Department bureaucrats.

A grateful rural population, with physical and legal security, would not only have less incentive to emigrate but would be willing partners with security forces to identify suspicious activity. This would significantly reduce the flow of illegal migrants and drugs from and through Guatemala without the need for U.S. forces and with little additional expense.

This article first appeared in the Washington Times.