How Trump Can Defeat Democrats on Illegal Immigration
Skip to content 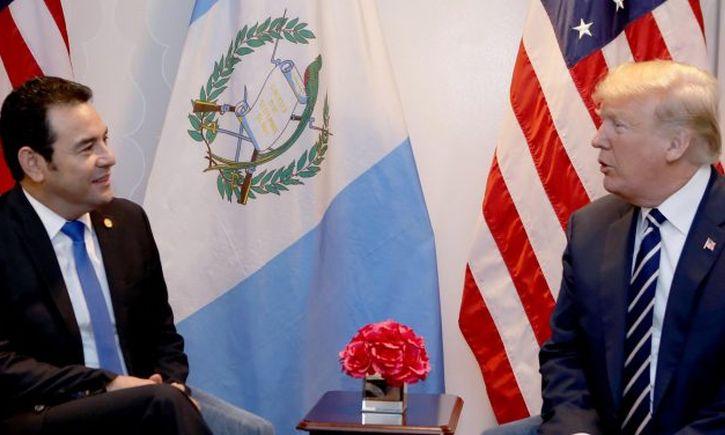 Trump cannot expect Morales to take the initiative. He must take control himself to get the safe-third-country agreement. (Presidencia Guatemala)

Protesters staged a national day of action last week at 180 locations against detention-center conditions on the US-Mexico border. While President Donald Trump blames Democrats for obstructing better immigration laws, he has another option. He could turn back illegal immigrants at the border and block them at the critical choke point.

Trump said in a June 26 speech and repeated to the press on July 5 he is close to a safe-third-country agreement with Guatemala. The administration could deny an asylum hearing to any alien who has passed through Guatemala—almost everyone now at the border. If they are assured to be turned back, the asylum flow would slow to a trickle.

Current US law requires a hearing for aliens properly requesting asylum. Federal agents can hold those with children for 20 days, and then must release them pending the hearing. The hearing wait can be absurdly long, and only a sliver turn up. The rest remain in the country—a de facto open border.

Congress could change asylum procedures and discourage those who don’t qualify for asylum—the vast majority—from making the perilous journey. Democrats encourage illegal immigrants to come to our southern border. They want new voters and to falsely portray Trump as racist and anti-Hispanic.

Guatemalans do not realize their leverage with Trump, and if they did, they would not know what to ask for. However, Guatemala’s and Trump’s needs converge completely. Trump could liberate Guatemala from the Obama-Biden policy, supported by Democrats and continued under Trump by the permanent State Department bureaucracy. This would simultaneously help Guatemala develop economically and reduce the flow of illegal migrants and drugs to the United States.

Guatemala had a presidential election on June 16 in which former guerrilla and Vice President of Socialist International Sandra Torres reportedly received the most votes. The runoff is scheduled for August 11. The election was fraudulent. The electoral authority (TSE) did not confirm the winners for more than two weeks and did not properly address numerous irregularities and more than 2,000 complaints and legal motions.

None of this is an accident. The State Department has been fixing the election since their candidate Torres lost in a landslide to current President Jimmy Morales in 2015.

The Obama-Biden administration installed a judicial dictatorship in Guatemala that exacerbated the lack of state presence in border areas and facilitated illegal migrants and narcotics. Able to jail political opponents without evidence and in violation of law, our embassy intimidated Guatemala’s legislative and executive branches to pass a 2016 electoral law favoring Torres’s National Unity of Hope party.

Likewise, the embassy reached into the TSE to control debates and political advertising. They canceled rival parties and illegally prevented other parties and candidates from participating.

Morales has remained silent, intimidated by the State Department, and Democrats. Torres, Guatemala’s next president if the embassy fraud is consummated, has adamantly insisted Morales make no deal with Trump. She was likely encouraged by the deep-state actors whose perfidy will be exposed and agenda killed, if Morales and Trump work together.

Trump cannot expect Morales to take the initiative. Trump must take control himself to get the safe-third-country agreement from Guatemala.

Trump should offer to immediately remove US Ambassador Luis Arreaga and sanction the TSE magistrates and three of the five high-court magistrates. Supported by Democrats, these officials have issued illegal political rulings violating Guatemalans’ human rights. Trump would signal to corrupt Guatemalan officials that the embassy cannot protect them and that US policy is against socialism in Guatemala.

Working with the embassy, Democrats have supported the illegitimate high court and opposed Morales as supposedly corrupt. They would fight against the safe-third-country agreement and accuse Trump of aiding corruption and repression.

This stance, however, would explode in their faces. Shining light on embassy actions and the Obama-Biden policy in Guatemala would expose Democrat claims as Orwellian falsehoods facilitating the socialist takeover of Guatemala.

Trump should support the legitimate requests of Guatemalans to repeat the June 16 election. An election free from embassy meddling would likely result in a government Trump could work with. It could also help Guatemalans recover their judiciary and criminal-justice system and bring law and order to rural areas.

Liberated from guerrilla-successor oppressors, Guatemalans would find more opportunity and less violence. Grateful inhabitants would cooperate with security forces, identify suspicious activity, and reduce the flow of illegal migrants and drugs. Add a safe-third-country agreement with the only land route to the United States, and Trump would checkmate Democrats on illegal immigration.