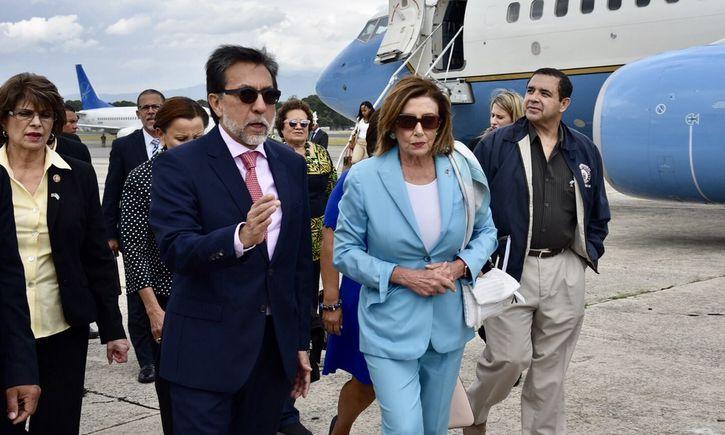 Speaker of the House Nancy Pelosi visited Guatemala yesterday and promoted the socialist candidate for president ahead of Sunday’s election. In what is set to be a tight contest, Pelosi put her thumb on the scale of Sunday’s results.

Pelosi snubbed conservative President Jimmy Morales who defeated a socialist candidate in the last election. She met only with socialists opposed to him and to President Donald Trump and his policies.

Pelosi’s opposition to new domestic-asylum rules shows her desire to flood the country with illegal migrants and portray Trump as an anti-migrant racist in the 2020 campaign. Her defense of asylum is a deception, since almost all those seeking asylum are economic migrants and not fleeing persecution.

She did not go to Guatemala to examine the asylum agreement. She already opposes it.

US Ambassador Luis Arreaga is also undermining Trump. He needs to be replaced immediately.  Arreaga coordinated Pelosi’s meeting with local socialists. They met with Helen Mack of the Myrna Mack Foundation, whom they call a human-rights activist. George Orwell would smile.

Judicial Watch has reported the Myrna Mack Foundation receives money from George Soros’s Open Society Foundations, as well as from USAID. Mack teamed up with the UN International Commission Against Impunity in Guatemala (CICIG) to accuse defense attorneys of corruption for representing defendants accused by the commission. Guatemala’s Bar Association issued an immediate condemnation of the attack on the constitutional right to a defense.

Photographs show Pelosi with leftist judges, as she promoted the socialist agenda in Guatemala.  Pelosi described the visit in a tweet as bipartisan, but her entire delegation was Democrats. It was only bipartisan if one thinks there is a difference between Democrats and socialists.

Such US actions would affect any president who depends on the support of his population. That will not apply to Sandra Torres. She has the support of tyrants: Nicolás Maduro of Venezuela and Daniel Ortega of Nicaragua. They depend on Cuban repression expertise. When she was first lady of Guatemala, her husband bestowed Guatemala’s highest honor on Fidel Castro.

Acting Homeland Security Secretary Kevin McAleenan has called Guatemala the choke point for illegal immigration. It’s the only land route from South and Central America to the United States. This underlines the importance of the asylum agreement to stem the flood of illegal immigrants arriving on the US-Mexico border.

The speaker of the US House of Representatives just traveled to Guatemala to undermine the agreement and support an avowed socialist. Perhaps this should be no surprise with the rise of the likes of Alexandria Ocasio-Cortez in her caucus.

However, the outcome of Sunday’s election could have a detrimental impact on the security of the US southern border. Torres will work to undo Trump’s and Morales’s agreement, and Pelosi just tried to prop up Torres in the eyes of Guatemala’s electorate.

Hopefully she will not succeed.