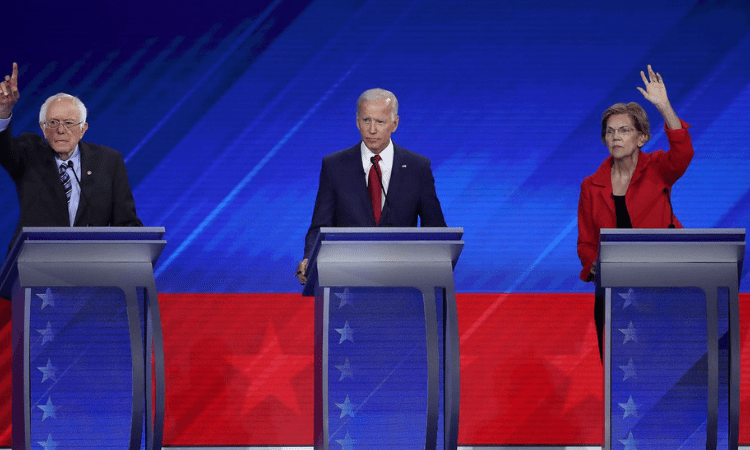 Biden portrays himself as a political moderate, but his support of socialism in Guatemala shows otherwise. (elementarty)

In the Democrat presidential debate on September 12, Biden said, “Comparing [Obama] to the president we have is outrageous… We didn’t lock people up in cages; we didn’t separate families; we didn’t do all of those things.”

Actually, they did. Leftists were outraged by a photo of children in cages on the border, which supposedly demonstrated President Donald Trump’s lack of humanity. To Democrat surprise but not shame, the photo was from 2014. Even CNN took Biden to task: “Both of Biden’s claims are false.”

The Obama-Biden policy, of supporting socialists abroad, drove those children to the cages in 2014. Its legacy still drives minors to make the perilous journey.

In January 2015, Biden wrote in a New York Times op-ed that “Mr. Obama had asked me to lead this new effort” in Central America. In a 2016 speech in Guatemala, Biden said Obama “commissioned me to come up with a plan for the region”—the Northern Triangle: Guatemala, El Salvador, and Honduras.

Biden’s plan embraced socialist political elements in the Americas. These organizations spawned from Fidel Castro’s America Department, which was created to spread Leninism across the region and foment revolutions.

The Obama-Biden administration reestablished diplomatic relations with Cuba that had been severed in 1961. The resulting flow of US tourists able to use credit cards in Cuba helped rescue the desperate, cash-starved Castro regime.

In 12 months between 2014 and 2015, Biden visited Guatemala three times. He publicly pressured its president to extend a UN anti-impunity commission (CICIG). The commission served as a US embassy tool to co-opt Guatemala’s judiciary and criminal-justice system in favor of the successors to Castro-supported insurgents.

Biden again traveled to Guatemala in January 2016 for the inauguration of its new president to assure the continuation of the UN commission. Although the CICIG mandate was set to expire in September 2017, the new president extended it to 2019. Biden said, “I spend so much time in matters relating to this area, my constituents are beginning to think that maybe I should run for office here.” He already was its de facto ruler.

In response to a debate question on slavery reparations, Biden spoke about the importance of record players at night to educate children. Then he turned to Latin America:

“You talk about the need to do something in Latin America. I’m the guy that came up with $740 million to see to it those three countries, in fact, change their system so people don’t have … to leave.”

Part of the $740 million Biden took from taxpayers was spent supporting groups Judicial Watch exposed as part of George Soros’s international efforts to spread collectivism: “The goal is to advance a radical globalist agenda through ‘lawfare’ and political subversion.”

As Judicial Watch notes in their report, Soros’s efforts in Latin America have led to socialists taking over countries. Among his victims are Bolivia, El Salvador, Nicaragua, and the disaster that is Venezuela.

In Guatemala, the subversive infrastructure Biden and Soros bolster with their millions wreaks havoc. It politicizes the judiciary and criminal-justice system, foments violence, stifles the economy, and leads to increased migration and suffering for children.

The president of the American Chamber of Commerce in Guatemala noted, “We are in a period of radical ideological movements by social-conflict groups, with distortions and open opposition to any investment project, that do not show they legitimately or democratically represent the communities. This has led to vandalism, damages, disturbances, illegal seizure of private property, and loss of life that puts the safety of citizens and the development of the country at risk.”

Biden showed pride about his sabotage in July’s Democrat debate. He claimed in Orwellian fashion he was “able to change the circumstances of why people fled in the first place,” even as the flow has grown to ever higher levels.

Biden portrays himself as a political moderate, but his support of socialism in Guatemala shows otherwise. His actions have damaged Latin America and the United States and directly contributed to the crisis on our border.