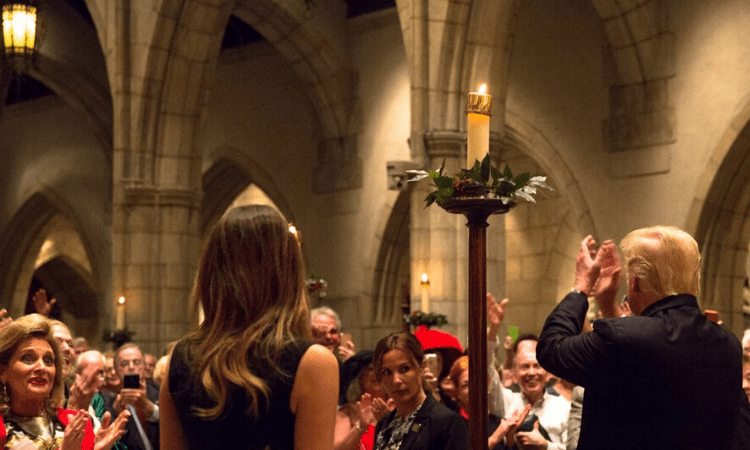 President Donald Trump and wife Melania are greeted by a standing ovation on their arrival to the Episcopal Church of Bethesda-by-the-sea in Palm Beach, Florida, on Christmas Eve. (Dan Scavino Jr.)

On January 3, President Donald Trump will speak in Miami at a Hispanic church to launch “Evangelicals for Trump.” His speech will be pivotal for people of faith because socialism is now mainstream in the Democratic Party; freedom of religion is at stake.

Potential Democratic presidential nominee Senator Bernie Sanders (I-VT) and his top cheerleader, Representative Alexandria Ocasio-Cortez (D-NY), have said their brand of socialism is unrelated to what Castro sponsored in Venezuela.

I am an American who has lived in Guatemala for more than 40 years. I saw firsthand the guerrillas financed by Castro morph into a political party. Their socialist presidential candidate made the final runoff in two consecutive elections.

This year, House Speaker Nancy Pelosi (D-CA) led a Democrat delegation to Guatemala, three days before the presidential runoff. It was a shameful display of support for the guerrilla and socialist candidate, who was fortunately still defeated.

Pastor Otilio López—a member of the board of directors of the Evangelical Alliance of Guatemala—says “Evangelicals strive to live productive lives while helping others and being at peace with God. Leftists fear us because they know we will resist them and not bend to their amorality. They try to infiltrate our organizations and deceive us. We won’t let it happen because of our principles and values.”

While López fights for religious freedom in Guatemala, Trump fights for us all by pushing back against socialism. In a speech in Florida in November 2019, Trump said, “to those who would try to impose the horrors of socialism on our country, I say again tonight, America will never be a socialist country, ever.”

Trump understands the threat socialism poses to religion because collectivism is inherently opposed to it. His audience of evangelical supporters in Florida is coming because they want to hear political leaders respect and defend their individual right to religious liberty and tolerance, which are under constant assault.

A notable example is the recent reaction to Supreme Court Justice Neil Gorsuch beginning a Fox News interview with “Merry Christmas.” Democrats, their media comrades, and other secularists called it inappropriate and political. Until recently, “Merry Christmas” was commonplace even among non-Christians. Now this cordial wish is politicized by those who would remove our liberty.

On Christmas Day, another of Trump’s potential opponents, Elizabeth Warren, took to Twitter.  Instead of wishing us happy holidays, she attacked the “Trump administration’s cruel treatment of immigrants and asylum-seekers” for family separation and the death of a child. The truth is the opposite: Democrats have abused children to defame Trump. By refusing to reform asylum laws, Democrats invited adults to take minors with them on the perilous journey through Mexico.

The 2020 election hinges on the battle between liberty and prosperity versus elitism and the road to serfdom. Despite their denials and spin, socialists and secularists have been attacking religion from many sides. The Obama administration was hostile to religious groups, especially with Obamacare. Trump has issued executive orders protecting religious freedom, including free speech, which shouldn’t be necessary but now are.

Socialism is amoral. It does whatever is necessary to take and keep power, including stifling faith. All power centers are socialism’s enemies, especially religion because it is based on principle, not expediency.

Socialists who profess belief in Christianity or Judaism claim the biblical mandate of caring for the less fortunate applies to government. That’s convenient for them but mistaken. The mandate is for individuals. Central government control harms any society where it is practiced and helps nobody but those who have political power.

In November, Trump will face the leader of a Democratic Party that has turned to socialism. His speech to Evangelicals should frighten his political opponents, especially in a state that has many who know too well what that means to their quality of life and faith.