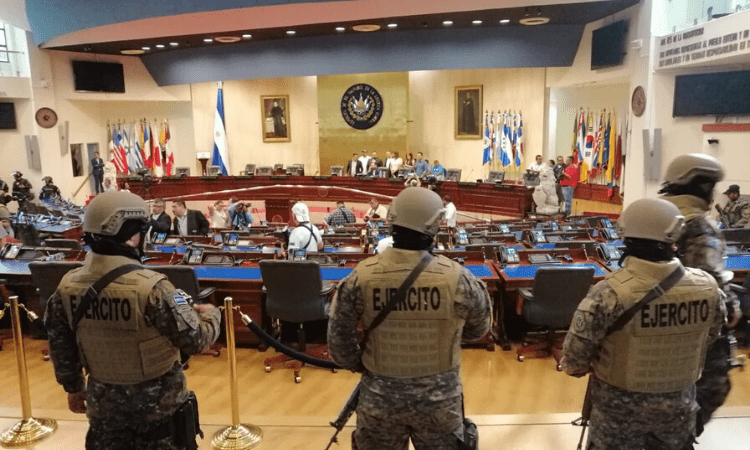 Violent crime has reduced significantly in El Salvador, one of the world’s most dangerous countries, since 38-year-old Nayib Bukele became president in June 2019. According to official figures, the country registered almost 1,000 fewer homicides last year than in 2018.

The Bukele administration argues the success is due to its Territorial Control Plan. This has increased control in prisons, blocked the financing of illicit activities, and strengthened security forces.

Then Congress intervened in 2020. Opposition lawmakers refused to approve a loan the Bukele administration needs to proceed with the third stage of its plan.

What has caused political turmoil in El Salvador?

In early February, Bukele asked the Salvadoran Congress to vote on a $109 million credit line from the Central American Bank for Economic Integration (BCIE). He invoked Article 167 of the Constitution—which allows the president to summon legislators for a special session under extreme circumstances—but lawmakers rejected his call, claiming it was unjustified.

Just 28 out of 84 legislators attended Congress on February 9, not enough to meet the legal quorum. A few hours later, Nayib Bukele entered the legislature followed by armed soldiers and police officers in riot gear. He presided over the session under dubious authority, held a prayer, and spoke before a crowd of supporters.

Bukele threatened to repeat the takeover if legislators did not approve the loan. Human Rights Watch, EU countries, and US lawmakers repudiated Bukele’s intimidation tactics.

Moreover, on February 10, the Salvadoran Supreme Court issued a ruling ordering Bukele to “refrain from using the armed forces in activities contrary to established constitutional purposes.” The US ambassador to El Salvador, Ronald Johnson, opposed the move as well, stressing the need to respect the rule of law and to keep the security forces out of politics.

The clash between the executive and legislative branches then escalated. On February 28, Bukele vetoed a bill that established reconciliation measures for the 1979-1992 Salvadoran civil war, arguing it provided de facto impunity for human-rights violators.

Then, on March 4, Bukele declared a state of emergency in Salvadoran prisons to crack down on gangs, even though such measures require judicial approval. On March 9, Bukele demanded again that lawmakers greenlight the $109 million loan, accusing them of blackmail.

For the moment, the CCP-virus pandemic has put the standoff on hold. Congress has unanimously approved the president’s request for emergency powers to shut the country’s borders, order businesses to close, and suspend civil liberties. On March 10, the Nationalist Republican Alliance (ARENA)—a conservative party with 44 percent of seats in Congress—changed its mind and announced it would approve the loan.

Who are the main actors in Nayib Bukele’s rise?

took office on June 1, 2019, and became the youngest president in Salvadoran history. He has portrayed himself as a tech-savvy outsider fighting corrupt, entrenched elites.

A law-school dropout and businessman, he launched his political career in 2011 with the Farabundo Martí National Liberation Front (FMLN), the country’s major left-wing party formed by ex-guerrillas. He successfully ran for mayor of Nuevo Cuscatlán in 2012 and of San Salvador, the capital city, in 2015. The FMLN leadership, however, expelled him in 2017 for disobeying party unity.

Bukele went on to found his own party, New Ideas, in August 2018. He was unable to run for president under it, as FMLN and ARENA legally blocked him. Therefore, he launched his bid with an established centrist party, the Grand Alliance for National Unity (GANA). He won with 53 percent of the votes and became the first president since the end of the civil war from a party other than FMLN and ARENA.

has presided over El Salvador’s Congress since November 2019. A legislator from the conservative National Coalition Party (PCN), he called Bukele’s actions on February 9 an attempted coup. Ponce also requested a legislative commission to investigate the incident.

is a veteran politician who has changed parties several times and is now supporting Bukele and New Ideas. He has been a prominent voice convening Salvadorans to protest against Congress and pressuring legislators to approve the loan.

What is the state of criminality in El Salvador?

According to the Salvadoran government, there were 2,383 homicides in 2019, a 28.7 percent reduction from 2018. The current murder rate is therefore 36 out of 100,000 inhabitants—a drop to 2003 lows. Vicious street and prison gangs carry out most murders and control the narcotics and human-smuggling trades.

Although the Bukele administration has claimed credit for the significant decrease in violent crime, experts have asserted it is too soon to tell. Indeed, the Salvadoran murder rate has been in a downward trend since 2015. Gang members have told the press that curbing murders in the first months of a new administration is their way of signaling they are open to negotiations—but that violence could resume if negotiations falter.

Last December, the Inter-American Commission on Human Rights (IACHR) released a report assessing the Salvadoran security system. Although the IACHR acknowledged the decrease in murders, it urged the government to improve the conditions of Salvadoran prisons, which are overcrowded, unhealthy, and lacking reintegration programs.

Which policies has the Bukele administration adopted to fight violence?

The Bukele administration’s flagship initiative aims to recover territories dominated by gangs. Rolled out in late June 2019, it focuses on 17 critical municipalities out of 262.

The plan has seven stages of implementation, but the Bukele administration has only described the first three:

The first two are already in process, with the third one pending the loan approval from Congress. According to the Salvadoran government, the three will cost $575 million by 2021.

Safe-Third-Country Agreement with the United States

On September 20, 2019, Bukele signed an agreement with US President Donald Trump to receive and resettle migrants seeking asylum in the United States.

The agreement includes funding to prepare facilities to receive up to 2,000 asylum-seekers. Betting on pragmatism to address Trump’s migration plans, Bukele views the program as a stepping stone for further cooperation on investment and security.

During a meeting with Bukele on July 21, 2019, US Secretary of State Mike Pompeo highlighted the importance of improving the Salvadoran economy, both to attract investors and reduce migration from Central America to the United States.

Following the lead of the UN Commission Against Impunity in Guatemala (CICIG), Bukele created a similar agency with the support of the Organization of American States (OAS) on September 6, 2019.

He tasked the CICIES, which started operations immediately, with “preventing, investigating, and punishing” acts of corruption and other related crimes in the 105 institutions that make up the executive branch. Any extended powers need congressional approval.

Judicial Watch and civil-society organizations in neighboring Guatemala have documented how the CICIG meddled in Guatemalan political affairs. Any country with weak institutions, such as El Salvador, can be a target for foreign agendas contrary to the rule of law.

What are the root causes for the insuperable Salvadoran violence and emigration?

El Salvador’s Defense Ministry estimates that 500,000 out of the 6.5 million inhabitants are directly involved with street gangs such as MS-13 and Barrio 18. With one out of three Salvadorans living in poverty and almost 40 percent of the workforce in underemployment, many youths turn to gangs to survive. Besides drug-trafficking, they run extensive extortion rackets that weigh on small and medium-sized firms.

The origin of the gang culture is tied to mass migration. During the civil war, many families moved to the United States, in particular to Los Angeles. Salvadoran teenagers there banded together to fend off other city gangs. When the civil war ended in the 1990s, US immigration policies led to the deportation of convicted gang members to El Salvador, where they reassembled.

After the civil war, El Salvador enjoyed 12 years of economic progress under three ARENA administrations. Between 1992 and 2004, poverty decreased, while competitiveness and investment increased. In the early 2000s, El Salvador signed a free-trade agreement with the United States and dollarized its economy.

Tony Saca, who presided over the fourth consecutive ARENA administration, became involved in a series of corruption scandals that led to his dismissal in 2009. ARENA lost credibility and citizens’ support, so FMLN presidential candidates Mauricio Funes and Salvador Sánchez Cerén won the following elections. A state-centered approach to economic development ensued. Unemployment rose to 7 percent, and foreign direct investment plummeted by 71 percent.

How does Bukele’s leadership impact democracy and accountability? Is he still popular?

Bukele has styled himself a social-media president, frequently using Twitter to share government decisions, communicate with officials, and even fire personnel. Citizens have embraced what they perceive as improved accountability.

He has stressed that El Salvador needs to tackle criminality at any costs, even going as far as to threaten to dissolve Congress. Disagreements with the opposition have revealed his tendency for authoritarianism and a savior complex.

Salvadorans continue to trust him, although his popularity has suffered slightly after his clash with Congress. A late February poll by La Prensa Gráfica found 85.9 percent of respondents approved his administration, while 10.4 percent rejected it. Before the turmoil, 90.4 percent supported Bukele and just 4.4 percent were against him.