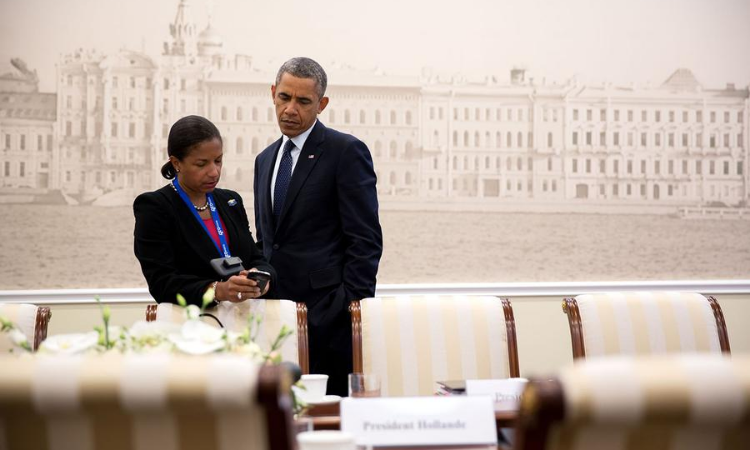 Rice is Obama’s most loyal lieutenant. (The White House)

Joe Biden’s campaign recently delayed his self-imposed August 1 deadline to announce his running mate. Biden’s handlers were under pressure from Senator Kamala Harris and Representative Karen Bass to name them. The Biden brain trust delayed the announcement so surrogates could discredit Harris and Bass. That opens the door for Obama’s choice: Susan Rice.

Former President Barack Obama, indispensable to the campaign, knows Biden lacks the cognitive skills to govern, and his tenure will likely be brief. Like four years ago, Democrats have convinced themselves President Donald Trump cannot win. For Obama, Biden’s running mate will be our next president. Obama must control that person to continue his socialist transformation of America and protect himself from exposure for undermining candidate and President Trump.

Handicappers and bettors pick Harris as the front-runner. They are wrong, not because of Biden, but because of Obama. He needs Biden to select someone he can control and trust. That is Rice.

If Harris or Bass were selected, they would want to manage the campaign and then not pass Obama the keys to the Oval Office. Their agendas may align, but either would demand control while Rice would continue as a reliable subservient partner.

For traditionalists, Rice’s drawbacks are that she has no base in the party, has never raised money, and has never held elective office. She is a policy wonk, not a politician. However, nothing about this election is traditional. Unable to defend Rice’s real credential—her loyalty to him—Obama has activated the Democrat attack machine. The establishment political left and the media are discrediting Rice’s opponents, without leaving his or Biden’s fingerprints on the murder weapon.

An example was how Obama and the Democrat establishment torpedoed self-proclaimed socialist Bernie Sanders. Their media partners suddenly focused on his socialism, leading other Democrats to bemoan his unelectability.

As chair of the Congressional Black Caucus, Bass cannot be so directly engaged. Instead of suffering attacks by Democrats, Bass appeared on Meet the Press and was promptly fed to the media sharks.

Host Chuck Todd blindsided Bass, “you sound a lot tougher on Castro now than you did when you described him as ‘comandante en jefe’ when he died.… You said you didn’t quite realize how sensitive folks were in South Florida about this … It still seemed as if you had a soft view of Castro.”

Todd may never be tougher on a Democrat guest, or have greater concerns about Castro.

Compare that to Rice’s treatment.

When Rice appeared on the July 5 Meet the Press, guest host Andrea Mitchell asked no hard questions. There was nothing about her lying to the American people on the very same program about Benghazi in 2012. There were also no challenges to the foreign-policy shortcomings of the Obama administration, including its embrace of Castro and Cuba.

After plugging Rice’s book in a fawning introduction, Mitchell teed up Rice to play the VP attack-dog role by asking her about a fake news story that Trump was purportedly allowing Russia to put bounties on US troops.

“The story of the Russian intelligence, the intelligence that Russia organized bounties for, to target American soldiers and coalition officers in Afghanistan. The president has now referred to this as a hoax. What message does that send to Vladimir Putin?”

There was quite a contrast between the appearances of Bass and Rice on America’s longest-running television program.

Harris does not have the political protection of Bass. Democrat establishment heavyweights, including past DNC chairmen, former Pennsylvania Governor Ed Rendell and former Connecticut Senator Chris Dodd, have taken direct shots at Harris.

Rendell went on CNN to say the ambitious Harris can “rub people the wrong way.” An anonymous source told Politico, Dodd felt Harris’s racial attack of Biden at a Democrat debate was a “gimmick” and “cheap” and chastised her for “having no remorse.”

How could Biden select either of them? Bass is an unelectable socialist. Harris is untrustworthy. Obama is pushing both aside in an organized hit.

Rice is Obama’s most loyal lieutenant. She proved it when she was the only senior administration official willing to go on all the Sunday shows in the shadow of Obama’s reelection day and lie about the deaths of four Americans in Benghazi.

Obama will be fully engaged in the campaign. He will harken back to the many important decisions he, Rice, and Biden made together and how Biden and Rice represent a return to normalcy.

Rice will be Biden’s running mate in November for what she hopes will be Obama’s third term.