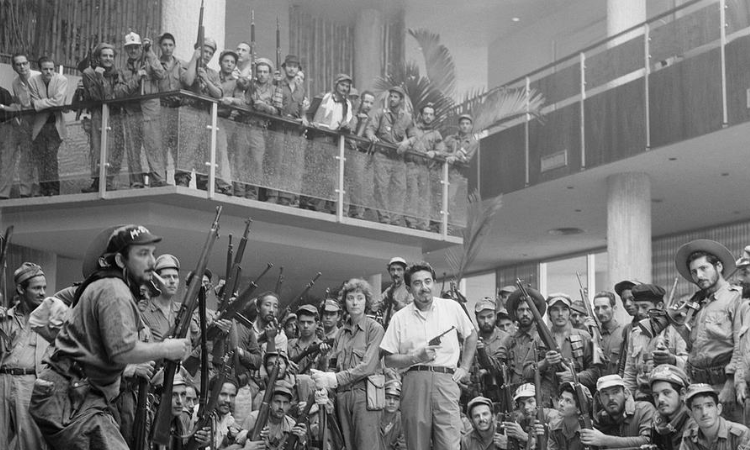 Autumn 1958. The rebellion was running forward quicker than anyone could believe. As rebel armies continued to make gains, Cuba’s economy, for the first time since Batista’s seizure of power, fully reflected the turmoil.

A fact largely unnoted had been the robust advance of Cuba’s economy even under the hated regime. But as collapse approached, uncertainty went sky-high and investment went through the floor.

Repression was tougher and more frightening than ever. It fell hardest in the cities. For every slain comrade that Fidel mourned in the Sierra Maestra, a dozen or more youngsters died in Havana police stations.

Félix’s father – ‘Félix’ being Adolfo’s underground name – had come to his limit. The old man, whose face had crumpled in grief when he sent his favorite son away to the US, now evicted him.

“If you are going to live here, then live here,” he told his younger boy. “But if you are using this place as a communist hideout I can’t allow that. It’s too dangerous, I won’t subject your mother to it, and I have to ask you to move somewhere else.”

Adolfo betook himself to the house of a communist friend, lodging there until el viejo broke down and told him: “Look, whatever the consequences, your mother and I would rather have you at home.”

On New Year’s Eve a discouraging piece of news reached the president from central Cuba. Santa Clara, the hub of the island’s rail, transport and communication networks, was facing a rebel assault and the army had gone AWOL. Divisions were scattering; commanders wouldn’t come to the phone. At 10 p.m. Batista called a meeting of his loyal partisans at Havana’s Columbia army barracks to bid farewell to 1958.

For most in the capital it was another New Year’s Eve. Félix stayed at home and went to bed early.

“Wake up, son.” It was the old man coming into his bedroom some time after midnight. “Batista is gone.”

“It’s true. He took his friends in a plane and a pile of cash in another plane.”

“To Santo Domingo, it seems. He left a junta under Cantillo in his place.” General Eulogio Cantillo had directed the previous summer’s failed campaign against the Rebel Army.

“Good! That junta should last about five minutes.”

“I give it ten,” the old man said with a shrug and went to the kitchen to make coffee.

Félix hurried to phone his Party contact, Otto Vilches. “Otto! Did you hear?”

Félix put down the phone in a fever of excitement. His father gave him a coffee. The old man was taking the news like business as usual: a leader going out, a leader coming in, another crank of history’s revolving door. Félix was tasting history for the first time – a taste as strong and sweet as the early morning brew that flowed over his tongue.

The lad jumped into his green Volkswagen Bug and steered it toward the center of action. At first the streets were mostly deserted but soon groups of people were riding around in trucks, calling out to each other, “¡Viva Cuba libre!”

How quickly the capital had fallen. Without a fight, without even a word, the old order had packed up and gone. Who would have guessed how easy it would be? On the streets, a carnival had materialized from out of a void.

Félix and his comrades had much to do. Everyone supported the rebels; no one doubted the junta would have to step down. But the moment was full of danger. From the other end of the island Fidel broadcast an urgent appeal to the people of Cuba, asking everyone to stay calm and raise no violence.

As the hours passed, gigantic events transpired. Officers of the regular army transferred command of Havana’s key fortresses to Castro’s main commanders; while in the name of the revolution, a squad of fighters from the old student Directorio seized the Presidential Palace which that group had failed to conquer less than two years before. Twenty-four hours after Batista’s flight, the rebels controlled Havana.

The only people to be alarmed, a far-from-negligible group, were those who had served Batista. Esbirros or henchmen – Cubans called them all by that name whether they were beat cops, army colonels or presidential ministers. Since the hour of victory, rebel soldiers (or people claiming to be rebel soldiers) had been looking for esbirros and summarily shooting them. Havana’s police had taken off their uniforms and gone into hiding.

At the main TV station Félix and his group demanded to go on air with a statement from the Socialist Youth. Without delay Félix was before the cameras and a moderator announcing: “This is a democratic, open TV station where even communists can speak.”[1]

Afterward Félix realized he hadn’t been home in several days. He was wrung out from exhaustion, in need of a bath and shave, so home he went.

“We haven’t seen you in four days and not a phone call!” la vieja told him.

The boy regarded her sullenly. We made a revolution and I still have to hear that shit.

His dad did not quite understand. Riverito’s friends in Batista’s cabinet had vanished overnight. Still – or so el viejo seemed to think – he had served a quarter-century at the Presidential Palace and he knew how to befriend people.

El viejo shook his head. It was beyond his reckoning that he might not make his way. As for revolutions, he’d been watching them since before the kid had been born.