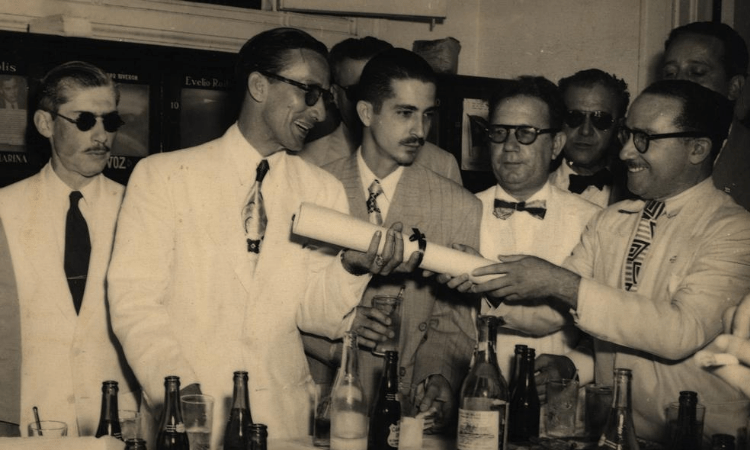 Riverito, second from left, receiving an award from fellow journalists at the Presidential Palace in Havana, 1951.

Havana, spring 1954. My brother and I didn’t see each other too often. Between his addiction to work, which we all knew, and his conspiring, which we took for granted, Emi was out of our sight for long periods of time.

One morning in April or May 1954 I had come back from the university and was in my room, reading a communist pamphlet on US companies in Cuba. As usual the arguments were solid, the figures objective, the conclusions distressing. Once more I had to ask myself: If the basic parts of our economy were held by American companies, then who owned the country? If the answer was “Americans,” as it surely must be, then how independent was Cuba? It seemed we were not a free country at all but still a colony.

In their political talk Cubans were saying: Batista is wrong, Batista is evil, we have to get rid of Batista. But if Cuba was owned by Americans, what difference would it make if someone else was president?

Almost nobody seemed to notice this problem. Many talked about “revolution.” Some were even willing to fight for it. Not many however could say what this “revolution” would do except get rid of Batista. The only ones who saw the problem in its actual size, who talked about changes that could matter, were the communists.

The question before me as I read that communist pamphlet was not its argument, which I knew to be valid, but rather its meaning for me. What would be my part in these coming changes? What could I do? What must I do?

Usually my father came to lunch at around one. That day for some reason he came earlier and with my brother. When they entered the house I was deep in thought. My room was very hot and I had put on the air conditioning.

“Workers of the world, unite!” Emi belted out as he walked in.

My brother’s manner often had the effect of putting me on edge. Even more, I inferred from his greeting that our mother was telling him about me. For months now she had been seeing Communist Party documents in my room and strongly disapproved.

I got up to greet Emi, leaving my pamphlet on the bed where I hoped he wouldn’t notice it.

He took off his watch and showed it to me. “A Movado; it’s new, solid gold. How do you like it?”

“It’s fine,” I said without enthusiasm.

“I’m wearing it so I can know the exact time of Batista’s downfall,” he said, giving voice to his obsession. Then he picked up the pamphlet I had dropped on the bed. “Trash,” he said and dropped it back.

“Not so, brother! Facts. Reality. The unfortunate truth.”

“I understand how a black man in a shantytown or a farm worker who cuts cane becomes a communist. But you. You!”

Yes! I, Adolfo Rivero, communist! It made all the sense in the world.

Emi smiled at his younger brother, speaking tenderly. “Look Adolfito, the Americans are not to blame for that. If you want to blame anyone, blame the Cubans who sold to them. American companies do business, not philanthropy. You might not like it but it’s hardly criminal.”

“Then the system is criminal for letting the rich always prevail!”

“That’s incorrect. Labor unions are very powerful in the United States, and here too.”

“Not alms. Good wages, living standards – everything they want.”

“No, not everything! Not by any means. Workers must control what they produce. They are the rightful masters of society!”

“What makes you say that?” Emi asked. “Workers have never ruled any society in history.”

“What about the Soviet Union?”

“The Soviet Union is ruled by the Communist Party.”

“And whom does the Party represent, if not the workers?”

“The Party represents itself. Its goal is to keep power for itself.”

“You and your friends are out for glory!” Adolfo charged. “You don’t care about changing society at all!”

“Changing society yes, by all means. But change within the rules of democracy. Freedom is the most important thing.”

“Freedom is a clever illusion,” Adolfo said dismissively. “What good is freedom without the possibility of change?”

“The communists don’t care about freedom – or perhaps they do. They hate freedom and would like to take it away.”

La vieja came into the room. “What is all this hollering?”

“Adolfito is the only one hollering,” Emi said calmly.

“Wash your hands,” la vieja said. “The table is being set.”

When the old man saw them coming, he put down his newspaper and went to sit at the head of the table.

Percy the cook overextended herself when Emi came, and Emi flattered her without remorse. “Old man,” Emi said to el viejo as Percy brought more food, “if I give you my car, would you allow Percy to come and work at my place?”

“I’m not interested in your car,” the old man said with a smile. “As for the rest, that’s Percy’s problem.”

“I’m very happy here,” the attractive mulatto girl said melodically. “If you are not satisfied at home, come to eat here more often.” She spoke like a member of the family.

“What was all that hollering?” el viejo asked.

“Nothing, a brotherly discussion,” Emi said. “It seems Adolfito is interested in communism. It’s become a fad at the university.”

“It is not a fad at the university! And I do not go in for fads or brands or watches or cars or anything of the kind!”

“Don’t brag about your lack of discrimination,” Emi said.

“I know all the leaders of the Communist Party,” the old man put in. “They’re friends of mine. They are more Cuban than communist, in my opinion.” He spoke nonchalantly, trying to nudge the matter away.

Emi looked at his brother’s plate. “That meal you are eating is not a proletarian meal.”

“Oh, my son,” la vieja broke in, telling Adolfo what her husband had not, “if the communists succeed here, we are going to have such a hunger!”