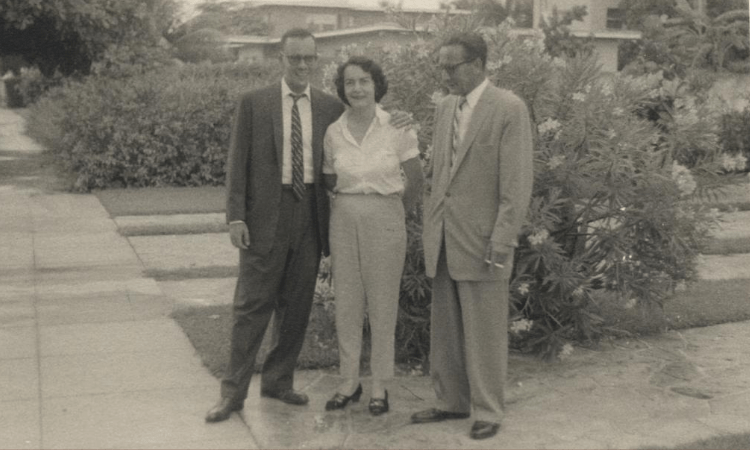 Miramar, Havana, in 1959: Adolfo, communist prince, at home with his parents. Tensions are plain to see on Riverito.

Havana, July 1959. Six months into the new regime, Emi Rivero was at his government law practice when fellow attorney Efrén Rodríguez came bursting into his office. Efrén’s handsome features, which gave him a Clark Gable look, were twisted in rage and colored like a beet. Efrén chucked his briefcase onto a chair and exclaimed as a Clark Gable character might: “Dammit, sir, this is communism!”

Though he didn’t know Efrén well, Emi understood the complaint perfectly. Fidel himself had promised that the bywords of the new regime would be democracy and constitutional rule. But now it seemed that Cuba was getting collectivism and one-man rule.

Emi was already in contact with veterans from the anti-Batista war who talked in low voices about taking up arms again. Emi had also encountered Efrén in the anti-Batista ranks, but the man was not a close acquaintance. For all Emi knew, Efrén might be part of the regime, working as a double agent. So Emi played safe and answered with a feint.

“Look Efrén, maybe Fidel is fooling around with the yanquis. Maybe he’s using the communists as a stalking horse to get concessions or win respect. When the revolution is secure, Fidel will have no more use for the communists and he’ll be able to push them out. The communists might not be as entrenched as they seem.”

“Good points,” Efrén replied. “But they don’t disprove what I said. Whatever he thinks he’s doing, the son of a whore is selling the revolution to Moscow. He’s betraying all of us!”

Emi shared those fears and badly hoped they were unfounded. He had started a new family and was making a happy life. If the res publica was going out of joint, he would be pulled into the battle and his sweet new life would be crossed.

He also had his parents to consider. He did not want to burden them with depressing stories at a time of their own suffering. By the summer of 1959 Riverito had lost his place in the world. And something worse: his favorite son, still living at home, had become a constant affliction.

Ever since the old ones had been together, la vieja had been the one to say: Let’s move, let’s find a new apartment, let’s build a new house. Now she decided they should move to America.

Why not go for six months or a year and wait for a change? Many acquaintances were leaving for the States. Delia was sure that the two of them, even without knowing English, would be safer and more welcome there than at home. They could come back when time had softened things, as in Cuba time always did.

La vieja put their belongings up for sale and placed their luxury home on the rental market. Then Emi got another jolt: a phone call from his mother, who was not one to raise alarms.

“I need you here,” she told him. “I’m having trouble with your father and your brother.”

“We have to sell the Volkswagen car.” It was the green Bug which Adolfo had all but turned into an honorary member of the Communist Party.

“Your brother is in an extremely bad mood about it.”

“Adolfito’s behavior is disturbing. Your father is afraid to go near him.”

“Afraid to go near him!”

“It isn’t like Rivers. He is actually frightened by your brother.”

She only called her husband Rivers when she was tense to the point of correctness.

“Come and take the car away.”

“Are the papers in the glove compartment? We need them for any sale.”

“Don’t worry about the papers. I just need the car out of here.”

Emi grabbed a taxi for the ride to the deluxe neighborhood of Miramar, sweating all the way.

The family was cracking apart. How could it be? No matter how or where they lived – and they had lived in many places – the four of them had always been a unit, as safe and secure as an old stone bridge. True, the old ones had their favorites; Emi had been his mother’s special preoccupation, while the old man’s love for his younger boy was operatic. But those gradations had only made the structure more solid and reliable. No matter the storms that raged against it, the old stone bridge would still be there, bright and resplendent when the sun came back. How many hurricanes had it seen and calmly forgotten?

Now things were different. At the house, Emi hardly registered who said what to whom. He only took the car keys from his mother and drove the Volkswagen away.

Thirty-plus years later, sitting in his brother’s apartment, Emi poured out his anguished memories of that day while Adolfo shrugged and said he didn’t remember a thing.