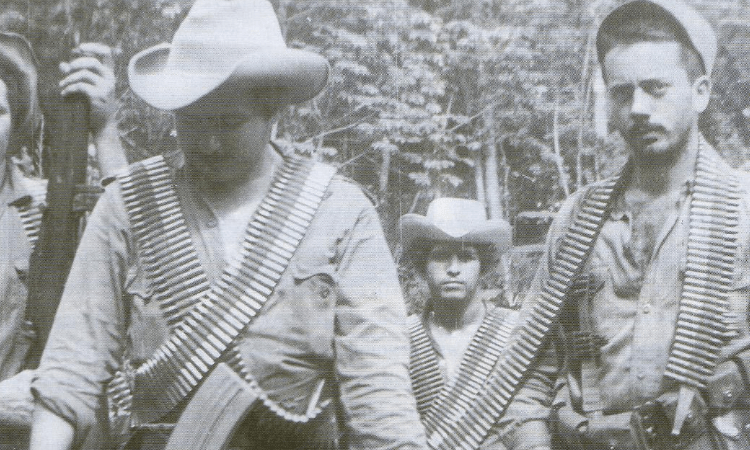 Cuba, Sierra del Escambray, early 1960s: anti-Castro guerrilla forces, very much like the ones with whom Emi and Plinio Prieto had worked. The guerrilla war against Castro in the Escambray went on for five years and was only suppressed at great cost to his regime.

By late October Plinio had organized his lines of supply in Havana, while Brand had obtained from his CIA contacts the promise of a weapons drop in the Escambray.

Plinio was ready to leave for the new hideout, which he had never seen and whose precise location he did not know. He was to travel to the center of the island and meet an escort who would lead him up to the camp.

Plinio’s wife Amparo shook her head. “Don’t say that! Neither one of you is going to die!”

Some days later, Brand was walking in Havana when he ran into another comrade who gave occasional help to him and Plinio. The other man pulled him aside.

“Bad news. Plinio, on his way to the hideout, was captured by militia.”

Brand went silent. Militia troops were the “armed people,” volunteers who went where the regime directed.

After a pause the other man said: “That’s not all. A weapons drop of 13 parachutes has also been captured.”

Now Brand had reason to talk to the Weird Sisters. What had gone wrong?

According to the best information that Brand later received, Plinio and his companion, on reaching the Escambray with their radio transmitter, couldn’t establish contact with their comrades who were already running from a large contingent of Rebel Army troops.

Plinio and his comrade joined up with another group of resistance fighters. They spent several days walking in the mountains with their heavy radio equipment. While sneaking across an agricultural cooperative, they encountered a squad of militia soldiers and traded fire with them.

Hiding in thick vegetation under cover of night, they tried to make radio contact with the US in order get the arms drop delayed; but their transmissions didn’t get through and the plane flew that night over the occupied campsite, dropping the arms into enemy hands.

The men broke into separate groups. Plinio and another man were taken prisoner in the town of Cumanayagua.

Other information came from the man arrested with Plinio. Apparently the police had picked up the two of them on a whim. As Plinio was shown into the squad car, police noticed his feet covered with blood. The prisoners were being held in a lockup when someone came into the station and exclaimed: “Hey! Do you know who that is?”

Plinio went on trial at once, the conclusion foregone. He was so cool in the face of his destiny – or so bored with the verbal rigmarole of the court – that he fell asleep in the middle of his own trial.

Sentenced to death and waiting to be shot, Plinio saw through the grille window of his cell door that one of the arresting officers had come to look at him. The visit was a pure act of cruelty; the policeman was invading a condemned man’s privacy to catch a glimpse of his unhappiness.

Seeing the policeman’s face in the door, Plinio began to whistle a popular tune, “Yo no soy monedita de oro para caerle bien a todos” – I am not a little gold coin to make everybody happy. The policeman, or so Plinio’s comrade later said, was mortified.

As important as Brand’s actions in Havana might be, they were not the crux of his strategy. The main action was to take a piece of ground in the center of the island, confound the government, raise confusion, give a pretext for outside forces to enter, and bring down the show.

With Plinio’s destruction the plan lay in ruins. Everything must be re-thought and built up again from scratch. That undertaking was not possible in Havana. Brand had to confer directly with J.B. in Washington.