Biden’s Socialism Is Killing His Florida Chances
Skip to content 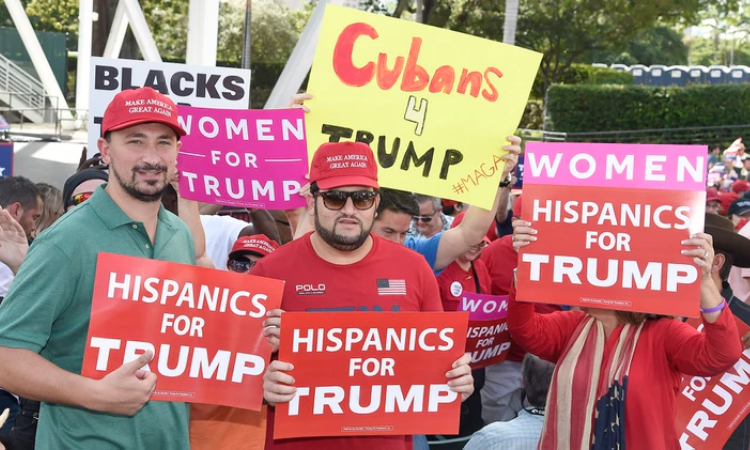 Every voter who escaped communism can see the signs in Biden's campaign. (Ricardo Robaina)

Biden traveled to the Sunshine State last week, for the first time in a year, to court Hispanics. The Democrat media had sounded the alarm that he was way behind Hillary Clinton’s 2016 numbers.

The first of three Politico articles in four days blared, “Biden Lags among Florida Hispanic Voters.” The Washington Post front-page, above-the-fold headline was “Why the Hispanic Vote in Florida Is Particularly Worrisome to Biden’s Campaign.” A Miami Herald headline said Biden was struggling with Miami Latinos.

Those media say Biden leads President Donald Trump by 17 points in Miami-Dade County, which “gives Democrats shivers” because Clinton carried the county by nearly 30 points. If the narrower margin holds and Trump does as well in the rest of the state as in 2016—he should do better because of his record—his Miami increase, attributable to Cuban Americans, will give Florida to Trump.

Biden’s team mistakenly sees this as a messaging issue, but it is substantive.

Americans of Cuban, Venezuelan, Nicaraguan, and other origins who have lived under socialism recognize Democrat promises: social justice, free healthcare and education. They were promoted by tyrants who brought disaster to the countries from which they fled. If the United States falls, there will be no place left in the world for anyone who wants to escape socialism.

Dividing societies is a classic Marxist tactic. Leftists have used race as a divisive tool since the days of the Black Panthers and Weather Underground. Today, well-meaning people support Black Lives Matter (BLM) without understanding that BLM leaders identify as trained Marxists. They use the racial-injustice theme to divide us and provoke violent confrontation in pursuit of power.

Every voter who fled communism can see the signs.

Bernie Sanders, who exercises a major influence on Biden, says the Democrat platform is the most progressive of any major party in history. Policies that were radical only four years ago are now mainstream. When Sanders said Biden was not paying sufficient attention to the base, he attacked Trump and absurdly blamed wildfires and hurricanes on Trump’s failure to confront climate change.

In response to his media partners’ panic regarding the state of his campaign in Florida, Biden did an interview with NBC Miami. Astoundingly, Biden said the “crackdown on Cubans by the regime has gotten worse under Trump.” In Biden’s delusion, that is Trump’s fault, not the dictatorship’s. Biden also contradicts himself because Cuban repression increased before former President Barack Obama’s 2016 visit, and it has not let up.

Biden told NBC that, if elected, he would restore his and Obama’s policies toward Cuba. They reversed the policies of 10 previous administrations and saved Castro’s regime from collapse by providing them badly needed hard currency. Biden would ease limits on remittances. That would help recipients, but it would benefit the regime by providing the cash it needs to survive. That translates to repressing the Cuban people and attacking free nations throughout the region.

Biden blamed the Venezuela disaster on Trump and claimed Trump had made dictator Nicolás Maduro stronger. In fact, Maduro survives from narcotrafficking Biden and Obama enabled. The chokepoint for illegal drugs to the United States is Guatemala. Acting as Obama’s point man, Biden empowered the successors to the Fidel Castro guerrillas who made and still make, Guatemala the unlocked backdoor that ensures Maduro’s survival.

Biden also courted Puerto Rican voters during his trip to Florida last week. While Puerto Ricans have never lived under socialism, Democrats cannot hide their intentions from victims of socialism. That, in a nutshell, is Biden’s Miami-Dade problem. After Biden’s trip, Politico reported Latino men are “underperforming” for Democrats.

The Democrat establishment united behind Biden to prevent front-runner Sanders from winning the nomination. They believed that, as a self-proclaimed socialist, Bernie would lose. After their 2016 experience, Biden’s handlers knew they needed full support from the Sanders faithful. That is why the Democrat platform is socialist and Kamala Harris, rated to the left of Sanders in the Senate, is Biden’s running mate.

Sanders and his comrade Alexandria Ocasio-Cortez are now managing Biden. This has erased any room to deny the campaign is socialist.

Biden recently asked in Pennsylvania, where he is also in trouble, “Do I look like a radical socialist?” Socialism is defined by policy, not looks. Their platform, the Democrat three-month silence on violence, and the pivot to blaming Trump for the violence send a clear message to Hispanics who have fled socialism. If it walks like a duck, swims like a duck, and quacks like a duck, it is a duck.

Socialism is a concern not just for Hispanics; it is for all Americans. We should take seriously the fear of Hispanics who have fled socialism and their warnings that Biden represents it. The signs are visible. We will lose our country if we elect him and his party.