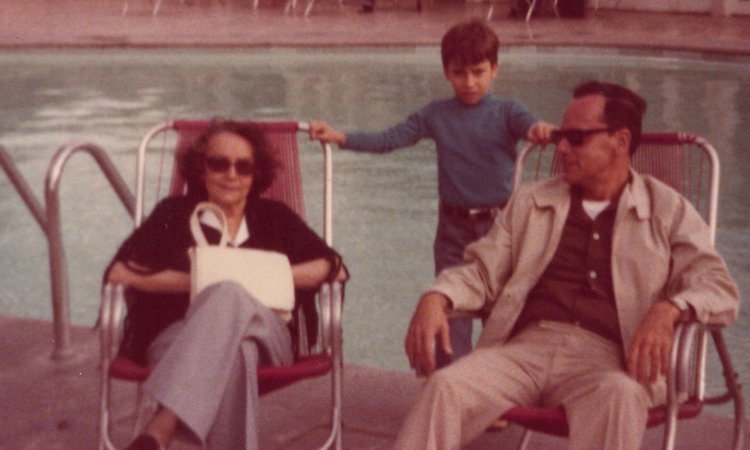 A visit from Mom: Delia, Alejandro, and Adolfo in early 1979.

Combinado del Este, Havana, 1979. Even more than opening the island to visitors from the Cuban-American community, a dramatic effect of the Carter-Castro diplomacy was that Cuba started giving early releases to political prisoners.

Among the prisoners designated for release were journalists. Emi Rivero was in that group, thanks to his Havana University diploma and thanks more to his cover story, the one he had given at his capture and kept up for 18 years.

When Emi saw his mother for the first time since his trial – touched by her youthfulness, only noting a raspiness in her voice – la vieja told him: “Make no mistake. You are going to be released.”

As 1979 went on, political detainees were being let out of the huge Combinado del Este prison at the rate of 100 or 200 per month. Emi understood his case would be difficult. Even if the regime felt cornered into acknowledging him as a journalist, he knew his captors were under no illusions.

What he didn’t know, and couldn’t yet know, was how decisively he had beaten them.

In September 1979 Emi was summoned for an interview with a G-2 officer. “In case the government has to release you,” the officer told him, “we don’t want to be forced to execute you first.”

Castro’s minions were not well advised to bluster to men like Emi and Adolfo. That threat of execution merely showed how weak the regime felt itself regarding Emi’s imprisonment.

The plain fact was that Emi had worn his captors out. In 18 years of confinement he had given them nothing; and he had shown himself ready to finish his term doing the same. He might die at their hands, but in death he would leave them no more than a sack of trouble. They would be smarter to use the diplomatic opening as a cover for losing him.

Another issue intervened. Apart from his family in the States, Emi also had a family in Cuba – his first wife Lizbet and their son Emilito. Their prison visits had become a mainstay of his. He well knew their desire to leave. He petitioned the authorities to let them go out with him.

Emilito was a talented engineer. The authorities didn’t want to lose him, too.

“If you do not let them leave,” Emi told his jailers nice and level, “I will not be able to put the Cuban case behind me because I will be thinking about them here.”

That was the incentive they needed. They issued passports for all three. Regarding Emi’s release, the official statement merely noted with a touch of pomp that Cuba had “no further use for the prisoner.”

In October 1979 Adolfo was able to tell his mother: “As I write these lines he has already been out a week. He’s almost forgotten his prison life; he’s not a man to live looking backward.

“He’s in extremely good form, physical and mental . . . What’s unavoidable, of course, is that he’s somewhat disconnected from reality. He’s like a diver coming out of water; he needs time to decompress . . .

“. . . Someone has to put into his head the notion that he is lacking in wickedness – or what used to be called ‘contact with reality.’ He needs a bit of healthy mistrust. As a reader, as a student, he has the experience of a sage. He is also finely honed as a warrior. But as a man of the street? In this respect he has less experience than his years . . .

“With his children he must not expect miracles. He will be dropping like a parachutist onto grown people who have made their lives without him. He will need tact and patience . . .

“He and I have talked plenty but of course not enough. A few hours of conversation cannot fill the vacuum of so many years. The surprising thing is how well we understand each other. In a way I’m not surprised. The experiences we’ve lived are different but complementary. I think that we are and will be essential for each other – irreplaceable – wherever life happens to take each one of us.”

At a moment during the eight days he stayed in Havana between exiting prison and leaving the island, Emi went into a “dollar store” and bought himself a watch. It was a pleasing accessory, and Adolfo took notice.

“What’s that watch?” he asked.

“They have a moral importance! They signify the right to choose!” Adolfo was full of emotion.

Their discussion of a quarter-century before had come full circle.

October 1979. After flying from Cuba to Costa Rica and then to Miami to see his family, Emi went to Washington DC, the city in which he would live.

His goal in the US capital was to work with policymakers who dealt with Cuban matters – especially those who concerned themselves with Cuba’s activities in Latin America. Cuba was working as an adjunct of the Soviet empire throughout Latin America and even in some countries of Africa. Emi could help the US in those matters while keeping his word to apply no force against Castro’s regime.

His first stop was the CIA in whose interests he had labored for nearly 20 years. The people with whom he had worked would be gone, but their successors would be waiting to see him.

First he was examined by a government doctor who couldn’t believe his instruments. Emi did not measure up like a man who had spent nearly twenty years in Castro’s dungeons. At 51 he was youthful and physically fit, with a bounding vitality.

When Emi asked about his debriefing, a young CIA staffer informed him that no debriefing would take place. Not to worry, the young man assured him; the CIA would issue a payment to cover all his years of back service, which came to a tidy sum.

To Emi it was old wine in a Coca-Cola bottle. Echoes from his early days with the agency went rushing between his temples. Americans throw money at difficult situations. As long as they give you money, they think they own you.

As in 1960 money was not the first of Emi concerns. His aim was to assist the US policy process; he wanted to put his knowledge and experience to their best possible use. The bad news facing him – very bad news – was that the people in Washington who had known him best would not be giving him that chance. They were buying him out.

The young staffer was ready with explanations. President Carter was in the process of re-making relations with Castro. This reform would have major benefits for the US, for Cuba, and for the hemisphere. America’s activities from the early 1960’s were now part of a discredited past. Any remnant of that old policy would stop up the works if it reappeared now.

Adolfo especially, in years to come, would have a riposte for that kind of argument: I guess it’s what you would call sophistication.