Why Obamagate Conspirators Must Face Justice
Skip to content 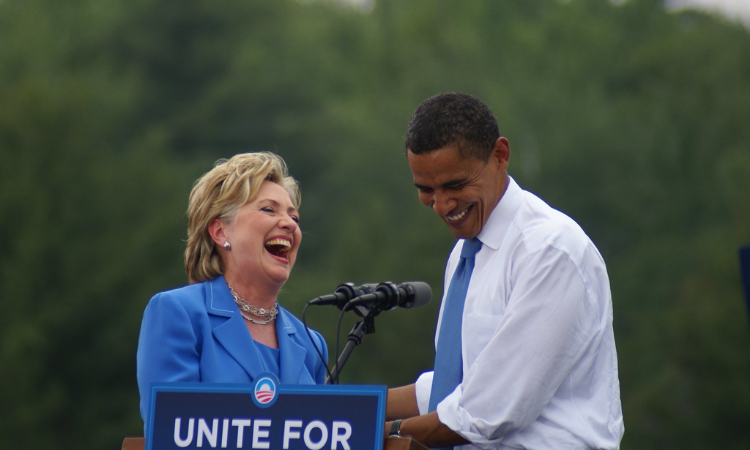 Instead of stopping Hillary Clinton's intent to create a scandal tying Trump to Russia, Barack Obama ran with it. (Marc Nozell)

President Donald Trump has called Obamagate—the abuse of government power to influence the 2016 election and then undermine Trump—the greatest scandal in American history. It is even worse than that. Our constitutional republic will not survive without a full airing of the events and accountability for those responsible.

Impunity for high-level government officials is the hallmark of Third-World countries. I have lived in Latin America since 1972, and I never thought I would see in the United States what I have seen here.

Recently declassified documents indicate that former President Barack Obama, former Vice President Joe Biden, and the highest officials in intelligence and law enforcement participated in Obamagate. Former CIA Director John Brennan briefed Obama and the FBI about Hillary Clinton’s intent to create a scandal tying Trump to Russia. Instead of stopping it, Brennan, Obama, the FBI, and high-level allies ran with it.

Permanent federal bureaucrats and various political appointees have obstructed congressional, executive, and Freedom of Information Act requests for documents to which they have every legal right. This delayed Justice Department investigations and prosecutions. This obstruction has deprived Americans of the information they need before the November 3 elections.

Democrats and their media partners have made great efforts to suppress knowledge and discussion of Obamagate. They fear the truth would expose and end their agenda and send many of their allies to prison.

Democrats are desperate to return to power and end the Durham investigations and prosecutions. Any letup to their obstruction of justice places them in danger, so they will do anything necessary to retain power in future elections.

An example is the McCloskeys in St. Louis. They have been indicted for legally defending themselves, while the criminal mob got a pass from prosecutor Kim Gardener. Higher courts are unlikely to let a conviction stand. However, a Supreme Court with judges like Emmett Sullivan and former Attorney General Eric Holder would uphold such convictions.

I have written and spoken publicly about Democrats imposing corrupt, arbitrary justice on Guatemala in the name of fighting corruption. Acting as Obama’s point man, Biden orchestrated the takeover of Guatemala’s criminal prosecution and judiciary. Some of Biden’s political adversaries have been in preventive detention for years without evidence, in violation of the law, and without trial.

The Public Prosecutor’s Office and the judiciary have protected successors to the Fidel Castro-supported guerrillas. They waged a decades-long war to overthrow the government and now terrorize rural populations. They are the same as Black Lives Matter and Antifa: Marxist groups attempting to dismantle the Constitution and install a one-party dictatorship.

The United States has always had healthy, robust political discourse, but the major parties have always accepted the rules—until now. Peaceful transfers of power depend on acceptance of the rules. Obamagate broke that centuries-old tradition.

Latin America is characterized by centralization and abuse of power. Outgoing administrations must be sure they will not face prosecution from their successors. Generally, an unwritten understanding has existed: steal and let steal. Entrenched corruption protects and perpetuates itself.

Some supposed conservatives either fail to understand the basics of a constitutional republic or are allies of the Democrat and media conspiracy to suppress the existence and importance of Obamagate. National Review’s Rich Lowry, for example, wrote “no one who is not already a Trump voter cares about dubious investigatory decisions from four years ago.”

Only a few public commentators understand the trap of not confronting a governing party’s abuse of power to perpetuate its control of government. This should be the key issue of the election. All others are secondary because there can be no prosperity without liberty, which requires the separation of powers and due process for individuals enshrined in the Constitution.

Democrats and their media partners promote identity politics—collectivism—which deprives individuals of their constitutional rights. Identity politics violates the presumption of innocence by, for example, automatically condemning any white police officer involved in an incident in which a black person is harmed. He gets labeled racist before anyone knows the facts.

The only way the public will ever know the truth about Obamagate is if the Justice Department investigates and prosecutes those for which the evidence is sufficient. The judiciary must also apply due process of law to those accused.

Electing Biden and Democrats will assure this does not happen. For that reason alone, we should reelect Trump and elect a Republican Congress.