Bernie Bros Do Dirty Work for Billionaires
Skip to content 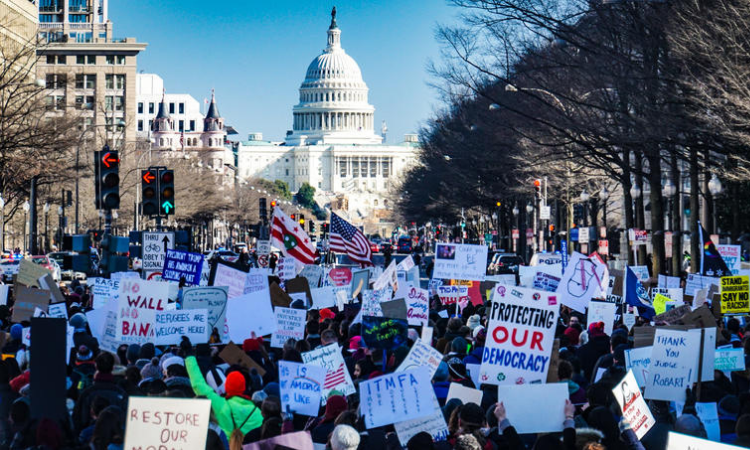 Naive defenders of socialism will also suffer under the totalitarianism they are helping to create. (Ted Eytan)

Billionaires are the primary target for animosity from Sen. Bernie Sanders (I-Vt.) and fanatical Bernie Bros. They’re working to defeat the one they loathe most: President Donald Trump.

Ironically, big-business billionaire support is indispensable for the socialists to prevail. Sanders’ followers are so idealistic and fanatical that they can’t see the contradiction between their contempt for billionaires and their dependence on them to defeat Trump.

They’re also blind to the contradiction between their socialist belief in economic equality and the billionaire agenda upon which they depend.

CNN, NBC and MSNBC, CBS, ABC, and the Washington Post all promote lies about Trump and suppress the truth about Joe Biden and Democrats. The partisans masquerading as journalists couldn’t do this without the support of their corporate owners—billionaires and big business. They are AT&T, Comcast, Viacom, Disney, and Jeff Bezos of Amazon.

The most egregious current example of the media bias is their suppression of Joe Biden’s alleged involvement in his son Hunter’s foreign business ventures. Evidence has emerged that Joe Biden may have violated his oath of office in exchange for money. The fake news ignores the story, and the billionaires at Twitter and Facebook both chipped in by censoring the New York Post.

Socialists, disconnected from reality, pursue their utopian dream of social justice and free health care and education. Meanwhile, billionaires want to maintain the protected status that provides them maximum profits and control. Though socialists and billionaires are in bed together against a common enemy, they’re in fundamental conflict.

The Democrat establishment stole the 2016 nomination from Sanders. They united against him again in 2020 for Biden because they calculated a self-declared socialist couldn’t win. Democrats don’t reject socialism, just the label.

Democrats partly attribute their 2016 loss to having alienated the Sanders faithful. To avoid a repeat, they’ve adopted Sanders’ socialist agenda in their platform and tapped Kamala Harris (D-Calif.), the only senator more progressive than Sanders, as Biden’s running mate.

The Sanders faithful don’t see, or want to see, the dependence of their backers on China and what this dirty relationship foretells.

China has been a mercantilist cash cow. Big business has excess profits there from essentially slave labor—the result of totalitarianism. Firms partnering with China have been able to export products back to the United States with little or no duty, while China has practiced protectionism against the United States. Our large companies have successfully lobbied several administrations on behalf of China, until Trump and his awareness of the problem. That’s why those in bed with China must defeat him.

The big-business model has exported U.S. jobs to China and other countries, where labor is worse than exploited. Despite former President Barack Obama’s claim that manufacturing jobs will never return, they have under Trump. The combination of corporate tax cuts, fewer regulations, and reciprocal trade deals has brought jobs—including in manufacturing—back to the United States.

Sanders faithful, who profess to defend workers, fail to understand that Biden will re-export those jobs and worse. Democrats call for open borders, for decriminalizing crossing into our country without documents or permission. The flood of many millions of immigrants would destroy the working-class wages.

Democrat politicos would then abandon any pretense of representing the working class and instead depend on votes of new migrants to remain in power.

The socialists and billionaires ignore history. After gaining power, totalitarians must consolidate and maintain it through repression. Examples include Russia after 1917, Germany after 1933, China after 1949, Cuba after 1959, and Venezuela after 1998.

The utopias of those who supported these movements never came to be—only misery. Each new movement claims, as do Sanders and his comrade Alexandria Ocasio-Cortez, its dream is pure and unlike the previous attempts at forcing equality through government coercion.

Too many billionaires in the United States fail to realize they owe their success more to U.S. free enterprise than to their intelligence, grit, and good luck. Arrogance could be their downfall. They’re now unleashing the forces of totalitarianism by using Bernie’s socialist army of followers to remove Trump.

If Biden prevails, the billionaires will find they’re unable to return the genie to the bottle once socialists are in power. They would ultimately lose their assets and control.

Naive socialist supporters also suffer under the totalitarianism they’re working to create. The defense against totalitarianism is to responsibly adhere to our Declaration of Independence and Constitution.

Our system of Creator-granted individual rights—which can only be abridged through due process within separation of powers and limited government—makes us unique in history. We should not discard it for greed and impossible dreams. The billionaires and socialists need Trump and his supporters to protect them from themselves.