Florida’s Hispanics Are Vanguards against Tyranny
Skip to content 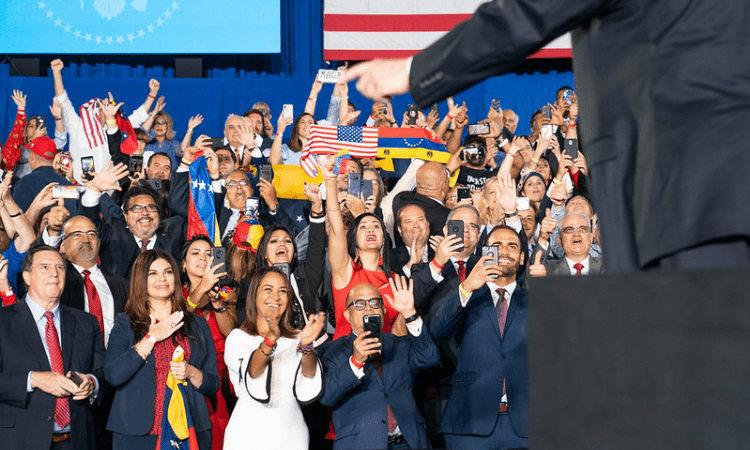 Florida’s Hispanics recognized socialism and delivered a decisive electoral victory to President Donald Trump. Unfortunately, an insufficient number of Americans outside Florida understood the true nature of the Democrats to overcome rampant ballot fraud in urban areas of other battleground states. We shall see what comes of the legal battle.

The cabal of globalists, their corporate media, deep-state actors, and Democrats have used classic Marxist techniques against our democratic republic: false promises of social justice and free education and healthcare with a side of polarization through demonization, violence, chaos, and fraud.

Many Hispanics recognize and understand this from their countries of origin.

That change extended to two congressional races. In the 27th district, Republican Maria Elvira Salazar defeated incumbent Donna Shalala, a former Clinton cabinet secretary and president of the University of Miami. Trump lost there to Clinton by 20 points and to Biden by 3. In the 26th district, incumbent Democrat Debbie Mucarsel-Powell lost by 4 points to Republican Carlos Gimenez, despite outspending him three to one. Trump beat Biden by 6 points there compared to a 16-point loss to Clinton.

Democrat leaders such as Representative Alexandria Ocasio Cortez (D-NY) call for compiling lists of Trump supporters to punish them. Hispanics of Cuban, Venezuelan, and Nicaraguan descent recognize this as familiar totalitarianism. Other citizens should reject it as well as un-American.

Democrat kingmakers are focused exclusively on getting what they want regardless of the cost. Many well-meaning Democrats fail to see the threat to themselves from their own party.

If Democrats were to control the presidency and the Congress, they would execute what their leaders have called for. They would eliminate the filibuster and increase the number of Supreme Court justices. The combination of politicized criminal prosecution and the judiciary would guarantee one-party arbitrary rule and destroy democracy.

If the president’s legal challenges are unsuccessful, our only defense against this would be for Republicans to keep their Senate majority by winning the two runoff races in Georgia on January 5. Senator Marco Rubio (R-FL) understands the imperative for a chance to defeat totalitarianism and has already begun campaigning for senators David Perdue and Kelly Loeffler. Rubio noted in a tweet that Loeffler opponent Raphael Warnock hosted Fidel Castro for a speech in New York which ended with singing the socialist hymn, “The International.”

Rubio is a valuable asset for Republicans. Like other Floridians, he understands the Marxist threat and can educate other Americans.

With Senate control, Republicans will oppose radicals, stymie radical legislation, and conduct investigations. This would give Republicans a chance to recover the House in 2022 and the White House in 2024. Aside from the damage that proven Biden corruption and disastrous foreign policy would inflict on us, we would still face Democrat electoral fraud, further facilitated by control of the executive branch.

The time to fight totalitarianism and stand for founding principle is now. Republicans must stand with Trump. Before signing the Declaration of Independence, Ben Franklin said, “We must … all hang together or … we shall all hang separately.”

We must make clear to Democrats that the only way they and we keep our democratic republic is transparency in the election. Unlike totalitarian Democrats in 2016, we can accept a Biden presidency, as we did Obama’s, if we can see he legally won.

Our founders fought a revolution because they were denied participation in governing themselves. Disenfranchising the 72 million Americans who voted for Trump violates our founding principles. We would lose our liberty.

The country owes much to Florida Hispanics. Had Biden won Florida, where it was more difficult to commit fraud, they would not have needed to harvest votes in the middle of the night in other battleground states’ big cities. That evident fraud should motivate us to do what Hispanics are doing: opposing totalitarianism and supporting freedom.

Democrats and their media partners have portrayed Republican gains among Florida Hispanics as a messaging issue to overcome. It is more than that. It is a fundamental problem for Democrats. They call for changes in the party without understanding the only effective change would be to eliminate totalitarianism from their party agenda. That would be healthy for the entire country and could make them competitive in Florida again.