Liberty, Prosperity Depend on Georgia Election
Skip to content 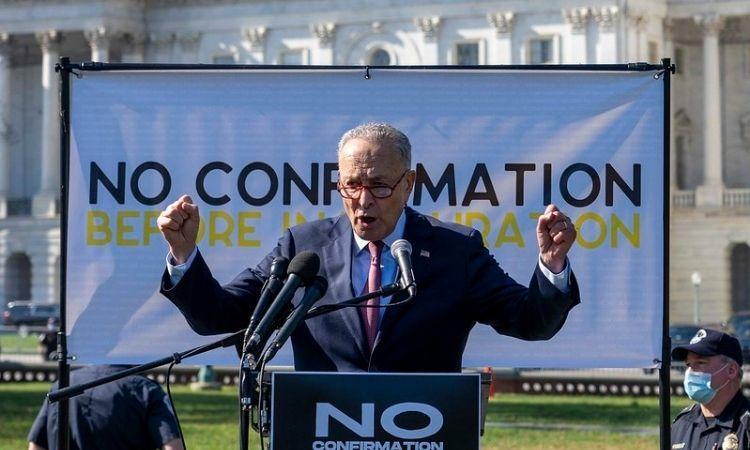 Schumer is perhaps afraid of a primary challenge to his Senate seat in 2022 from Alexandria Ocasio Cortez. (Senate Democrats)

On January 5, Georgia voters will determine whether the United States has rule by the people, as the founders intended, or rule by the elites. With Joe Biden as president, Chuck Schumer as Senate majority leader, and Nancy Pelosi as House speaker, the Constitution would fade into history.

Schumer is perhaps afraid of a primary challenge to his Senate seat in 2022 from Alexandria Ocasio Cortez. He took to the streets of New York City after election day and proclaimed, “Now we take Georgia. Then we change the world.”

Democrat packing of the Supreme Court would be certain. Schumer’s top deputy, Dick Durbin, said last week, “There clearly has to be a balancing of the courts.… We are all pitching in in every way imaginable to help the two candidates down there.”

They must be stopped.

If Trump fails to overcome the fraud against him last month and not gain a second term, he needs a Republican Senate to protect him from certain Democrat persecution. The Senate could also safeguard his chances of success in a potential 2024 run.

The country and the world also need a Republican Senate to prevent Democrats from imposing totalitarianism. Their desired one-party government would end the constitutional republic. A Republican Senate can block the Democrats’ radical agenda and expose them with the oversight responsibility that includes subpoena power.

To do this Republicans must stay united now.

Marco Rubio’s Cuban heritage gives him insight into the totalitarian Democrats. He was the first Republican senator to travel to Georgia and campaign for the GOP ticket in the runoff.  “This is literally … the showdown of all showdowns in terms of politics and what it means,” Rubio said at a campaign stop in Georgia.

Politico reports 70 percent of Republican voters do not believe the election was free and fair.

Republicans are under pressure by fake news, big tech, and socialists to demand Trump concede the election. RINO senators such as Mitt Romney were quick to abandon the president.

If Trump supporters were to feel Republican senators had abandoned Trump, they might sit out the Georgia election and give Senate control to the Democrats. It does not help that attorney Lin Wood, referring to lack of Republican support, tweeted, “If not fixed, I will NOT vote in GA runoff. Will you?”

This is self-destructive and must not become a narrative with Republicans.

Donald Trump Jr. is leading a PAC for the Georgia special election. The PAC has an ad running this week saying his father is on the January 5 ballot. Trump Jr. is right.

Democrats, deep staters, and cronies will see Trump as the Republican leader even if he is out of office. The Biden administration, born of corruption, and corrupt New York authorities will pursue criminal charges against Trump. He will also face multiple civil suits.

Trump is uniquely qualified by his wealth and business and government experience to endure the pressure of multiple court cases against him. In normal circumstances, Trump could prevail and win the presidency in 2024. These are not normal circumstances.

Prosecutions of Trump would almost surely fail under the current system, but persecution would be a better description for the new Democrat system. A packed Supreme Court would rule against Trump regardless of the law.

Large business interests—cronies—oppose Trump because of his America-first policy. It clashes with their globalist policy that exploits cheap foreign labor at the expense of US workers. Socialists call for worker prosperity but under collectivist largess instead of individual empowerment.

The cronies and socialists understand four more years of Trump’s America-first policies would set them back for generations. Desperate to keep their power and pursue their follies, the criminal alliance committed multi-faceted fraud. To have a President Biden, they must suppress the evidence and intimidate the courts and state legislators. To preserve liberty, prosperity, and US values, Trump must expose the fraud. For this, he needs Republican support.

Some pundits have posited that Democrat control of the presidency and Congress would give Republicans the best chance to win in 2022 and 2024. This makes sense in traditional terms, but we are no longer living in the traditional order. Democrats know their policies will prevent them from winning free elections.

Having won by fraud now, they will double down on those efforts, augmented by their control of the federal government. Republicans would not win another presidential election because Democrat fraud would prevent them from doing so.

The fate of Senate Republicans, Trump, and the country are inextricably linked. Republicans should support Trump’s efforts to overturn the fraud, and Trump should campaign aggressively in Georgia. He is coming to the Peach State this weekend, and he would best return several times before January 5.