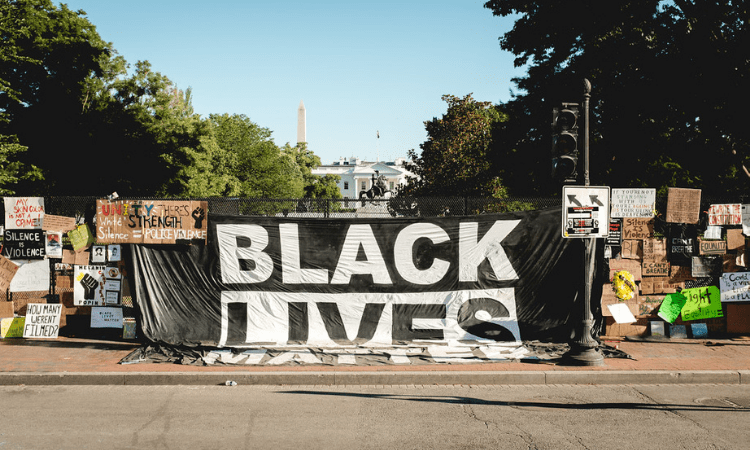 The US government is openly supporting Black Lives Matter (BLM), a communist organization, by authorizing US embassies to fly the BLM flag. “We are trained Marxists,” said BLM founder Patrisse Cullors in 2015. Cullors was referring to herself and cofounder Alicia Garza, whose inspiration Joanne Chesimard fled to Cuba to escape a life sentence for killing a policeman.

After Fidel Castro died, BLM proclaimed: “There is an overwhelming sense of loss … we must … come to the defense of El Comandante … as we aspire to build a world rooted in a vision of freedom and the peace that only comes with justice.”

Marxists substituted racial conflict for class conflict as their core strategy. Two-thirds of Americans supported BLM a year ago believing it promoted racial justice. It does not. BLM uses the false narrative of systemic racism in typical Marxist fashion: to divide the country and erode its principles. Critical race theory (CRT) is racist and incompatible with American founding values.

President Joe Biden confirmed his use of race to divide us in his June 1 remarks in Tulsa. Biden’s boilerplate language of healing contradicts his repeated assertions of the false Marxist narrative of systemic racism and his regime’s embrace of racist CRT. Biden did not mention Martin Luther King Jr.’s inspirational invocation of the Declaration of Independence and the Constitution.

King insisted: “Now is the time to make justice a reality for all of God’s children.” Americans listened, and race relations improved dramatically. Many black leaders now affirm this. Marxists ignore any facts that impede their goals.

The Biden regime’s major policies all fit a classic Marxist assault. Out-of-control spending and debt; the halted Keystone pipeline; limited fossil-fuel exploration and production; and increased regulations combine to harm the economy. Imposing CRT on the military and claiming to expunge extremists—those who reject the politicization of the military—are attempts to make it loyal to the government instead of the Constitution.

Mayhem at Home and Abroad

Democrat mayors, governors, and political prosecutors have permitted BLM and Antifa riots and hamstrung police, demoralizing and defunding them and creating insecurity for citizens. Sanctuary cities add to insecurity. Using the Justice Department, the FBI, and Homeland Security to pursue political enemies and protect political allies is a typical Marxist tactic employed throughout Latin America, including by the State Department and Democrats. I have written extensively about this occurring in Guatemala.

The Biden regime is purposely flooding the country with illegal immigrants by simultaneously both pulling and pushing them to the United States. This creates more crime and insecurity, and it provides a way to change the country’s demographics to help Democrats win elections.

Most Democrats and other facilitators of this destruction are likely unaware it will also remove their own freedom. They are Lenin’s useful idiots. Those of us who oppose socialism, though, also have to raise our awareness. We need to recognize our lack of readiness for this Marxist assault on our liberty.

Contrast the Biden regime’s BLM validation and claims of championing racial justice with how BLM hero Castro treated blacks. CNN has reported a group of 60 prominent black intellectuals and artists, including Princeton University Professor Cornel West, detested the treatment of people of African descent in Cuba. They signed a 2009 declaration: “We cannot sit idly by and allow for decent, peaceful, and dedicated civil-rights activists in Cuba, and the black population as a whole, to be treated with callous disregard.”

Cuba’s communist regime persecutes religious people, including blacks. While arresting a couple in 2020, Cuba’s religious police shouted obscenities about God and that their only God was Fidel Castro. Similarly, the Biden regime does not care about oppressed people or black people. They use them to promote imposing one-party, centralized, arbitrary rule.

What Equality of Outcomes Really Means

Equity is the regime’s new term for equality of outcomes: communism. Its proponents believe equity is achievable through government coercion, which has led to devastation wherever it has been attempted. Nature makes it impossible to achieve, and we lack the Creator’s power to change nature.

Biden’s regime pays lip service to religious freedom because an admission of hostility to religion is politically inconvenient. However, the truth is manifest: the regime promotes false expediency over principles in its destructive, futile attempt to change the Creator’s laws. Proponents of equity always oppose religion because it is an alternative to state authority.

People who cherish liberty must spread the word and organize on local and national levels. They must insist their state and federal representatives support timeless biblical principles and values and increase the difficulty of election fraud.

The Need for Electoral Rebuke

Unprincipled people managing the Biden regime’s Marxist strategy have no limits. Knowing their policies will guarantee Democrats’ electoral defeat, those running the government behind the scenes try to steal elections.

In Tulsa, Biden compared the “we shall overcome” motto of the 1960s civil-rights movement with Democrats’ false narrative of voter suppression today. He insisted SR-1, the so-called For the People Act, become law so blacks can vote. The legislation, which would weaken voter-ID laws, should be called the Democrat Fraud License Act.

The preservation of our natural rights, which contradict communist dogma, requires free elections. The Biden regime fears electoral security and transparency because that would allow us to reclaim our government and uphold the rights passed on to us by our founders.