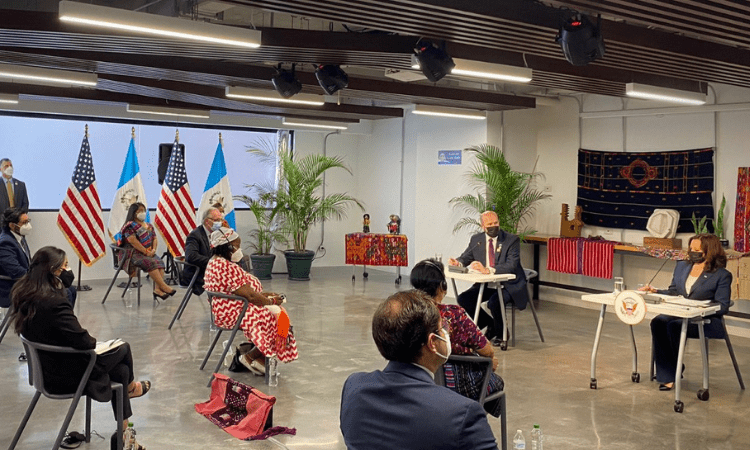 Harris has zero experience with foreign policy and follows Biden’s team of socialists. (US Embassy Guatemala)

Kamala Harris’s visit to Guatemala last week backfired on the Biden regime. While Harris pretends to address the root causes of irregular migration, she might fool followers of corrupt legacy media but not Guatemalans. They greeted Harris by telling her not to impose criminal socialists on them that would push more people to the United States.

Harris has zero experience with foreign policy. She follows Biden’s team of socialists, whose goal is to impose on Guatemala the successors to the Fidel Castro-supported guerrillas. Biden and his team began this when he was Obama’s point man in the region.

The boogeyman the socialists use to divide Americans and persecute their political opposition is racism. In Guatemala, the boogeyman is corruption.

Biden leveraged US money to extend the criminal UN anti-impunity commission in Guatemala. The US embassy used the commission to take over Guatemala’s judiciary and criminal prosecution. Biden’s corrupt judges and prosecutors exacerbated unemployment and violence and assured no state presence in border areas, a smuggler’s dream.

Biden got away with this in 2015 and 2016 because Guatemalans did not foresee the United States imposing criminality on them. When Biden’s magistrates finished their tenure this year, Guatemala’s authorities resisted US intimidation and named non-socialist magistrates for the Constitutional Court’s new term. The new magistrates have begun to correctly apply the law, beginning to reverse a large backlog of Biden’s magistrates’ illegal rulings.

US Attorney General Merrick Garland announced on June 7, the day Harris was in Guatemala, the establishment of the Joint Task Force Alpha. This is a partnership with the Department of Homeland Security “to address … both corruption [and] transnational human smuggling and trafficking networks … in Mexico and the Northern Triangle [NT] countries of Guatemala, El Salvador, and Honduras.” If the Biden regime wanted to target human smugglers, it would not have undone former President Donald Trump’s arrangements with the four countries. These had substantially reduced smugglers’ opportunities.

Also on June 7, the White House published Harris’s statement about a Justice Department anti-corruption task force with “support from the Department of State.” It singles out Guatemala and includes “mentoring … [Guatemala’s] Special Prosecutor Against Impunity (FECI).”

State Department Special Envoy to the NT Ricardo Zuniga had previously mentioned working through the Treasury Department to use the Global Magnitsky Act against individuals. Congress created this legislation to sanction individuals responsible for extrajudicial killings, torture, or other violations of internationally recognized human rights or acts of “significant corruption.”

The Biden regime, its congressional allies, and its corrupt legacy-media partners claim resistance to the imposition of political judges and prosecutors means Guatemala has succumbed to corruption. In other words, corruption to the Biden regime is anyone who stands in its way. The regime will attempt to misuse Magnitsky sanctions to persecute political enemies.

Having lost control of the Constitutional Court, the last vestige of Biden’s socialist control in Guatemala is the FECI. Juan Francisco Sandoval, the FECI chief, enjoys open Biden support despite multiple criminal accusations against him.

Guatemala lost $388 million in the infamous Odebrecht scandal. Other victim countries have recovered money, but not Guatemala because of Sandoval. Guatemala’s solicitor general filed a criminal complaint against Sandoval, but it has not moved because of US support for Sandoval.

Sandoval is the tip of the socialist spear that Biden’s people are aiming at Guatemala’s heart. Everything else Harris speaks about regarding the NT and Mexico is to disguise the Biden regime’s real goal: finish the socialist conquest of Guatemala. He and his comrades began this during his tenure as vice president. This would push more illegal immigrants into the United States, but the Democrat Party is glad to receive them.

In a June 9 Tom Lantos Commission on Human Rights hearing, Representative James McGovern (D-MA) commented that there are difficult conditions for applying Magnitsky sanctions. The process is rigorous and far from arbitrary, which suggests that Treasury officials still have American standards. The State and Justice departments, on the other hand, will try hard to weaken those standards to accommodate Biden regime socialists.

Guatemalans recognize this false narrative of demonization that Marxists use to justify political repression. Biden’s people in Guatemala jail political opponents in gross violation of their constitutional rights and the law. Both the regime’s words and actions lead Guatemalans to foresee attempts to arbitrarily apply Magnitsky sanctions to political enemies in Guatemala.

If Guatemalans successfully resist US imposition and the US system withstands Biden’s assault on it, Guatemala will have a chance at economic development. That would mean less irregular immigration into the United States than if Harris were to succeed in her current efforts.