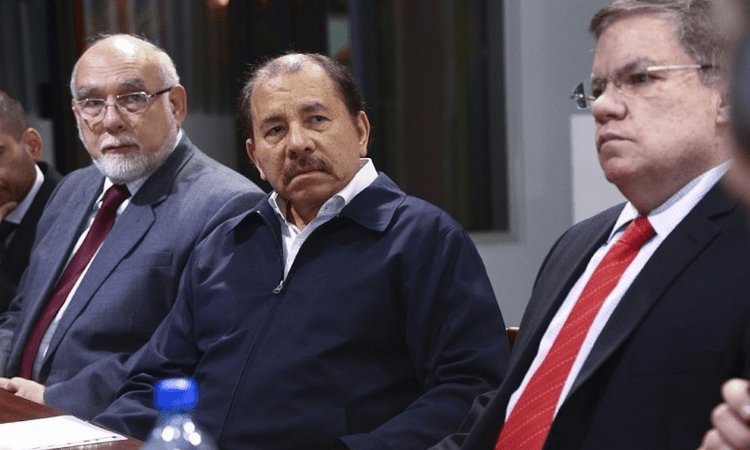 Once a key ally of Daniel Ortega, Nicaragua’s largest business union—the Superior Council for Private Enterprise (COSEP)—has now become another one of the regime’s many political targets. Ortega and his wife, Vice President Rosario Murillo, have turned their backs on COSEP leaders, suffocating their companies with arbitrary law enforcement and arrests.

In 2007, the then recently elected Ortega invited COSEP leaders to a national ruling coalition. Businessmen had a say in economic policymaking, occupied government posts, and suggested reforms. However, the agreement was limited to economic affairs, and business leaders kept mum on thorny topics such as democracy and institutionality.

During the agreement’s lifespan, COSEP was the main driver of economic policies. From 2008 to 2017, the union successfully had 124 laws passed and got 40 appointments at government jobs.

When criticized by independent media, COSEP President José Arregui wrote op-eds defending the achievements of the corporatist “COSEP model.” Sister organizations such as the AmCham lobbied on behalf of Ortega in Washington, DC.

On the surface, the Nicaraguan economy and foreign direct investment boomed. Ortega struck trade agreements with several countries, including the United States. During that decade, the poverty rate halved, public services improved, and more job opportunities elevated the quality of life nationwide.

The hidden origin of the bonanza, however, was the $600 million worth of annual funding from Venezuela. As they did with ideological brethren across Latin America and the Caribbean, Hugo Chávez and Nicolás Maduro bankrolled Ortega’s rise. When the Venezuelan economy tanked, Ortega tapped into another source of foreign funds: China.

Such funds allowed his regime to roll out infrastructure projects and keep COSEP contractors happy while building up its own network of crony firms.

The passing of those laws sparked social turmoil and a political crisis. On April 19, COSEP demanded the Nicaraguan police stop repressing and torturing protesters. Given the abuse of power continued unabated, COSEP convened for a peaceful march a week later, thus publicly breaking with the regime.

The Family Steps In

Ortega had set up companies for his family across several industries, creating channels to divert funds for personal enrichment. Between 2008 and 2017, Albanisa—a joint venture between the Venezuelan state oil company PDVSA and its counterpart in Nicaragua, Petronic—channeled $4 billion to the Ortega regime. Besides funding social programs and infrastructure projects, the money funded Albanisa’s growth.

In less than a decade, Albanisa became a conglomerate with a presence in finance, construction, energy, tourism, and more. Rafael Ortega, son of the Nicaraguan president, manages these businesses along with relatives and close friends. Once the Ortega family had secured their own firms to do business with the Nicaraguan state, the regime was ready to discard COSEP.

Indeed, most of Ortega’s children are presidential advisors, manage the nation’s oil supply, and run the largest TV channels and marketing companies. According to an investigation by the journalists network Connectas, they earned $936,000 only in 2018 and 2019 from several contracts with the Nicaraguan state.

However, there is a thin line between firms owned by the Ortega family, the ruling Sandinista party, and the government.

For instance, the Ortega family was behind the acquisition of DNP in 2009 with funds from Albanisa and the national rural cooperative Cajaruna. Up until 2016, Venezuela provided $3.7 billion worth of cheap oil to DNP.

In December 2019, the US government imposed sanctions on DNP due to its corrupt ties to the Ortega family. DNP then transferred its profits to Zanzíbar Investments, another company controlled by Ortega’s son.

To further evade US sanctions, the Nicaraguan regime passed a law to nationalize DNP.

In June and July 2021, the Ortega regime launched its most blatant attack. It began jailing any presidential candidate who posed a serious threat to its continuity. Former COSEP President José Aguerri and banker Luis Rivas were among those arbitrarily arrested. By imprisoning respected business leaders and intimidating others, Ortega has waged an open war against his former allies.

The business community, however, is in a much more precarious situation to resist than when the political crisis began. Laws aimed at crippling private firms have taken their toll.

In March 2019, Congress passed a tax reform aiming to collect $300 million that accelerated the undercapitalization of private companies, the loss of competitiveness in agriculture, and productive stagnation.

In a similar vein, Congress passed a so-called consumer-protection law in February 2021. COSEP argued it would cause international banks to sever ties with Nicaragua and isolate its financial sector. The law has affected industries such as commerce, tourism, imports, and agriculture.

Nicaragua’s GDP has been tanking for three consecutive years, and the underground economy is eating up the formal one, with 70 percent of the workforce holding informal jobs in 2021. Over 3,000 businesses have closed and around 200,000 formal jobs have vanished since 2018.

In the United States, political pressure is growing for the Biden administration to suspend the free-trade agreement with Nicaragua, a move that would devastate the Central American economy.