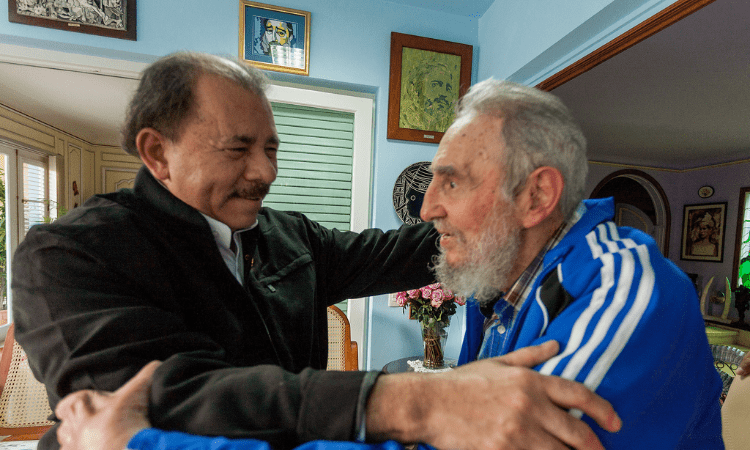 Ortega was laying the groundwork to throw the full weight of the state against dissidents. (Cubadebate)

Daniel Ortega of Nicaragua has taken his mask off: the president-turned-dictator is now blatantly using the state’s repressive apparatus to steal the upcoming election.

In June and July 2021, Ortega arrested more than 20 individuals and froze their bank accounts. Six of them were planning to compete with him for the Nicaraguan presidency in November. Others were part of opposition movements.

In a similar vein, the Ortega regime is waging an open war with the country’s business elite, once a close ally.

What caused the recent wave of arrests?

The self-preservation instinct of Ortega’s crony regime increased after the 2018 social unrest and protests. Back then, the Nicaraguan police arrested over 800 people and started persecuting opposition leaders and young activists.

Soon, a giant surveillance machine emerged, made up not only of government officials but also of citizens across the country willing to snitch on critics. The Ortega regime cracked down on independent journalists and enacted barriers to media outlets until many of them shut down.

In December 2020, the Sandinista-controlled National Assembly passed three laws giving Ortega wide-ranging powers under the excuse of fighting fake news, foreign meddling, terrorism, and money laundering. Ortega was laying the groundwork to throw the full weight of the state against dissidents.

This year, when the electoral authority announced the presidential election would take place on November 7, Ortega, who has been in power since 2007, launched his attack. Prosecutors and judges loyal to Ortega began using these laws and other pretexts to arrest candidates and pave the way for his fourth reelection.

Who is currently in prison?

In most cases, the Ortega regime has not shared where it is holding the political prisoners, and not even their families have access to them. There is certainty only about the most prominent cases of Cristiana Chamorro and Violeta Granera, who are under house arrest.

Has the political repression impacted the economy?

Between 2007 and 2017, Ortega enjoyed the support of the country’s business elite gathered in COSEP. To garner their support, Ortega allowed business leaders to decide on the national economic matters.

The regime marketed Nicaragua as an investment destination, and foreign companies constructed factories. During that decade, the economy grew on average by 5 percent annually.

The relationship with COSEP went south when it asked the regime to stop repressing protesters in 2018. This year’s detention of José Aguerri and Luis Rivas, two respected business leaders, was the straw that broke the camel’s back.

Ortega turned Albanisa into a conglomerate present in finance, energy and gas, construction, travel, and other industries. He put his relatives and closest allies in charge of these businesses to profit from regime privileges and expand market share.

Since the 2018 protests and subsequent political turmoil, 3,000 businesses have shut down, and over 142,000 formal jobs have disappeared.

The pandemic, as well as the Iota and Eta hurricanes, compounded the economic malaise in 2020: GDP shrunk by 2.5 percent. Further, authoritarianism and corruption have undermined entrepreneurship and paved the way for the consolidation of Ortega’s family businesses.

The Nicaraguan economist Abelardo Medina believes Ortega will keep his tight grip on the country. “Without a high-level trigger, there will be no change in the short run. [The regime’s] instability impedes economic growth, because investors stop coming here.”

Will Nicaragua be the next source of mass migration in Latin American?

The Ortega regime has turned Nicaragua into a country with dwindling economic opportunities and fewer rights for common citizens. Therefore, incentives to migrate are increasing.

Indeed, Nicaraguans have crowded migration offices this year. In the first week of June, the government issued 2,080 passports. The number jumped to 3,074 in the second week and then to 3,136 the following week.

A February 2021 poll conducted by Cid Gallup revealed two thirds of Nicaraguans, mostly young people, would move to the United States, Canada, or Spain if they had the chance.