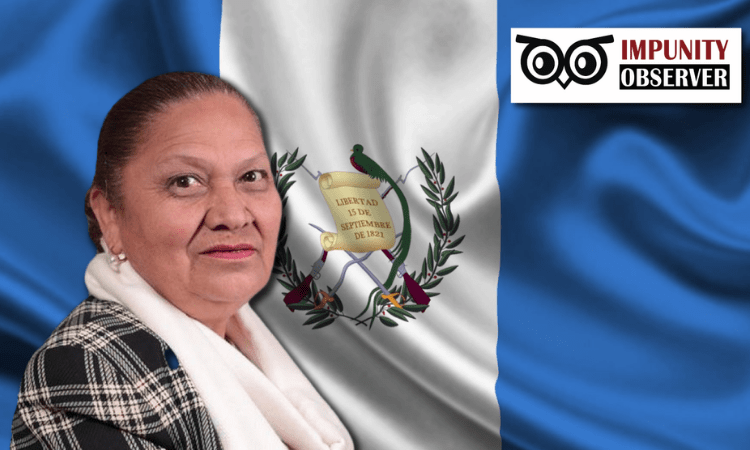 “We are a sovereign and independent country,” Porras told the Impunity Observer.

Despite enjoying relative economic freedom and a strategic geopolitical location, Guatemala has struggled to boost its economy and satisfy its citizens’ basic needs. Its Achilles’ heel has been a weak judiciary and an incipient rule of law.

Rather than strengthening Guatemala’s courts, the US Department of State (DOS) and its foreign allies, including the United Nations and Sweden, have sought to weaken them. They have interfered in local prosecution and the appointment of key government posts, undermining the credibility of the country’s institutions.

On September 20, 2021, the DOS imposed sanctions on two Guatemalan officials: Attorney General Consuelo Porras and Ángel Pineda, secretary general of the Attorney General’s Office. They cannot enter the United States and are on the Engel List of individuals the DOS deems to be “significantly corrupt.”

In an exclusive interview with the Impunity Observer, Attorney General María Consuelo Porras argued the DOS and its allies are engaging in a campaign to discredit her office: “They are blocking justice in Guatemala,” presumably to have themselves in control, along with a select few progressive allies.

The Man behind the Sanctions

These sanctions are the DOS’s reaction to Porras’s decision to remove Juan Francisco Sandoval from the special branch against impunity (FECI). The DOS had already suspended anticorruption aid to Guatemala and issued a briefing condemning the dismissal of Sandoval.

Campesino organizations such as CUC and CODECA have publicly rejected Sandoval’s dismissal and organized road blockades to try to have him reinstated. They claim Sandoval has stood up to corruption, whereas the attorney general’s office argues he violated due process and issued biased rulings.

Sandoval, a fugitive who fled the country immediately after his removal, became the head of the FECI in 2015, during Thelma Aldana’s tenure as attorney general. Like Sandoval, she is also in exile in the United States, evading an arrest warrant.

Among his alleged transgressions as prosecutor, Sandoval usurped the role of the solicitor general in the Odebrecht bribery case. He also supported the transnational effort to jail the Bitkov family, a victim of Russian political persecution in Guatemala.

We stand with the people of Guatemala and with Prosecutor Juan Francisco Sandoval, whom I recognized this year with an Anticorruption Champion Award. His dismissal undermines the rule of law and strengthens the forces of impunity. Guatemalans deserve better.

“We are a sovereign and independent country,” Porras told the Impunity Observer. “Particularly, the Attorney General’s Office is an autonomous and independent institution governed by the Guatemalan constitution and laws, and we do not need to pay attention to what one or another country seeks.”

She stressed that it is the DOS, not the entire US government, that seeks to delegitimize her actions. Other US agencies have even conferred awards for her office’s track record.

In February 2020, Joseph D. Brown, the US attorney for the eastern district of Texas, granted Porras an award due to her “commitment to justice and cooperation in joint criminal investigations.” The same month, the Justice Department praised her collaboration to apprehend and extradite transnational crime suspects and combat human trafficking.

The Drug Enforcement Administration also recognized her support in June 2021. Miguel Madrigal, assistant regional director for Central America, gave Porras a certificate of appreciation for her “dedication and effort helping to fight drug trafficking in Guatemala and support of big DEA investigations.”

Regarding US sanctions and aid cuts, Porras explains the DOS has not cared to find out the reasons for Sandoval’s dismissal. These extreme measures not only affect her but the country’s capacity to engage in criminal prosecution.

During the interview, Porras said she had issued two diplomatic requests to clarify the reasons for Sandoval’s dismissal. The DOS has ignored them and stood firm on its unilateral decision.

“Justice is an institutional matter, not a one-person affair,” Porras said. Under her lead, she argued, “the Attorney General’s Office has followed due process and strengthened the rule of law.”

Contrary to negative media portrayals, Porras said her office has achieved historic goals. Whereas, previously, prosecution offices were available in a few regions of the country only, now there is a nationwide presence, with 373 across the territory. Moreover, during her administration, 1.5 million cases have been solved, some of which had been pending for years.

“When our administration began,” Porras explained to the Impunity Observer, “the Attorney General’s Office had around 1.3 million pending cases. That is impunity.”

Her administration started prioritizing complaints of violence against children and women. Her leadership has also managed to improve the institution’s annual caseload processing threefold.

For Porras, “the reason why efficiency was so low in the prior decade is that groups [who now protest against her] had taken over the justice system.” Although they aim to delegitimize her work with misinformation through outlets such as the Venezuela-funded Telesur, Porras trusts her work will speak for itself and eventually vindicate her.

Moreover, with the newly created prosecution branch specialized on property forfeiture, trespass, migration, and transnational crime, her office will be better suited to guarantee property rights and the conditions for economic development.