How US Taxpayers Fund Roadblockers in Guatemala
Skip to content 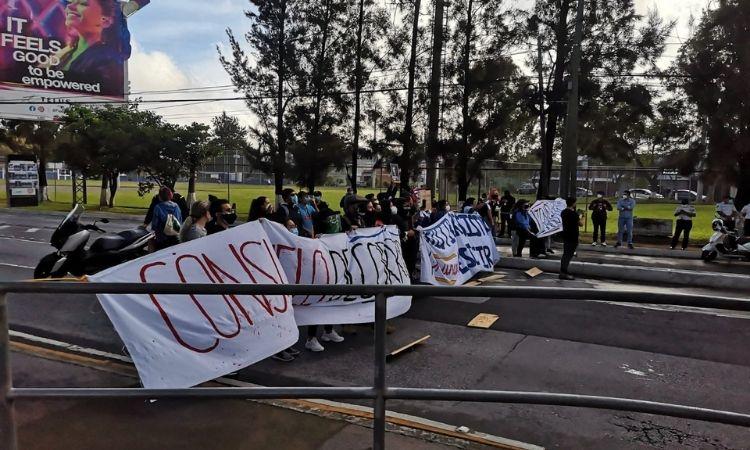 The road blockades are harming workers the most amid the pandemic. (Claudia Jo-Ríos)

Since late July, 2021, activists and nonprofits led by the Peasant Development Committee (CODECA) have been blocking Guatemalan roads to demand the resignation of President Alejandro Giammattei and Attorney General Consuelo Porras.

Some of them receive funds from the US Agency for International Development (USAID), thus engaging in actions that flout USAID’s stated goal of promoting “democracy, economic growth, education, and health” in Guatemala.

The road blockades, however, are harming workers the most amid the pandemic, to the tune of 3 million quetzales (US$380,000) per day in lost income for merchants and street vendors.

Why are peasant organizations protesting?

Protesters claim the Giammattei administration is trying to cover up its own corruption. On July 23, 2021, Porras dismissed Juan Francisco Sandoval, who for six years led the attorney general’s special branch against impunity (FECI), prosecuting over 200 people, including former presidents and vice presidents, government officials, and businessmen.

Sandoval, who filed an injunction against his dismissal and fled to the United States, alleging persecution, said that Porras fired him because he was investigating corruption involving Giammattei. On August 24, in a New York Times report, Sandoval accused the president of receiving bribes from a Russian mining company.

It is not the first time Sandoval gets involved in controversy. In the Odebrecht corruption case, he usurped the role of the solicitor general and was part of the transnational alliance that persecuted and jailed the Russian Bitkov family in Guatemala.

Sandoval argued Porras dismissed him illegally and arbitrarily without providing evidence of his faults or offenses. While the Supreme Court has asked Porras for more information on her decision, she has already assigned José Rafael Curruchinche, former prosecutor of electoral crimes, as the new FECI head.

Who is Juan Francisco Sandoval and why is he important to them?

When he left office, Sandoval was investigating over 100 corruption cases involving businessmen, former justice officials, and public servants. Local media, nonprofits, and progressive movements supported Sandoval and argued his dismissal is a move by Giammattei and Porras, who are supposedly part of a criminal network. The protesters blocking roads are demanding Sandoval’s return and the resignation of the president and the attorney general.

Sandoval, however, has been a critical piece to impose progressive allies on Guatemala’s government through lawfare. He helped some candidates to the Constitutional Court (CC) by filing illegal criminal charges against others in a bid to remove competitors. The CC has the last word on judicial matters in Guatemala.

A clear example has been his constant confrontation with candidates proposed by the Guatemalan Bar Association. He has issued arrest orders against winning CC magistrates twice, in September 2020 and in March 2021.

Further, the nonprofit Foundation Against Terrorism has filed 15 criminal complaints against Sandoval in numerous cases.

Despite this and other irregularities, the US Department of State (DOS) gave Sandoval an award for his anticorruption work in February 2021. After his dismissal, the DOS and President Joe Biden condemned Porras’s action and reduced US cooperation with Guatemala.

Some of the civil and indigenous organizations that are participating in road blockades have received financial support from the DOS or USAID in projects related to transparency, rural development, and human rights. Although their impact remains unknown, Sandoval means a cash flow assurance for them.

Writing for newspaper Prensa Libre, José Molina, president of Guatemala’s palm growers union, Sandoval’s dismissal is a pretext to create social disruption. As it occurred in Ecuador, Chile, Perú, and Colombia, radical left organizations take the streets to destabilize governments and undermine the image of institutions.

Which are the organizations promoting road blockades?

Two organizations are leading the blockades and national strikes: CODECA and 48 Cantones. Other peasant and indigenous communities, student movements, and professional unions have joined them.

CODECA is a peasant organization created in 1992 to improve rural work conditions and development. However, it has been the subject of over 400 criminal complaints for trespassing, stealing energy, and extorting peasants. CODECA allegedly steals 250 million quetzales’ (US$32.3 million) worth of electricity per year and resells it to rural residents.

CODECA has received funds from the governments of Norway, Sweden, Spain, and the United States. In 2010, despite its overtly political mission, the Inter-American Foundation, the US federal agency to promote community-led development in the region, provided CODECA with a $134,890 grant. In 2016, CODECA also received a grant from Front Line Defenders, a human-rights nonprofit financed by George Soros’s Open Society Foundations.

48 Cantones is an indigenous organization located in the Guatemalan municipality of Totonicapán. It has no official registration and claims to follow ancient Mayan law. In effect, 48 Cantones has become a parallel local government in its community.

In 2011, the USAID supported a project through Rainforest Alliance to preserve 22,000 hectares of forest in the Guatemalan highlands. Although USAID expected to reduce migration with this project by creating ideal conditions and new jobs, 48 Cantones as a rule does not pay collaborators and claims all work is voluntary.

What other organizations have received USAID funds?

The USAID has worked in Guatemala for more than a decade, either supporting initiatives of international organizations or providing funds to local nonprofits. In 2019, the USAID announced a new collaboration approach to integrate the perspective of indigenous communities, paving the way for more recipients.

According to the 2021 White House fact sheet on US cooperation with Guatemala, the USAID works with Guatemalan governmental agencies and private service providers Destino Desarrollos, Agro Atlantic, and InterBanco.

In total, the USAID has channeled $101.4 million to Guatemala so far in 2021 and $94 million in 2020. The top three sectors with the largest spending are government and civil-society projects, operating expenses, and agricultural projects.

In addition to CODECA and 48 Cantones, the USAID has supported the following organizations:

Most of these organizations are either actively participating in or publicly back the road blockades. Further, CODECA, FAFG, the Myrna Mack Foundation, and FUNDAECO have also received support from Open Society Foundations.