The New Honduran President’s Eyes for China
Skip to content 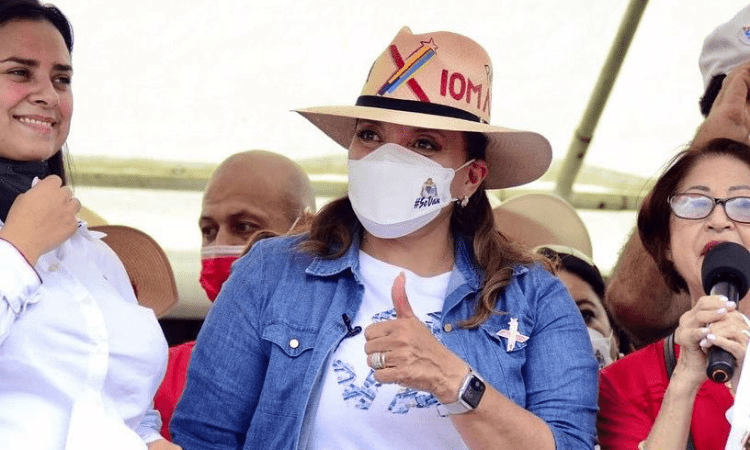 Castro’s announcement to side with China is an attempt to counterbalance US influence. (XiomaraCastroZ)

At 62, Xiomara Castro has become the first female president-elect of Honduras. She won the November 28 election with more than 53 percent of the votes, and her party secured the largest number of seats in Congress: 51 out of 128.

Castro, who will take office on January 27, 2022, has promised to establish diplomatic ties with the Chinese Communist Party, a move that implies snubbing Taiwan, the democratic nation that has been a Honduran ally for 80 years. Castro has her eyes set on Beijing to finance her campaign promises.

How did Xiomara Castro reach the presidency?

Xiomara Castro was born in 1959 in the capital city Tegucigalpa but moved to the tiny city of Catamas when she was 17. She holds a degree in business administration, and her husband is the former socialist President José Manuel Zelaya (2006–2009), a member of the São Paulo Forum.

After years working in charities and nonprofits, Castro entered politics in 2005, when she joined Zelaya’s presidential campaign. During her husband’s tenure, as first lady she oversaw the government’s welfare system and undertook diplomatic roles.

Zelaya’s presidency ended abruptly in mid-2009, when he triggered a political crisis by seeking to remove a constitutional ban on reelections. The Armed Forces expelled him from Honduras, and Nicaraguan dictator Daniel Ortega granted him exile. Two years later, Zelaya returned to the country to form a new political party, Liberty and Refoundation (LIBRE).

In 2013, Castro became LIBRE’s presidential candidate but lost the race to Juan Orlando Hernández of the conservative National Party of Honduras. In the 2017 election, Castro stepped down in favor of Salvador Nasralla, who unsuccessfully ran on behalf of an opposition alliance. Nasralla returned the favor in 2021 by endorsing her for president.

What is Castro’s political platform?

Castro campaigned on a platform that included increasing the minimum wage and overturning legislation that allowed ZEDEs, a type of charter city spearheaded by the Hernández administration to boost development in low-density areas. She has approached the International Monetary Fund (IMF) and the World Bank to renegotiate Honduras’s international debt.

The 10 major areas of her platform are:

What are the implications of Castro’s proposals?

The major hurdle to Castro’s ambitions is funding. Raising the minimum wage without first lowering public expenditure is unfeasible. There is not enough money in public coffers to finance such a policy.

To repeal the ZEDEs legislation her party needs an absolute majority in Congress, but even attempting to do so will scare away foreign investors interested in this industry. The same will occur with debt talks with the IMF and the World Bank, considering that her administration will shun austerity measures.

Castro’s platform follows the script of other socialist regimes in Latin America: a new constitution, nationalizations of strategic sectors, and government expansion through political patronage. Other warning signs include the community police—in Cuba and Venezuela they intimidate political opponents—and her willingness to undermine central-bank independence to finance government spending.

Similar policies have led the once prosperous and oil-rich Venezuela to authoritarian rule and poverty.

What has been Castro’s stand toward US versus China cooperation?

Taking another page out of the Latin American left playbook, Castro said on the campaign trail she would strengthen diplomatic relations with China to finance her ambitious infrastructure projects.

Since the turn of the century, the Chinese Communist Party has invested billions and granted loans to cash-strapped governments to increase its influence in the region. As part of Made in China 2025, an initiative to position the Asian giant as the global powerhouse in high-tech industries, Beijing has unveiled infrastructure projects in 19 Latin American countries.

Honduras is one of the 14 remaining nations that recognize Taiwan’s sovereignty and is a strategic ally for the United States. US officials have already urged the president-elect to maintain ties with Taipei. Likewise, Taiwanese officials have reached out to the incoming Castro administration.

According to Ismael Zepeda, an economist from the Honduran think tank Fosdeh, Castro’s announcement to side with China is an attempt to counterbalance US influence. “Honduras wants to enter into the dynamic of saying, ‘if you do not support me internally, I have another ally who will give me the resources I need if I want to build megaprojects,’” Zepeda told the Guardian.