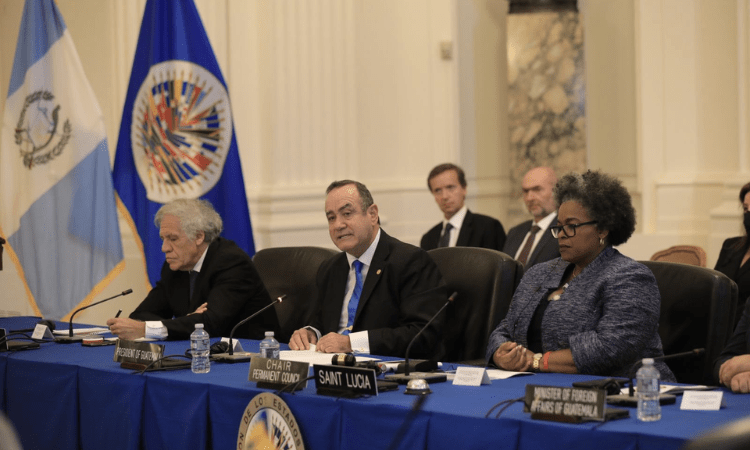 Giammattei challenged the IACHR for including Guatemala in Chapter 4B of its Annual Report. (Alejandro Giammattei)

In his visit to Washington, D.C., in late June 2022, Guatemalan President Alejandro Giammattei confronted US foreign policy. Giammattei’s statements should be a wake-up call for US citizens concerned about their liberty. The Biden regime is jeopardizing the democratic and economic stability of the United States and its historical allies.

Giammattei held meetings with US Homeland Security Secretary Alejandro Mayorkas and OAS Secretary General Luis Almagro. In these meetings, Giammattei addressed the need for an aligned migration policy and advocated for national sovereignty.

He also challenged the Inter-American Commission on Human Rights for including Guatemala in Chapter 4B of its Annual Report. This categorization includes the dictatorships of Cuba, Venezuela, and Nicaragua due to human-rights violations. Giammattei contends Guatemala is a democracy, which it is.

Giammattei also attended the International Religious Freedom Summit as a speaker. He advocated for life from conception and condemned the proabortion global movement that is attempting to impose its agenda on Guatemala. He also rebuked Biden’s attempt to get into bed with dictator Nicolás Maduro.

Giammattei’s firm, clear position during his visit to the United States contrasted with Biden’s limp, contradictory measures to tackle issues concerning the Americas, such as migration and drug trafficking. The Biden administration has not only weakened diplomatic relations with strategic ally Guatemala; it has trampled US values.

According to the United States, Giammattei has sided with corrupt officials such as recently reappointed Attorney General Consuelo Porras. She has prosecuted so-called impunity fighters in the country. One is Juan Francisco Sandoval, declared by the US State Department to be an anticorruption champion.

Upon closer inspection, Sandoval’s standing is less rosy. There were more than 50 malpractice complaints against him when he was fired as the special prosecutor against impunity.

According to Freedom House, Guatemala is a partly free nation. While it is a democratic country with fair and frequent elections, the presence of organized crime hinders governance and development.

The Giammattei administration has intensified the fight against organized crime. Since January 2020, it has confiscated 8 million quetzales ($1 million) worth of cocaine shipments and torn down 8 million poppy plants and 200 million coca plants. The Giammattei administration has also extradited 82 people for drug trafficking and 21 for other crimes to the United States.

According to Giammattei, the Guatemalan government is intercepting drug trafficking to the best of its ability. Giammatei explained to Breitbart that Biden has hampered these efforts by kickstarting negotiations with Maduro for oil to replace Russian imports.

Although the United States does not recognize Maduro as the legitimate president, a US delegation visited him in March 2022. The Justice Department had announced criminal charges against him two years ago for enabling narcoterrorism in Venezuela and collaborating with narcotrafficking. Since then, the US State Department has offered a $15 million reward for information leading to his arrest or conviction.

The contrast is flagrant, as exposed by Giammattei. On the one hand, the United States claims to fight drug trafficking. On the other, it promotes narcoterrorism with the hemisphere’s premier trafficker: Maduro.

The Maduro dictatorship has become a threat to the region due to its ties to drug trafficking and rogue states. Moreover, according to Freedom House, Venezuela is not free, and the ruling party has taken control of all government branches.

In the Breitbart interview, Giammattei revealed that 95 percent of the planes with drug shipments that land in Honduras, Guatemala, Belize, and Mexico leave Venezuela, and the United States accounts for 50 percent of global drug consumption.

With these figures, he suggests that Biden has turned a blind eye. In a similar vein, Giammattei also urged Biden to keep Title 42 in force and adopt a stricter migration policy. Biden’s ambiguity on illegal immigration has led to increased identity fraud from migrants and abuse of children by human traffickers.

Guatemala Is an Ally against China

US Vice President Kamala Harris, who is in charge of US diplomatic relations with the Northern Triangle (Honduras, El Salvador, and Guatemala), has barely met with Guatemalan officials. In June 2021, during a three-day visit to Guatemala, she feigned interest in working with Giammattei to address corruption, illegal migration, and organized crime. She spent most of her time having a powwow with the so-called National Entrepreneurs Council and other NGOs that promote progressive cronyism.

When Castro was a presidential candidate, she pledged to strengthen relations with China and develop several ambitious infrastructure projects, likely with Chinese backing. Since Honduras is one of the 13 last countries that still have full diplomatic relations with Taiwan, US officials requested Castro maintain the relationship.

Castro has followed that advice so far and maintained diplomatic relations with Taiwan. In return, she wants favors such as debt renegotiation with Taiwan and multilateral organizations.

A perhaps unforeseen outcome of debt forgiveness is China coming to offer more debt in its place. If the United States lends money to Honduras to reduce its economic dependency on Taiwan, Honduras can partner with the Communist Party of China (CCP).

In contrast, Guatemala is Taiwan’s strong partner. Recently, Giammattei acknowledged the support of this nation in an official event. “Taiwan has been the best and sole ally we have had in this administration,” he said, suggesting his opposition to dealing with the CCP.

Instead of condemning Giammattei because of the attorney general appointment, US officials should support the Guatemalan government in strengthening the rule of law. Geopolitically, Guatemala is a strategic partner for the United States that advocates for US values: life, liberty, and property.

Giammattei is willing to work closely with the Biden administration in the fight against organized crime, including drug and human trafficking. This could be the first step toward putting US foreign policy back on track.