How Guatemala Is Fighting for America's Freedom
Skip to content 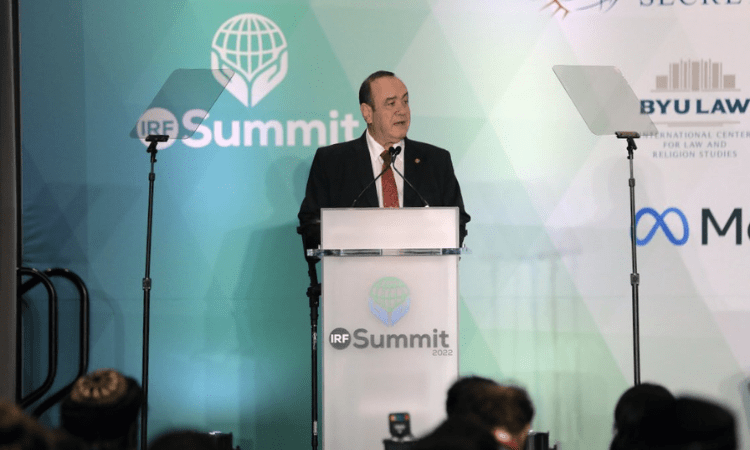 Guatemala is in a fight for liberty against the globalist, tyrannical movement that wants to transform the United States into a dictatorship.

Guatemalan President Alejandro Giammattei is trying to free his country from Biden-regime domination. Americans better pay attention to the leviathan Giammattei is up against, because that leviathan intends to devour them too.

Prosecutor General Consuelo Porras, whom the State Department (DOS) has arbitrarily sanctioned as corrupt, is prosecuting criminal former judges and prosecutors Biden installed. Biden’s team supports them, including with refuge in the United States. Giammattei has denounced this in interviews and speeches, including in Washington, D.C.

With DOS under increasing scrutiny by some Republicans in Congress, the globalist Inter-American Commission on Human Rights (the commission) placed Guatemala in its Chapter 4B designation for major human-rights violators. A Biden administration official said this “gives the State Department arguments for stronger sanctions against Guatemala.”

The commission’s report, which reviews 2021 events, in turn cites DOS statements. Globalist circular reasoning is plain to see. Apparently, the commission believes 4B status for Cuba, Venezuela, and Nicaragua gives its attack on Guatemala credibility.

The commissioners know there are no meaningful effects on the three dictatorships, which ignore the commission. Guatemala, however, has answered the bad-faith charges. On June 28, Giammattei told the OAS Permanent Council the commission had violated its own rules.

The key charge is that Guatemala has attacked judicial and prosecutorial independence. Giammattei said he was democratically elected and has no authority over the judiciary or (unlike the US president) over criminal prosecution.

The commission’s report condemned as corrupt the charges against DOS-favored former judges and prosecutors. Giammattei said those charged abused power and violated due process and human rights.

The commission has no role in a country’s judiciary, and yet it has decried cases still in litigation and failed to follow its own procedures. Giammattei said the commission’s allegations undermine his country’s institutions and are “a grave methodological error showing clear ideological activism, lacking objectivity.”

Giammattei’s line is an understatement for information warfare with lies, distortions, and omissions of truth. The goal is to defeat a democratic, ideological enemy and install a socialist dictatorship.

The commission stated Guatemala “prioritizes the protection of the rights of the unborn from the time of conception, to the detriment of the rights of women.” Giammattei noted the content of the OAS American Convention of Human Rights. Chapter II, Article 4.1: “Every person has the right to have his life respected. This right shall be protected by law and, in general, from the moment of conception.”

On June 29, Giammattei told the 2022 Summit of International Religious Freedom that he took an oath to defend Guatemala’s constitution. It defines life as beginning at conception. By contradicting its own fundamental document, the commission has revealed its ideology and willingness to do anything for its political agenda.

The key protagonist for the OAS commission and DOS is former Guatemalan prosecutor Juan Francisco Sandoval. DOS gave him an anticorruption champion award. Both institutions claim Sandoval was “independent and impartial” and his firing indicates a return to corruption.

When Porras fired Sandoval, she mentioned the Asodefir case that Sandoval had obstructed for two years. It stemmed from a Department of Homeland Security referral about money laundering of USAID funds. Ten months later, Sandoval’s successor obtained 13 arrest warrants alleging the accused used US money to buy bank shares.

DOS and the commission claim the many (about 58) charges against Sandoval are bogus. One came from the solicitor general for usurping his authority, another from a judge for having coerced false testimony for trial. DOS and the commission mentioned demonstrations supporting Sandoval after his firing, even though two participating organizations had received USAID funds.

Totalitarian tyrants accuse their foes of being what they are and of doing what they do. This explains characterizing the January 6, 2021, events at the Capitol as an insurrection while excusing riots facilitated by Democrat mayors and governors as peaceful protests.

Giammattei, his congress, and his people saw the disaster of the politicized justice Biden promoted in their country. They have risen up against it.

The Department of Justice illegally using counterintelligence techniques against parents because they rejected Biden partners propagandizing their children is totalitarian. Politicized justice means the DOJ does nothing to stop illegal protests at the homes of Supreme Court justices, while it persecutes anyone tangentially connected to Jan 6.

Guatemala and the United States both face a profound confrontation between liberty and tyranny. If tiny Guatemala can stand up to the leviathan, US citizens can recognize the tyrants now governing us and defeat them.